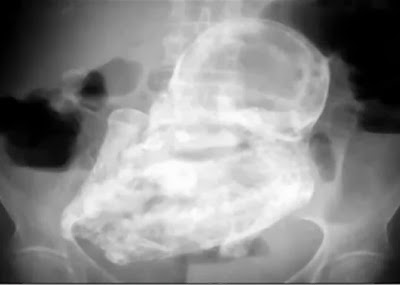 Last week, it was revealed that the stomach pains plaguing an elderly woman from Colombia were the result of a 40-year-old calcified fetus.

The woman, 82, entered Tunjuelito Hospital in Bogota with stomach pains, which the medical staff initially presumed to be gastroenteritis.  Further tests revealed that the woman was carrying a lithopedion, or a "stone baby"- a dead, calcified fetus which is the result of an ectopic pregnancy in which the fetus is formed in the abdomen outside of the uterus.

This rare occurrence, first documented in France on 1582, occurs in less than 2% of all abdominal pregnancies which, in turn, account for only one out of 11,000 overall pregnancies.  To date, only 300 lithopedic pregnancies have been recorded in medical literature.

Lithopedions are formed when a fetus outside the uterus dies and the mother's body calcifies the fetus in order to protect the rest of the body from infection.

According to the New York Daily News, the unnamed woman is scheduled to have the lithopedion surgically removed.