Katzenklavier: Everything you wanted to know about cat pianos 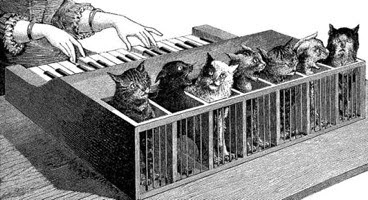 From hideous weapons of war to outrageously bizarre fashion trends, the mind of man has shown its capability for madness in staggering ways- even when it comes to the design of musical instruments.

One such instrument is the katzenklavier, a cat piano reportedly designed in the 17th century by German Jesuit priest and scholar Athanasius Kircher (though some scholars insist that Kircher only described the instrument, and did not invent it).  Kircher's mad contraption featured a menagerie of cats, arranged in order by the pitch of their meows and tethered to a keyboard by their tails.  By striking a piano key, a sharpened nail would poke the unfortunate feline, producing a sweet melodic note that would make the Marquis de Sade proud.  We're pretty sure Athanasius Kircher was not a member of PETA, by the way.

While not many (if any) katzenklaviers were actually manufactured, the bizarre instrument was held in high regard by many psychiatrists right up until the 19th century.  One such psychiatrist, Johann Christian Reil, published an 1803 manual on the treatment of psychiatric disorders.  In his manual, Reil suggested that the behaviors of psychiatric patients might be changed if they were forced to attend a katzenklavier concert.   This recommendation, naturally, coincided with Reil's highly-regarded opinion that the best way to treat chronic depression was to have the patient visit an African village brimming with pestilence, and saying, "See? You don't have it so bad, so shut your damn pie-hole and stop crying like a baby."  At least we think that's what Reil said; much of his writing has been lost in translation.

As strange as some of his treatment methods may have been, Reil is still regarded as the father of modern psychiatry.  It was Reil, in fact, who coined the term "psychiatry" in 1808.  Two years later, Riel was appointed professor of medicine at a university in Berlin, and went on to make a name for himself as one of the leading medical men of Europe.

The purported inventor of the cat piano, Athanasius Kircher, also attained high acclaim as a scholar, in spite of his odd ideas.  In a biography of Kircher written in 2012 by John Glassie, the author writes that while "many of Kircher's actual ideas today seem wildly off-base, if not simply bizarre," Kircher was a "champion of wonder, a man of awe-inspiring erudition and inventiveness."