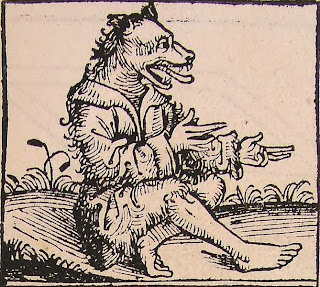 We are all familiar with the "traditional" depictions of ghosts, from the chain-dragging tormented souls who wail and groan in the lonesome hours of night, to the ethereal ladies clad in white who float through space in chilly castles and then disappear in the blink of an eye.  From the downright spooky to the ephemeral, chances are that if you try to envision a ghost, you will invariably conjure up a stereotypical image of what a ghost should look like.

However, there are many ghosts who do not fall into the "traditional" category- at least in terms of appearance.  Many witnesses have claimed to have seen ghosts that are zoomorphic; that is, ghosts which manifest themselves as part human and part animal.  Not all zoomorphic ghosts are hybrids, however.  In some cases, entities may be able to "shapeshift" between human and animal form (theriormorphy).

Zoomorphy has long played a role in human civilization, most notably in mythology.  From the jackal-headed Anubis of Egyptian mythology to the minotaur of the Greeks, animal-human hybrids have held a place in the pantheon of religion since time immemorial.  Yet, there is a very clear distinction between myth and reality; while there is no evidence supporting the existence of creatures such as centaurs and minotaurs, the modern historical record does present us with some rather interesting and detailed accounts of zoomorphic ghosts.

One on the most bizarre ghost sightings on record took place in St. Mary's, Ohio, in the summer of 1891.  In a house which had once been the scene of a gruesome murder and several unexplained deaths, the children of Charles Henderson reported seeing a ghost with a man's body and a mule's head.

From the August 21, 1891 edition of the Pittsburgh Dispatch:

St. Mary's, O., Aug. 20.-- The people of Byer, a small village in Jackson county, are all torn up on account of a haunted house.  The building is a cheap structure, built by Thomas Woods, who lived in it and kept a saloon.  Five years ago a cheap jewelry peddler stopped in the house over night, and next morning was found dead in bed with his throat cut from ear to ear.  Since then five persons have died in the house, viz: Thomas Woods, Walker Benson, Tressa Byers, Mrs. Thomas Woods and James Serry.

Some time ago the place was rented to Charley Henderson, and the very second night his family moved in strange noises were heard and tables and chairs were hurled about the room by no visible means.  The children screamed and say they saw a man with a mule's head.  The frightened family moved out at midnight, refusing to wait until morning.  Citizens say they heard strange noises while setting up with the last one who died there.  Mr. Ray, the present owner, had two men sit up in the house, but they declined to stay after midnight owing to the queer proceedings there.  Unless his nerve fails Mr. Ray will try a night of it himself, and report if he lives through it.

Another chilling and well-documented sighting of a zoomorphic ghost took place in Henrico County, Virginia, in 1903.  This ghost appeared as a woman's head on a dog's body.  Like the aforementioned mule-headed apparition, this ghost was also seen by more than one witness.  From the April 10, 1903 edition of the Richmond Times Dispatch:

The one thing which acted more effectually than the appearance of county officers to eject Charles Cooke, a well known farmer, from certain Henrico property, which he had been ordered to leave, was the fearful apparition of a ghost-- a giant dog with a white woman's head.  The man pulled up at once and yesterday moved down in Varina District where he hopes to be out of harm's way.... (Cooke) said that for several nights past about 10 o'clock the premises have been visited by a most fearful apparition-- a ghost, which takes the shape of a dog with a woman's head.  It gets into the yard and scatters the milk pans and the wood pile, uttering the while most horrible noises.  Upon some occasions it comes up to the door and rattles the knob.

Cooke showed the deputy two pistols he had armed himself with as a means of protection against the ghost.  Still he wanted to get out of the place, and hence he was moving.  He had chosen a house about ten miles down in Varina District, where, he hoped, the ghost could not follow... An old white woman who lives in the same house with Cooke declares that all he says concerning the ghost is absolutely correct.

The mule-headed ghost of Ohio is a classic case of theriocephaly, which refers to a human form with an animal's head.  Theriocephalic beings figure prominently in many world religions, such as the Eastern Orthodox religion, which often depicts St. Christopher with the head of a dog.  Theriocephaly also plays a role in cryptozoology.  Since 1887, residents of Michigan have reported seeing a creature described as a human being with a dog's head.  The "Michigan Dogman" was first encountered by lumberjacks in Wexford County.  Unfortunately, lumber camps of the era were populated by men with a propensity toward whiskey and storytelling, so it is unlikely that theriocephalic beings exist in the material world outside of campfire tales and carnival sideshows.

As for zoomorphic ghosts, far less has been written on the subject.  Are these bizarre apparitions mere ghosts or sinister beings of a demonic nature?  Perhaps only the six unfortunate residents of Byer, Ohio, who mysteriously died in the house built by Thomas Woods know for sure.