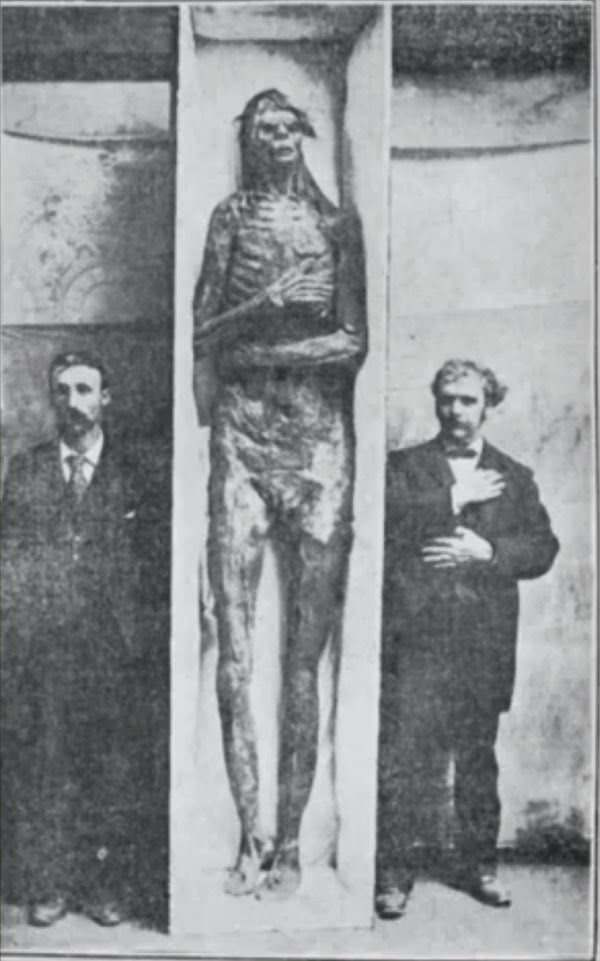 One of our favorite topics of research on Journal of the Bizarre is the theory that an ancient tribe of giants once roamed the untamed wilderness of North America.  There is ample historic documentation of giants in America, such as the journal of Captain John Smith, which tells us of his 1608 encounter with 60 eight-foot-tall giants of the Susquehannock tribe which populated much of Pennsylvania (before their mass extinction in the 18th century).  Another topic we find interesting, of course, is paranormal activity.  Therefore, it should come as no surprise that we absolutely love coming across newspaper articles which blur the boundaries of both.

During the late 19th and early 20th centuries, when vast networks of roads and highways were being built across America, it seemed that construction crews were always turning up the bones of ancient giants.  Farmers, while tilling their fields, would dig up their enormous bones.  Archaelogists would frequently encounter giant skeletons in burial mounds, and such discoveries became so commonplace that they hardly warranted a mention in newspapers of the era.  (In his book "The Ancient Giants Who Ruled America", author Richard Dewhurst shares dozens of period newspaper articles which describe these discoveries- it is definitely worth reading)

Two of the more interesting stories about the afterlives of these ancient giants also take place in Pennsylvania, which is, after all, the home of the giant tribe known as the Susquehannock (or Andaste, as they were known to early explorers who encountered them).  Based on these accounts, it would appear that the long-dead giants didn't take too kindly to their graves being tampered with.

The first appearance of these ghost giants occurred in 1900, and was witnessed by several residents of the village of Mordansville, in Columbia County, which is a region once heavily populated by the Susquehannock.  From the September 13, 1900, edition of the Bloomsburg Columbian:

While two young men were driving across the bridge a few evenings ago (Ed. Note: this would most likely have been the site of the bridge on Robbins Road that once crossed Little Fishing Creek) their horse suddenly stopped, refusing to go forward, and showing every evidence of fright, although they could see nothing... Becoming alarmed they called loudly for assistance and when some of the villagers arrived, carrying lanterns, they declare they saw a large skeleton standing directly in front of the animal... The ghostly visitor was distinctly visible to both the young men in the buggy as well as to the villagers... Since that evening the apparition has been seen by several people, its latest visit being Sunday night, when it appeared to two young girls who... assert positively that they saw the skeleton, which they declare was at least eight feet in height.

One week later, the newspaper was still reporting on the giant ghost.  From the September 20, 1900, edition of the Bloomsburg Columbian:

Mordansville still has its ghost.  A resident of that village informs us that it appears almost nightly at one end of the bridge, looks to be about ten feet tall, is clothed in flimsy material of immaculate white, and makes a noise similar to a big wagon.  He also says that travel over the bridge after nightfall has greatly decreased.


Twenty years later, the site of a burial mound in western Pennsylvania was haunted by ghostly giants, which were even witnessed by the archaeologists themselves who were excavating the burial site in South Huntingdon Township.  Things got so creepy that the constable was called in to investigate.  Word of the haunting spread all over the country, even as far away as Texas.  This is what the El Paso Herald had to say on December 28, 1920:

Greensburg, Pa., Dec. 28-- The famous mound-builders' mound in South Huntingdon township has suddenly taken on life and the eight-foot inhabitants of olden days, according to the best-informed scientists, lay down to their eternal sleep, have just as suddenly started stalking out at nights... so strong has become the belief that all is not well within the famous mound, which is 300 feet long and 12 feet high, that Dave Kelly, the high constable and custodian of the peace in and about Gratztown, a mile from the mound, has been asked to investigate.

First news of the stalking of the ghosts of the ancient mound builders- for that is what the night prowlers are believed to be- came on Halloween night... But when on Armistice night Cy Brown and Sue Smith happened to be passing there and saw the same eight-foot apparition, Cy simply stepped on 'er- that is, on the gas, for he owns an auto, and made haste for the Armistice ball.  Cy admits he wasn't scared...but those who saw him start home with Sue that night claim he took a five-mile detour to get home.

Some time ago Dr. W.J. Holland and his assistant, from the Carnegie museum in Pittsburg, invaded the quietness of the mound-builders' tomb and removed from it one of the eight-foot specimens.  Whether this has angered the ancient denizens of the mound is a question the populace hereabouts is unable to determine so far.

While many people believe that tribes of giants once roamed America, the two stories mentioned above may prove that the ghosts of these ancient giants may be roaming around the country as well.