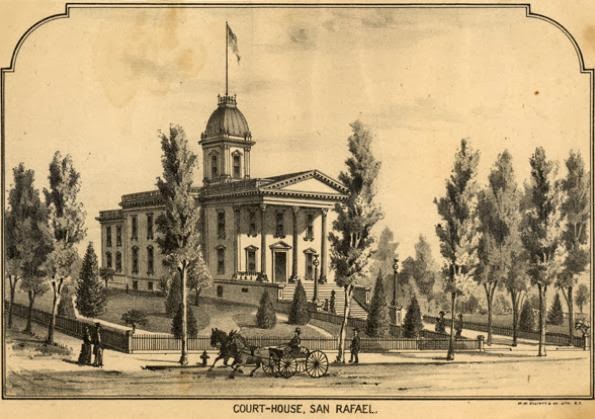 Although Marin County, California, is home to San Quentin- one of the world's most notorious prisons- in the late 19th century it was the tiny county jail in San Rafael which Californians feared the most... on account of a frightening apparition of a man named Argo, who committed suicide inside his cell. Argo's ghost was witnessed by dozens of inmates for a period of several years, and the spirit was so terrifying that some inmates threatened to take their own lives unless they were moved to a different part of the jail.

One of the most interesting stories of the haunted jail comes from 1897, when an inmate named Annie Kehoe vividly described the ghost who visited her in her cell to the deputy sheriff and the county treasurer.
From the April 13, 1897, edition of the San Francisco Call:


San Rafael, Cal., April 12.-- Once again has the ghost of Argo made its appearance in Marin's county jail.  This time a woman, Annie Kehoe, saw it, and to escape from its evil influence dragged a bed from the haunted cell, where ghastly figures taunted her, into an adjoining cell, only to find that the apparition, with its uncanny scare and low moaning, followed.

The woman told her story to Under Sheriff John Hannon to-day. It is the same as that told by other unfortunates who have been locked in the haunted cell and been compelled to spend a night with the ghostly visitor.

"I'll bet you a thousand dollars to a nickel that I saw a ghost, if my life is worth it," said she in reply to a taunt that she was only dreaming. "I was lying on my cot when I saw a man crouching on the floor right near the tanks. I was terribly frightened and the man was constantly moaning, He was dressed in dark clothes and wore a large, black slouch hat with a big brim and seemed to have two coats on."

County Treasurer J.T. Fallon, who was under sheriff at the time prisoner Argo killed himself in the cell which he is now said to haunt, was sent for and Annie Kehoe repeated the description of the ghost to him. He said that she described Argo minutely and that at the time Argo committed suicide in the cell he had on two coats and was dressed and looked as described by the woman.

Annie Kehoe was arrested last Thursday for petty larceny, she having been charged with stealing a woman's wrap. To-day she was before Justice Rodden of San Rafael and was acquitted. When she returned to the County Jail for her belongings she showed the Under Sheriff and Treasurer Fallon where the ghost crouched. Her bedding was on the floor in the adjoining cell, whither she had dragged it in her efforts to escape from the apparition. She said that she saw the ghost of a Chinaman also. She described her thrilling experience vividly and when she left the prison this afternoon she exclaimed: "Thank God, I won't have to spend another night in that terrible place."

The ghost has been seen by other prisoners before. Murderer Kelly, who stabbed a fellow-convict at San Quentin prison and who was tried at San Rafael for the crime, spent a night in the haunted cell, and was found in the morning by the Sheriff's deputies in a frenzied state. He said a ghost had visited him, and that he would commit suicide if the sheriff would not take him out of the cell rather than pass such another night as the one he had just gone through.

Argo, whose apparition is causing all the trouble, was arrested for some petty offense and confined in this cell. The next day his lifeless body was found on the floor, and since that time prisoners have repeatedly said that they have seen his ghost.

A Chinaman, who had never heard of the stories in regard to the cell and who was unable to read English, related the same tale as did Annie Kehoe. The mystery has never been explained, and tramps without number, who have heard of the ghostly visitor, have given San Rafael a wide berth for fear of being confined in the haunted cell.

"I cannot account for it," said Under Sheriff Hannon, "but it is a fact that the descriptions of the apparition tally in each instance."

Further reading on the ghost of William Argo and the haunted Marin County jail and courthouse:


The San Francisco Call, January 27, 1896. William Argo's spirit seats itself upon the edge of the prisoners' bunks and watches. Lee Doon, a condemned murderer, claimed he saw the ghost almost every night.