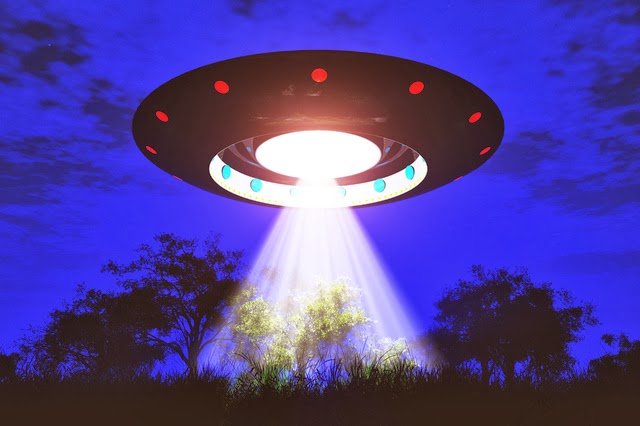 Although the term "UFO" wasn't coined until 1956 (by Edward J. Ruppelt, of Project Blue Book fame), Americans have spotted unidentified flying objects in the sky since the earliest days of our nation's history. Today, we bring you some interesting historical accounts of UFO sightings which took place in America long before words like "flying saucers" and "alien spacecraft" entered the lexicon.  The following accounts appeared in reputable newspapers across the United States during the late 19th century.

Numbers of colored people living in lower Fairfax county, on the line of the Mount Vernon Railway, are considerably exercised over strange lights which they allege they beheld in the sky last night. The exact description of the pictures they gazed on is not given, but the more antiquated "uncles" and "aunts" among them declare they were similar to those visible in the early part of the year 1861, previous to the beginning of the late civil war, and prophesy dire calamities in the near future. (Alexandria Gazette, November 2, 1893)

Not withstanding that this is the first day of April the newspapers of Kansas City will devote a great deal of space tomorrow morning to matter descriptive of the "air ship", concerning which reports have been coming in from Kansas towns for nearly a month past.  At 8 o'clock tonight, according to the solemn declarations of many reputable citizens of Kansas City, Kans., the strange lights appeared in the sky south of that city and caused the liveliest interest among the people.  To those who saw the lights, all talk of Venus or other planets will not be listened to.  As one man put it: "Venus does not go zigzag and crisscross along the horizon," as they declare this light does.

The Times will also print interviews with several well known citizens of Kansas City, Mo., who claim to have seen the lights.  All who observed the strange occurrence agree that the lights disappeared in a northwesterly direction about 8 o'clock.  Following these statements comes a sensational dispatch from Everest, Brown county, Kans., some sixty miles northwest of this city, to the effect that the "air ship" appeared there shortly after 9 o'clock. (Los Angeles Herald, April 2, 1897)

Passengers on the ferry, Augusta, coming from Davenport shortly after 8 o'clock last night were positive they saw the air ship. There were 25 on board and all gazed in wonder at a strange light, this time in the eastern heavens. The sky being overcast there was no opportunity to confuse the spectacle with stars, and all were satisfied they saw the illuminated moving object.  Robert Solomon, of the Augusta crew, had the boat whistle blow a salute to the passing ship to keep to the right, but it disregarded the marine laws and failed to acknowledge the signal.

Solomon, afterward speaking of it, said "the light appeared off in the east end up the river. It seemed about the head of the rapids and moved swiftly in a southerly direction. Almost as we gazed it seemed to cross over the upper part of Rock Island, and cut across the lower part of Moline, and the east end of Rock Island and finally disappeared in the south east." (Rock Island Argus, April 14, 1897)

A strange light, resembling accurately the one seen over Minneapolis on April 10, was seen over Spokane this evening between 8 and 8:30 o'clock. It was moving west by northwest, which course would bring it over Puget Sound in a short time. James L. Ford, a reputable salesman of this city, who lives in Whiting's Addition, about two miles from the center of town, first saw it at 8 o'clock and describes it as follows:

"When I first saw the it it must have been two miles high. It was moving faster than a star and seemed to be hovering over the town. It suddenly dropped several hundred feet, but it was too dark for me to make out its outlines, although the sky was clear. The light was larger than anything I ever before saw in the heavens. It occupied a space of four or five inches, according to my sight, in the sky, which means that it must have been of great size. While I watched it the light turned from an intense white to a light green. It slowly passed over the town and twenty-five minutes after it was first seen it disappeared beyond the northwestern horizon, seemingly sinking." (The San Francisco Call, April 16, 1897)

A strange light appeared in the sky here about 8:45 o'clock this evening. It was entirely unlike northern lights. Those who studied it could only conjecture that it might be the reflection on the clouds of a powerful search light, but it did not move rapidly or by starts. It was plainest when it first appeared. It was then in the East. It moved slowly toward the south, fading out and appearing again at intervals. It then travelled in a southwesterly course. At times it was almost directly overhead. It vanished entirely in less than three quarters of an hour. The superstitious connected the light with the threatened war. (New York Sun, March 16, 1898)

While the incident at Roswell in 1947 is often credited with spurring public interest in UFOs, these 19th century sightings are perhaps more revealing, since they took place during an era when the skies were essentially devoid of flying machines. These sightings took place before airplanes, weather balloons, satellites, and other objects which could be mistaken for "flying saucers" were even invented.

Although the first flight of a zeppelin took place in 1900, blimp-like "airships" have been sailing the skies since the Civil War era. In 1852, Henri Giffard became the first person to make an engine-powered flight in a steam-powered airship; twenty years later, Paul Haenlein flew an airship with an internal combustion engine powered by coal. Between 1884 and 1885, Gaston Tissandier made seven successful flights in an electric-powered airship. Between 1888 and 1897, Dr. Frederich Wölfert built three airships powered by Daimler petrol engines, the last of which burst into flame mid-flight and killed both occupants in 1897.

Do these blimp-like airships explain the Victorian Era UFO sightings listed above? Perhaps, although the witnesses reported flight activity very uncharacteristic of blimps, zeppelins, and other early airships, such as the mysterious aircraft observed in Kansas City which seemed to zig and zag across the sky, or the gigantic craft observed in Spokane which glowed various colors while hovering above Puget Sound.