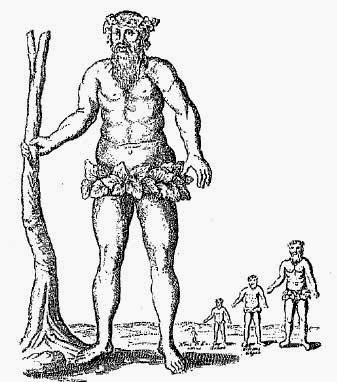 Crawfordsville, the county seat of Montgomery County, has long been the focal point of Indiana urban legend and myth. It is the home of the regionally-famous "Crawfordsville Monster", an oozing amoeba-like cryptid which was the topic of an episode of MonsterQuest on the History Channel. While the "Crawfordsville Monster" was proven to be nothing more than a flock of killdeer flying in close formation at low altitudes, history records Crawfordsville as the home of other bizarre inhabitants-- it was once home to a tribe of ancient giants.

In December of 1892, newspapers across the nation reported on the exciting discoveries made by archaeologists digging in a gravel pit near Sugar Creek. Twenty-five gigantic skeletons were unearthed by archaeologists and students of nearby Wabash College. One detailed account of the amazing discovery appeared in the December 16, 1892, edition of the Cambria (PA) Freeman:

Skeletons of an Ancient Race Unearthed in Indiana

A rich archaeological find was recently unearthed two miles west of Crawfordsville in a gravel pit along the high bluffs of Sugar Creek. Thus far twenty-five skeletons of Brobdingnagian stature have been exhumed, and the unburying of these mammoth bones is still going on. This necropolis of long ago is filled with excited hunters of curios and scientific students from Wabash College almost continually, and as soon as removed from the gravel their rattling bones are carried away to become part of departments of archaeology, which are being established all over the city.

The last skeleton taken from the burial ground was a gigantic one, measuring seven feet in length. The femur alone would prove that the skeleton was that of a giant, and the pelvic bones are twice as large as those of an ordinary man. The grinning skull of the giant had a perfect set of teeth, not one cracked or decayed, and with an enamel as beautiful as polished marble. The bones were perfect in every detail, notwithstanding the fact that they must have been interred here for centuries. The entire absence of vegetable matter in the soil and the perfect drainage would account for the preservation of the bony structure.

Of the whole number of skeletons thus far found only two indicate immature development, the remainder representing the framework of a race of men evidently extinct for centuries. This is certainly the first discovery of skeletons in which the characteristic development of giants has been observed. It is thought by local scientists that these bones belong to a tribe of aborigines, but this theory cannot be fully established by the material structure of the skeleton.

Although no implements or ornaments were found buried with the bones, yet in close proximity many instruments of warfare and domestic utensils were found. They are mostly composed of stone, though some are composed of copper and a few of shell and bone. The stone implements are flint spears and arrow heads, and appear to be wrought with exceeding great skill. Pottery is found in great abundance. For many years specimens of these pots have been unearthed in this region, especially along the banks of the creek.
None of these skeletons was found in a separate grave, they being for the most part piled together in one conglomerate mass. Ten were found in one place in close contact, facing the setting sun, and arranged in a sitting posture. Many of the bones found farther down the bank, and in a soil in which there was more vegetable matter, crumbled to dust as soon as exposed to the atmosphere, and the symmetry of a single bone could not be distinguished.

Many traditions have been brought out since this discovery. One old settler has called to mind the fact that fifty years ago a tree was uprooted on this same spot, exposing three skeletons of gigantic dimensions, and as they were beneath the tree, it must have sprung up long after the bodies were buried.

Gen. Lew Wallace says he remembers the actions of a stranger who several years ago spent many months digging along the banks of Sugar Creek in search of a gold spoon supposed to have been buried long ago when this part of the country was inhabited by savage tribes, and the owner of the land on which these remains were found calls to mind a tradition often related by his grandfather that a Spanish treasure had been buried here in the long, long ago, when the country was a wilderness and Chicago a barren waste of impenetrable swamps.

The excavations are being continued, and it is thought that rich developments are in prospect, for there is not a foot of the soil removed that does not contain some relic or grinning skull.


Where Have All the Skeletons Gone?

We've published numerous posts about America's ancient giants, whose bones have been found by archaeologists throughout the United States during the 19th and early 20th centuries, and one of the most frequently asked questions we receive is "Whatever happened to all of the giant skeletons?" With dozens of similar well-publicized discoveries of gigantic human skeletons, one would think the the Smithsonian, as well as every other natural history museum, would be packed to the rafters with the bones of dead giants, yet this is not the case. In fact, many contemporary archaeologists and anthropologists thumb their noses at those who insist that an ancient tribe of giants once dwelled in the American wilderness-- in spite of ample historical evidence proving otherwise. For an explanation, we turned to our own Marlin Bressi, who has an interesting theory about the mysterious disappearance of giant skeletons:

"We have to bear in mind that the majority of these archaeological discoveries were made in Darwin's lifetime, or shortly after his death, and that scientific opinion was equally divided among those who supported Darwin's theory of biological evolution and those who supported Creationism. Naturally, the existence of a giant race of humans would be contrary to the beliefs held by Darwinists, who argued that man evolved from smaller and lesser species. The possibility that our ancestors were powerful giants who would tower over us- a superior species, at least physically- posed a serious threat to the credibility of Darwinists, therefore the "incriminating evidence" had to be destroyed. This would apply especially to atheistic evolutionists, since the existence of giants invariably brings to mind the Biblical Nephilim and other "giants" of the Old Testament. Since the leading scientific institutions of the day were helmed by staunch Darwin supporters, it would be in their best interest to destroy these skeletons. I believe that it is by no coincidence that Darwin's theory wasn't universally accepted until the early 20th century, immediately after scientists stopped digging up giant skeletons in America."

Whether giants roamed the wilderness of Indiana is a topic open to debate, but it perhaps fitting that Wabash College- located just two miles from the ancient burial ground- decided to choose a nickname for its athletic teams twelve years after the archaeological excavations. The team name they decided to go with? The Little Giants.