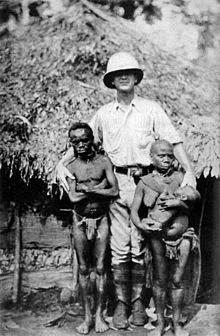 Many have written articles on the tribes of ancient giants who once called America home, but far less has been written about the archaeological discoveries which point to the existence of a pygmy race that once inhabited the wilderness regions of America. According to many renowned historians, such as John Haywood (known as the "Father of Tennessee History") and Joseph Henry (who served as the first Secretary of the Smithsonian Institution), an ancient race of pygmies- measuring no more than three feet from head to toe- once populated White County in Tennessee.

In his 1823 work The Natural and Aboriginal History of Tennessee, Haywood states that skeletons belonging to a pygmy race have been unearthed in the vicinity of Sparta, in central Tennessee, as early as 1820 and that news of these discoveries were published in the Nashville Whig newspaper. The finder of the first pygmy skeletons was a man identified as Mr. Lane, who unearthed bones on his farm, which appeared to be human, inside of a tiny grave measuring two feet in length, 14 inches in width, and 16 inches in depth. The skull was abnormally large, causing Mr. Lane to wonder if the bones might have belonged to a monkey. Although many of the bones immediately disintegrated when brought to the surface, Lane sent the remainder of the skeleton to Nashville to be examined by medical experts, who determined that they were indeed the bones of a full-grown human. Next to the tiny skeleton were found three clay vessels and two conch shells.

Three days later, on July 29, Mr. Lane visited the farm of a neighbor, Captain Simon Doyle, to search for more graves. The men found two more graves belonging to pygmies, both skeletons measuring no more than two feet in length. Once again, the skeletons were found to be buried with clay vessels and conch shells. Haywood writes about the discoveries in great detail in his 1823 history, and indicates that many more dwarf skeletons were found in the vicinity:

The graves lie promiscuously through the farm of Mr. Lane. But, at Mr. Anderson's, where Captain Doyle now lives, there is a large and closely connected burying ground, all of the description already given; and there are others of the same description four miles south of Sparta. Mr. Anderson formerly opened many of them. Capt. Doyle, the present owner, has opened several of them; and they both say, they believe hundreds might be found there.

Unlike most aboriginal burial grounds in Tennessee, the pygmies did not build burial mounds. Instead, the dead were placed in shallow graves, with a large flat rock covering the hole. Haywood states that the pygmy graves could be located with ease by striking an iron rod about a foot and a half into the ground until it struck stone. Once the covering stone was removed, the bones could easily be seen.

On August 1, 1820, Mr. Lane and his son, Jacob A. Lane, Esquire, went in search of more pygmy graves, and located one which was slightly different from the others. In this particular grave, the dwarf was placed on his back with its knees drawn up and its head raised so that its chin rested against its breast. This pygmy, measuring 2 feet 10 inches in length, was buried with a circular shell with two holes, two circles, and a cross carved into it. This trinket was not found in any of the other graves. Five feet away from this grave was found another skeleton belonging to much larger man. It measured 5 feet and 5 inches in length and was buried in a highly peculiar manner, possibly indicating that the skeleton belonged to someone of great importance to the tribe. On pages 204-205 of The Natural and Aboriginal History of Tennessee, Haywood states:

It was large, constructed after the manner of a coffin, the head 14 inches broad, the elbows 22 inches, and the foot 10 inches. The sides and ends were lined with flag rock, after the manner of the small graves, but not quite so deep, it being only 12 inches. In this grave lay a person 5 feet, 5 inches high; the head to the west, and the feet to the east. They uncovered the bones of this skeleton from head to foot, without moving and bone, until they had a full view of the entire skeleton. It was not shrouded, for its mouth was extended, wide open, and was full of teeth...  When they raised the skull, a great number of hairs were found sticking to it, which seemed to be the hairs of the head of the person interred. They were fine and straight, and of a bright silver grey.

Haywood theorized that since this taller skeleton had all of its teeth, while all of the pygmy skeletons featured decayed teeth, that this grey-haired individual was the tribe's leader. He also believed that these Tennessee pygmies arrived in America from India, stating that the pygmies were buried in a manner consistent with "Hindoo customs". He speculated that the bones of the grey-haired man were "perhaps of some distinguished priest of Vishnu".

While the concept of ancient Hindu pygmies in central Tennessee may sound like the imaginings of some half-baked crackpot, it must be pointed out that John Haywood was perhaps one of the most brilliant minds of his generation, and one of the best-educated men in the state. Born in North Carolina in 1762, Haywood was the son of a prosperous tobacco farmer who studied law and was admitted to the bar at the age of twenty-four. He then served as the clerk of the North Carolina Senate before becoming the state solicitor general. In 1790, Haywood became the attorney general of North Carolina but soon retired to become a legal scholar. He then moved to Tennessee, where he founded a law school and served on the Tennessee Supreme Court. Considered to be one of the best legal minds in the South, he produced several legal texts which are still in use today, such as Duty and Authority of Justices of the Peace (1810), and The Statute Laws of the State of Tennessee (1831). In addition to legal matters, Haywood also wrote extensively on religion, philosophy, and history. In fact, Haywood County in Tennessee was named in his honor. So one would be hard-pressed to find a more reputable source than John Haywood. When an Internet blogger insists that ancient Hindu pygmies traveled from India to America, the idea should be taken with a grain of salt. But when a Supreme Court judge makes the claim, well, it's definitely worthy of some serious consideration.

Haywood believed that the Hindu pygmies originated in India, China and Tibet and then emigrated to Sarmatia (in present-day Iran) between the 5th century BC and the 4th century AD. From Sarmatia they migrated to Greece, and then to Finland. From there, the pygmies may have arrived in America via Greenland, or by migrating east to Ural and eventually crossing the Bering Strait.

In the 16th century, Italian historian Paolo Giovio wrote of pygmies in the Lapland regions of Finland and Sweden, so Haywood might have been on to something when proposing the migratory route taken by the Tennessee dwarves. Furthermore, there is ample proof of pygmy tribes having occupied India and China for thousands of years, right up to the present day; the Taron pygmies, for example, still occupy a region of the Himalayas near the borders of Burma, India and Tibet, while the Derung tribe of pygmies still inhabit the Yunnan province of China, which shares a border with Tibet. Haywood also described several implements made from a jade-like stone found buried with the Tennessee pygmies, and since jade is more readily found in places like India and China than in the American South, it stands to reason that these stone tools were not made in America.

Haywood's theory caught the attention of Joseph Henry, the famed scientist and inventor who served as the first secretary of the Smithsonian. Like Haywood, Professor Henry's credentials are impeccable; it is Henry who is credited as the discoverer of the electromagnetic phenomenon of self-inductance, and the "henry" (a measurement of electrical inductance) is named in his honor. In 1875, when Alexander Graham Bell was trying to iron out some quirks in the prototype of the first telephone, it was Professor Henry he turned to for advice.

Though Henry is best-known for his work in electromagnetic research, he possessed an insatiable curiosity for all things scientific, and in 1876 he sent a team of archaeologists to Sparta in order to procure specimens of the lost tribe of pygmies for exhibition at the Smithsonian. On October 7, they discovered the skeleton of a pygmy next to one of the old graves which Haywood had excavated decades earlier. This skeleton measured twenty-six inches in length and belonged to an adult male. Newspapers throughout the country published the story of this find, such as the Bloomsburg (PA) Columbian, which stated:

The thighs, arm, ribs, and in fact, all the bones, were small, the full set of teeth showing, at the same time, that they must have belonged to an adult. The thigh bones were a little larger than a man's fore-finger, the other bones being in proportionate size.

Professor Henry's team of researchers also made another interesting discovery; that the bones were placed in graves lined with sandstone rock, which is not indigenous to the valley where the graves were discovered. The nearest sandstone deposits were located on the tops of mountains, perhaps indicating that the pygmy tribe lived not in the valleys of Sparta, but in the mountains to the east of the valley. The team estimated the bones to be between 300-400 years old.

Unfortunately, the trail of the ancient Hindu pygmies of Tennessee seems to end in the late 19th century. Haywood died three years after publishing The Natural and Aboriginal History of Tennessee, while Professor Henry died less than two years after his team's Sparta excavation. With no one left to carry on the research, the departed race of dwarves faded from memory.