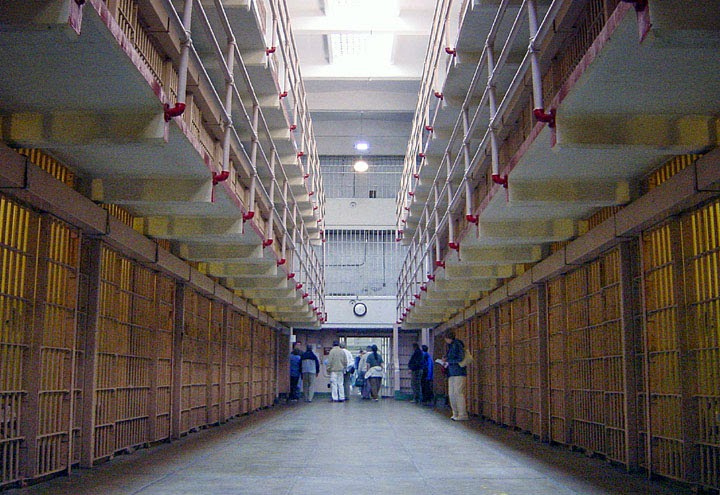 Established as a federal maximum-security prison in 1933 after eight decades of use by the U.S. Army, Alcatraz is perhaps the most famous prison in the world, and certainly one of the most storied prisons in America.  A popular San Francisco area attraction, the former prison and the island upon which it sits has been under the control of the National Park Service since 1973.

According to the National Park Service, more than one million visitors from around the world flock to Alcatraz Island each year.  While tourists continue to visit Alcatraz in large numbers, many of these tourists are unaware of the five following Alcatraz facts.

1. Contrary to popular belief, San Francisco Bay is not swarming with man-eating sharks.

Since nobody has been known to ever successfully escape from Alcatraz, many theories about the island have been perpetuated throughout the decades.  One popular belief is that San Francisco Bay contains man-eating sharks, which have made escapes from the island all but impossible.  While sharks have been known to inhabit San Francisco Bay, these sharks are small, harmless bottom-feeding sharks.

2. The "Birdman of Alcatraz" never kept any birds at Alcatraz.
The prison's most famous inmate, Robert Stroud, earned his fame after he was portrayed by Burt Lancaster in a popular movie.  While the movie depicts Stroud as a loveable curmudgeon who raised birds inside the prison walls, this could not be farther from the truth.  While Stroud did publish two books about canaries while being held at Leavenworth, he never kept birds on Alcatraz Island.  Stroud was also a far cry from the amiable oldster portrayed by Lancaster.  Originally convicted of manslaughter, Stroud viciously attacked a fellow inmate while locked up in a Washington state prison.  He was then transferred to Leavenworth, where he brutally murdered a guard.  This action resulted in his transfer to Alcatraz.

3. No inmate was ever executed at Alcatraz.

Tourists asking to see the prison's electric chair or gas chamber will be sorely disappointed, since Alcatraz never possessed any capital punishment devices.  Although seven inmates were shot and killed during escape attempts, none were ever put to death.  This task was left to state prisons, most notably Folsom State Prison near Sacramento and San Quentin, located across the bay from Alcatraz.

4. Few inmates spent more than five years in Alcatraz.
Most Alcatraz inmates were transferred from other prisons.  These prisoners were escape risks or those deemed "anti-social" by today's standards.  Essentially, they were sent to Alcatraz to be "taught a lesson".  At Alcatraz, they were subject to greater levels of supervision and lower levels of freedom and privileges.  After a few years on "The Rock", these inmates were usually sent back to another federal facility for the remainder of their sentence.

5. Contrary to popular belief, the prison wasn't closed because of the escape attempt made famous in the Clint Eastwood movie, "Escape From Alcatraz".
While the prison's reputation suffered as a result of the near-successful escape attempt of Frank Morris and John and Clarence Anglin in 1962, the closure of Alcatraz had been planned several years prior.  The main reason stemmed from the prison's inaccessibility.  It was simply too expensive to ship food, water, medicine, and other supplies to the island.  According to the Federal Bureau of Prisons, Alcatraz was three times more expensive to operate than the average federal prison.  This, coupled with a $5 million repair bill, led to the prison's closure in 1963.

While these five facts may detract from the lure and appeal of Alcatraz, the island is still worth visiting.  Today, it is one of the most popular sites maintained by the National Park Service, and the island remains a draw for crime buffs, amateur historians, and birdwatchers, who can enjoy viewing over 100 species of birds which visit Alcatraz Island.
Alcatraz