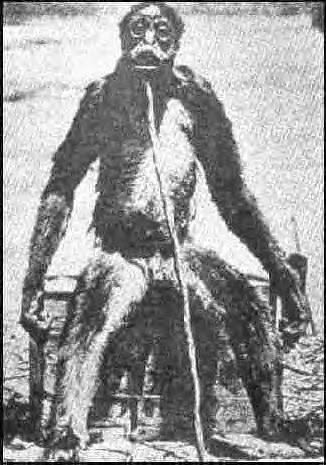 Tracking down the first recorded sighting of Bigfoot in the United States is nearly as difficult as tracking down the mythical hairy creature itself. While most sources seem to agree that the first credible evidence of Bigfoot in North America was discovered in 1811 near the town of Jasper, Alberta, Canada, nearly every serious Bigfoot researcher has his or her own opinion as to when and where America's first documented Bigfoot sighting took place.

Even Wikipedia isn't 100% clear on this matter; according to Wikipedia, Bigfoot stories in America date back to 1840, when a missionary named Elkanah Walker recorded stories of giants among the Native Americans living in Washington state.  In 1847, Paul Kane recorded similar stories about "skoocooms"- supernatural cannibalistic wildmen living on Mount St. Helens.

Of course, since Walker and Kane only recorded oral legends, these cannot be cited as actual Bigfoot sightings. In fact, even the well-known 1811 event in Jasper, Alberta cannot truly be called a legitimate Bigfoot sighting: A trader named David Thompson merely found some strange four-toed footprints in the snow, measuring fourteen inches in length and eight inches in width. Thompson, however, did not actually see the creature which left the prints.

Other early well-publicized Bigfoot sightings (such as the 1884 "capture" of Sasquatch in British Columbia) later turned out to be hoaxes. According to some researchers, the first documented and credible Bigfoot sighting in North America didn't occur until 1924, when Canadian lumberjack Albert Ostman claimed to have been captured and held captive by a family of Bigfoots near British Columbia's Toba Inlet. Although hundreds of Bigfoot sightings took place prior to 1924, Ostman had the foresight to sign an official declaration indicating that his story was true under oath and by virtue of the Canadian Evidence Act, thereby cementing his legacy.

However, whether Ostman's claim was fact or fiction, it does not answer the million dollar question: When and where did the first credible Bigfoot sighting take place?

Journal of the Bizarre has spent more than a year scouring through over a century's worth of archival reports and historical newspapers in an attempt to answer this much disputed question and, we believe, the first Bigfoot sighting in the United States  that is both credible and well-documented took place in 1881. Surprisingly, this little-known event occurred not in the Pacific Northwest, but in New Jersey.

Before we get into the particulars of the 1881 Bigfoot sighting, we must lay out the criteria used by Journal of the Bizarre in order to determine when and where the first credible Bigfoot sighting took place:

1. The report must have been made by the person or persons who saw the creature; all second-hand or third-hand witnesses are disqualified.

2. The report must contain a visual sighting of the actual creature itself; therefore, all reports of tracks, footprints, sounds, droppings, half-eaten carcasses, and the like have been disqualified.

3. The report must have been recorded in print by a reputable publisher and published in a timely manner after the initial sighting. (In the Ostman case, for instance, Albert Ostman didn't come forward with his story until 1957, thirty-three years after the incident occurred)

Based on the aforementioned criteria, Journal of the Bizarre credits the first American sighting of Bigfoot to two men whose names are recorded only as Armstrong and Sullivan. These two men worked as farmhands on the property belonging to W.D. Green, outside of Newton, in Sussex County, New Jersey. According to newspaper reports, these men encountered a humanoid creature covered in long hair. This creature was seen by several other witnesses during the summer of 1881.

Here is one newspaper account of the strange creature, which appeared in the July 26, 1881 edition of the New Bloomfield (PA) Times:

On the farm of W.D. Green, on the road leading from the village of Florida to Glenmore Lake, not far from Newton, N.J., is a cave inhabited by a nondescript animal, somewhat partaking the human form. Some time ago this animal was seen by two men named Armstrong and Sullivan, who were at work in a field near the cave. It so much resembled a human being that Armstrong, who was eating his lunch, asked it to take a piece of bread, whereupon it gritted its teeth and fled to the cave, remaining in sight only a few seconds. Several persons have endeavored to entrap it, but without success. All who have seen it describe it as being covered with long, shaggy hair.

A few days ago Ira Seybolt, a well-known hunter, chanced to pass the cave and saw the animal lying at length upon a stone wall and shot at it, when, with a cry of mingled rage and pain, it leaped from the wall and fled into the cave. Mr. Green, on whose farm the cave is located, now has a quantity of hair, about eight inches long, which was cut from the body of the creature by Seybolt's shot. The creature walks half upright and prowls considerably at night, making unearthly noises.

While the Garden State may not be synonymous with Sasquatch, New Jersey is credited with 50 Bigfoot sightings on the BFRO database. Not surprisingly, Sussex County- where the 1881 sighting took place- appears to have the most Bigfoot activity. According to local legend, a shaggy humanoid creature which they call "Big Red Eye" has been spotted in Sussex County more than 50 times since the early 1900s.