Remembering the strange life (and death) of Mag the Hag 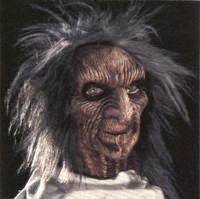 In the late 19th century, three hunters from the western part of Sullivan County, New York, made a gruesome discovery which brought to a close the tragic saga of Margaret Conkling, known throughout the Mongaup Valley as "Old Mag the Hag".

Mag was a member of a large clan of "half-savages" who dwelt in caves and primitive cabins in the wooded hills of Sullivan County. This colorful clan of inbred wild folk was comprised of three hundred and fifty, who went by the last names of Conkling, Hinks, Henion, and De Groates. According to contemporary newspaper articles of the time, the Conkling clan earned a living by stealing, swindling, and poaching. Some of the more civilized members of the clan earned money by weaving willow baskets, which they sold to farmers and locals. However, the money earned from selling baskets invariably went toward the purchase of whiskey.

They also planned robberies and depredations of all kinds, and every basket-selling tour is sure to be followed by a raid upon barns, chicken-coops and cellars. The people are familiar with every inch of ground in the Delaware Valley and they can easily hide themselves in the mountains and manage to escape the officers of the law.

They inter-marry exclusively and no divorce is necessary to separate man and wife if either party desires such a separation. The results of this defiance of the laws of physiology are evident in the forms of their children. Many of them are idiots, some are born without ears, some without limbs.

David Boyle, a hunter from Monticello, recalled encountering the Conkling clan during a fishing expedition, and stared in horrified amazement as the family ate raw fish and raw skunk with evident relish. He described the mother as a monstrosity of a woman six feet and seven inches in height, with a remarkable mustache and beard. Her father, stated Boyle, was three feet eight inches high, hare-lipped, and a hunchback dwarf.

Margaret, or "Old Mag the Hag" was regarded as sort of the queen of this clan, owing to the fact that she was the seventh daughter of a seventh daughter and thus believed to have magical powers. Mag stood at an impressive six feet and nine inches in height, with long black hair and a beard described as being in excess of three inches in length. She lived alone in a hut on the shore of Big Pond, one of the great cranberry marshes of Sullivan County. In this hut she prospered, telling fortunes and performing healing rituals for vacationers from New York and Philadelphia. It is said that she would have become quite wealthy in this manner, if she hadn't spent all her earnings on liquor.

Old Mag the Hag was last seen several months earlier, drunk as a skunk, and a few weeks after her disappearance one of the Hinkses remarked in the county post office, "Mag hain't t'hum no more, an' I shudn't wonder ef she was dead." One of the bystanders, overhearing the remark, trekked to Mag's hut and found it deserted. On one corner of the floor lay half a bushel of walnuts and chestnuts, in the other corner hung the dead and decayed body of a fox. The Conklings, Hinkses, Henions and De Groatses formed a search party, but they could not locate hide nor hair of Mag the Hag.

It was a few weeks later when the three hunters, while chasing a bear through the swamp, found the body. One of them had slipped on what he believed to be a smooth stone. He looked down and saw that it was a human skull, still covered with patches of coarse, black hair. One of the hunting dogs located the rest of her remains, under a chestnut tree on a hillside.

Based on the observations of the hunters, it was surmised that Mag had climbed the tree to shake down some chestnuts when the limb she was perched on snapped, causing her to fall thirty feet to the ground. A large jagged stump caught her body as she fell; her body was completely impaled on the large splinter of wood. A bear or some other carnivorous creature had gnawed off her hands and feet, and it was believed that this was the same animal which had severed her head from her body and carried it into the swamp.

Among the De Groatses, Hinkses and Henions the news soon spread, and they gathered in full force to attend Mag's funeral and dispose of the body, which had been conveyed to the cabin. It was on a Saturday afternoon that at least two hundred of these half-savage men and women assembled at old Mag's cabin and held a wake over the mangled body. They indulged in drunkenness and wild orgies for two whole days and finally, on the Monday following, at midnight, they departed, after having set fire to and totally destroyed the cabin. What became of the old woman's body is more than any one can tell, for it is one of the customs of the Conklin tribe to leave no trace of the grave of one of their members. - Philadelphia Times, June 23, 1882