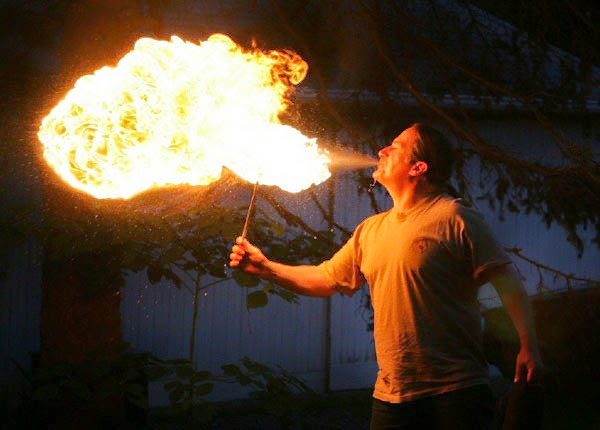 Most of us are familiar with those colorful circus performers who spit fire as part of an act, but not many people are aware that human breath can ignite under the right circumstances. One such event took place in 1886 and was described by Dr. George Beatson and was published in the esteemed British Medical Journal.

Beatson, a pioneer in the field of oncology, described one patient with an extremely bad case of halitosis, whose breath was so foul that it was flammable:

I can not do better than give the facts in the words of the patient himself, who communicated them to me by letter. He writes as follows: "A rather strange thing happened to myself about a week ago. For a month or so I was troubled very much with foul eructations. I had no pain, but the smell of the gas which came from my stomach was disagreeable to myself and to all who happened to be in the room. About a week ago, as I said, I got up in the morning and lighted a match to see the time, and when I put the match near my mouth to blow it out my breath caught fire and gave a loud crack like the report of a pistol. (1)

Beatson reasoned that the gas buildup was the result of imperfectly digested food. During the process of digestion, he wrote, the atoms of carbon and hydrogen in the food became arranged in such a way as to produce carbureted hydrogen- an explosive gas.


Around the same time, a German gastroenterologist named Carl Anton Ewald wrote a book on indigestion and explored various cases of explosive breath, and was able to analyze the flammable gases produced by the human digestive system. In Ewald's book, the analysis of gas in one such case was 20.75% carbonic acid, 20.75% hydrogen, 10.75% carburetted hydrogen, 6.72% oxygen, 41.38% nitrogen, and trace amounts of sulphureted hydrogen.

In 1878, an interesting case of explosive breath was documented in Kentucky. According to the Louisville Courier-Journal:

A Kentucky audience was dreadfully shocked last Saturday night. Just as a local temperance leader was about to begin his address, he leaned too closely over the candle and his breath caught fire. He afterward explained, however, that he had been using camphor for the toothache. The amendment was accepted and the talk went on.


Reports of breath catching fire appeared on a regular basis in newspapers throughout the mid to late 19th century, with many papers blaming the combustible breath on alcohol consumption. As this was the golden age of the temperance movement in America and many newspaper editors fancied themselves purveyors of common decency and pillars of the community, it was not uncommon for papers to sensationalize these stories. Take the following, for example, which appeared in the January 22, 1891 edition of the Washington, DC Critic:

Medical literature of this country, as well as that of England, France and Germany, related many instances of the spontaneous combustion of the human body, the victim always being a person addicted to the use of spirituous liquors either as a beverage or in the form of a bath. About a year ago we gave an account of a drunkard on the Pacific coast whose breath caught fire while he was attempting to light a cigar at the gas jet, the flames utterly burning the interior of the chest to a crisp, of course resulting in the death of the unlucky individual.


The problem with this type of yellow journalism, however, was that it was grossly inaccurate; medical journals of the era did examine numerous cases of spontaneous combustion, but nearly all concluded that it was nearly impossible for a body to spontaneously combust because of alcohol consumption. Undoubtedly, this type of sensationalistic journalism inspired by our national anti-liquor fervor led to the research of physicians like Carl Anton Ewald and George Beatson, who concluded that explosive breath was not a matter of drinking, but of eating.