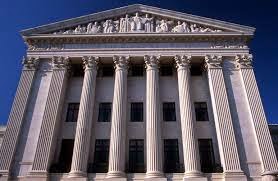 In spite of three botched executions this year involving experimental drugs, the Supreme Court has remained mum on the issue- specifically, on the issue of where these drugs are manufactured and which companies are supplying them to the states where execution by lethal injection is legal.

Even after Arizona inmate Joseph Wood took two hours to die, snorting and gasping like a tortured trout, the court rejected Wood's claim that he was entitled to information about Arizona's execution procedures and, more importantly, the source of the deadly "experimental"  drugs used in the procedure.

It seems, at least from our perspective, that a sickening conspiracy is taking place within our judicial system.

Now, this isn't a matter of whether the death penalty should be abolished, it is simply a matter of transparency. You can still be in favor of the death penalty while opposing the lethal injection methods used in the United States. Yet, sadly, this discussion is sidelined by ignorant voices that say, "What do I care if it took Joseph Wood two hours to die? He was a cold-blooded killer who deserved to die."

That's not the argument at hand, folks.

Firing squads, the gallows, and guillotines are one thing, but strapping a human being (guilty as he may be) to a table and pumping him full of experimental drugs is a horse of a different color. Man, even when condemned to death, is not to be treated like laboratory mice. And society, whether it supports or opposes the death penalty, is entitled to know the truth about these drugs.

So why the need for so much secrecy? What is it that the Supreme Court doesn't want the American public to know?

While the majority of Americans support capital punishment (60%, according to the latest Gallup poll), this means that a significant portion of American citizens do not- somewhere in the vicinity of 125 million Americans. Since we are not permitted to know the identities of the pharmaceutical companies involved in manufacturing or supplying the lethal injection drugs, or the identities of the compounding pharmacies which prepare these concoctions, it only stands to reason that there is a far-reaching conspiracy designed to protect the profits and reputations of these drug companies.

Think about it. If a multi-billion dollar corporation like Pfizer or AstraZeneca was revealed to be the source of the drugs used in botched executions, 125 million potential customers might be tempted to take their business elsewhere. That's a big chunk of profits walking out the door. If such is the case, it suggests that Big Pharmaceutical has the entire criminal justice system- and the Supreme Court- in its back pocket. You should be concerned. Very concerned.

When the American system of justice brings to mind the sick experiments of Josef Megele at Auschwitz, it's time to wake up and ask yourself, "Hey, just what the **** is going on here?" And when multi-billion dollar corporations have the ability to buy the Supreme Court, well, it just might be too late to wake up.