The girl who was eaten alive... by shellfish! 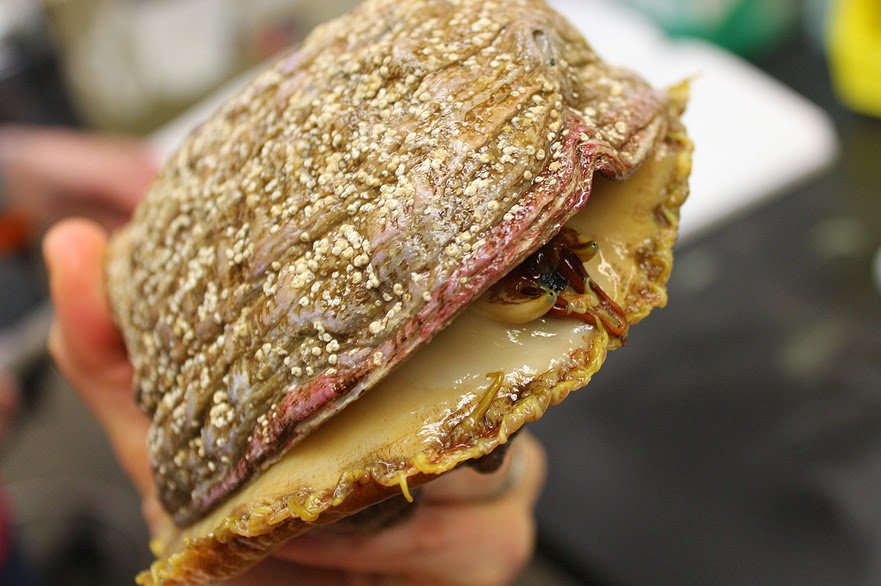 The sea is brimming with bloodthirsty creatures with razor-sharp teeth and monstrous tentacles, and while man-eating sharks and gigantic squid may get all the attention, the world's oceans are also home to another man-eating creature: shellfish!

While killer clams and ornery oysters may sound like creations from a mad sea captain's warped imagination, history records at least one occasion when a human being was consumed by shellfish; in this case, a giant abalone. This true terrifying tale of the sea took place in 1861, off the coast of San Francisco.
Before we get to the particulars of the story, however, let's jump forward in time twenty-six years, to the fall of 1887. A few miles south of the famous Golden Gate strait, upon the sandy beach of Half Moon Bay, a large abalone shell was found. The curious shell was opened and there, captured in mother-of-pearl, was a perfect impression of a child's shoe. Locals immediately turned their thoughts toward an incident that took place nearly three decades earlier.

During the summer of 1861, the coastal town of Half Moon Bay was in a frenzy when a young girl- no more than a toddler- had wandered from her home and disappeared. Fearing that it may have been a kidnapping, the authorities were notified and a massive search party was formed. They searched high and low for the missing toddler, but to no avail. However, just when they were about to abandon their efforts after four days of fruitless searching, the lifeless body of the missing girl was cast up by the waves onto an adjacent reef. It was surmised that the child had fallen off a rock. One of the girl's feet were missing, presumably gnawed off by a hungry shark or some other flesh-eating monster of the deep. Years passed by and the event faded from memory.

That is, until the fall of 1887, when a young man was walking along the beach near Half Moon Bay. The man's gaze fell upon an enormous abalone shell which had been thrown up by the tide. He was astonished to find inside the shell a perfect likeness of a child's shoe, perfect right down to the break in the toe where the leather had worn away. Every detail was captured in brilliant colors of the jewel-like mother-of-pearl. The astonished young man took the shell home as a curiosity.

The man showed the shell to his mother, who reacted with even greater astonishment. No sooner did the old woman see the shell than she exclaimed, "It is my baby's shoe! The shoe of my little girl that was lost twenty-six years ago!" The rest of the family ridiculed the idea, but the old woman went into her bedroom and returned with the mate to the missing shoe, which matched the impression inside the abalone shell right down to the most minute detail. At last, the mystery of the young girl's death was solved.

This incredible story, which was published in the October 20, 1887 edition of the San Francisco Globe-Democrat, continues by theorizing that the foot of the unfortunate girl must have stepped onto the edge of an open abalone shell. The creature closed the shell on the girl's ankle, holding the young child hostage as the rising tide swept over her doomed body.