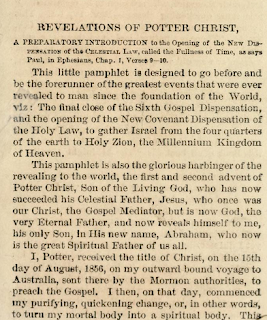 The face of history is pockmarked by those who believe themselves to be prophets and Messiahs. Like pockmarks, some leave lasting scars while others fade and disappear with time. Arnold Potter, a self-declared Mormon Messiah of the late 19th century, is one such example of a prophet who had faded into obscurity.

Born in Herkimer County, New York, in 1804, Potter moved with his wife and children to Indiana where, four years later, the family was baptized into the Mormon faith by missionaries of the Church of Jesus Christ of Latter Day Saints. Five moths later, in April of 1840, Potter was ordained an elder of the faith by Mormon founder Joseph Smith. Potter and his family then settled in Sand Prairie, Iowa, where Potter was the presiding elder of the church.

In the following years, Potter traveled to Utah as a Mormon pioneer. By 1856, he had moved from Utah Territory to California. Later that year, Brigham Young called upon to serve as a missionary in Australia, leaving California for Australia on a ship named Osprey. Potter claimed that during his voyage, he experienced a supernatural event, whereby Christ entered into his body, and thus he became "Potter Christ, Son of the living God". While in Australia, Potter wrote a book which he claimed was dictated to him by angels (much like the Book of Mormon). Potter described his work as the book from which all people were to be judged at the Final Judgment.

Potter returned to California in 1857 where he soon gathered followers. This group then departed for Missouri, which was considered by Mormons as Zion. After a flood decimated Potter's homestead in the village of Saint Marys, he moved his family to Council Bluffs, Iowa. There he spent his days preaching on the streets in a long white robe. Even though his followers were few, they were devout, however, and "Potter Christ" led his group in weekly prayer meetings.

In 1872, during one of these meetings, Arnold Potter declared that the time had come for his ascension into Heaven. Followed by his disciples, Potter rode a donkey to the edge of a cliff. After a short speech he leapt from the edge, believing that he would ascend into Heaven. Instead, he fell to his death. His body was collected, cremated, and buried by his followers.