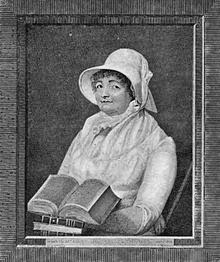 In the annals of human history there have been hundreds of self-proclaimed prophets, prophetesses and Messiahs. Most are dismissed by the public and soon forgotten. However, others are remembered for centuries; some for leaving an enduring legacy, and others for their sheer delusional insanity. Joanna Southcott, a self-described religious prophetess from England who lived during the 18th century, is a shining example not only of the latter, but of human gullibility in general.

Raised in the village of Gittisham in Devon, England, Joanna was the daughter of a farmer and was brought up in the Church if England. However, in 1792, at the age of forty-two, Joanna become convinced that she possessed supernatural powers. She began writing down prophecies, before convincing herself that she was the woman spoken of in Revelation 12:1–6, who gives birth to a son who would become the ruler of all nations.

Southcott began writing letters to the English clergy, condemning them for their indifference to the needs of the poor. As a champion of the poor, her local fame grew when her predictions regarding the crop failures and famines of 1799 and 1800 were fulfilled. In 1801, emboldened with self-righteous confidence, Southcott used up her life savings to print 1000 copies of the first part of her book, "The Strange Effects of Faith; with Remarkable Prophecies (Made in 1792)". Of course, anyone could print a book claiming that predictions made a decade earlier had come to pass, but, nonetheless, her book attracted the attention of Richard Brothers- another self-described prophet who was, at the time, at the peak of his popularity.

The following year, Brothers, along with master engraver William Sharp, convinced Joanna to move to London, where they provided her with lodgings and promoted her work. In London, Joanna attracted several followers, who began to refer to themselves as Southcottians. Between 1801 and 1814, Southcott published sixty-five pamphlets, and by one conservative estimate, a total of 108,000 copies of her works- which combined apocalyptic visions with homespun wit and wisdom- were published and circulated from 1801 to 1816, making Southcott one of the most popular writers of her time. In fact, Charles Dickens refers to Mrs. Southcott at the beginning of "A Tale of Two Cities".

Amid vicious public attacks on her character, Joanna fled from London to Bristol where, in 1814, she announced that she was about to become the mother of Shiloh, the name given to the second incarnation of Christ. This revelation was made explicit in Southcott's "The Third Book of Wonders, Announcing the Coming of Shiloh" (1814), and "Prophecies Announcing the Birth of the Prince of Peace" (1814). At the time of her pregnancy, Joanna was sixty-four years of age and professed to be a virgin. A prominent physician examined her and announced that Joanna was indeed showing signs of pregnancy. The date of October 19, 1814, was fixed for the birth, but once November came and Shiloh had not arrived, she was ridiculed mercilessly by the press. On November 12, Southcott married John Smith, a close friend and former steward to the earl of Darnley, who offered himself in the role adopted father to the new Messiah. The marriage was to be annulled if Shiloh failed to appear; however, Southcott died December 27, at 38 Manchester Street in London. Her followers retained her body for four days, in the hope that she would be raised from the dead. They agreed to its burial only after it began to decay.

By this time the Southcottian movement had over 100,000 followers, although most of them soon lost interest and abandoned the movement. The Panacea Society, founded by Southcott follower Mabel Barltrop in 1919, was formed in order to protect and preserve a sealed wooden box of Southcott's prophecies, known as Joanna Southcott's Box, with the instruction that it be opened only at a time of national crisis, and then only in the presence of all 24 bishops of the Church of England.

Barltrop adopted the name "Octavia" and believed herself to be the Shiloh of Southcott's prophecies. By the 1930s, the Southcottian movement numbered less than one hundred; the last member of the Panacea Society, Ruth Klein, died in 2012.

In 1927, psychic researcher Harry Price claimed that he had come into possession of Joanna Southcott's Box and arranged to have it opened in the presence of the Bishop of Grantham. The opened box was found to contain only a few odds and ends, among them a lottery ticket and a horse-pistol.