The Ferguson Conspiracy: How the Dept. of Homeland Security Masterminded the Riots 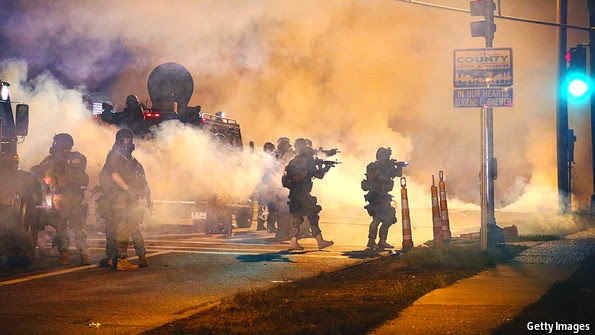 Millions of people around the world have been watching the Ferguson saga unfold in all of its heartbreaking glory, and many of us whose eyes have been glued to the #Ferguson feed on Twitter have seen the same opinion expressed by pundits on both sides of the controversy:

If the grand jury made its decision at 1:00 pm, why didn't the announcement of Officer Darren Wilson's fate come until nightfall? 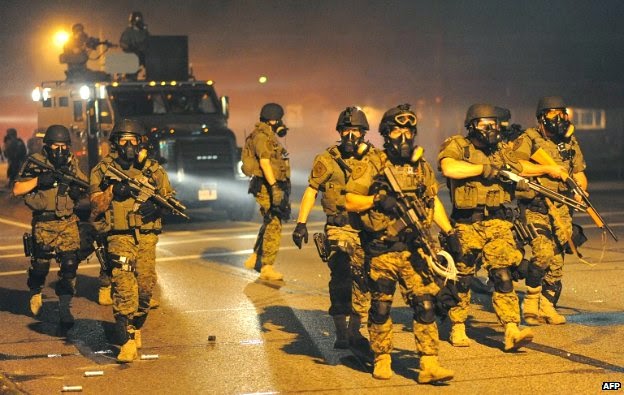 It's no secret that, for several days leading to the grand jury's decision, the powers-that-be in St. Louis County were preparing for riots, looting and violence. Yet, in light of recent developments, it almost seems like the powers-that-be were hoping for riots, looting, and violence by waiting until nightfall to announce that Wilson would not be indicted on any criminal charges. After all, streaming flares and tear gas canisters and burning police cruisers appear so much more dramatic against the backdrop of darkness than they would during early afternoon.

Indeed, the Ferguson debacle seems perfectly scripted and choreographed- custom designed for November sweeps and tailor made for prime time television. And if it seems that way, well, it's because that's the way it really is. And there's no shortage of bare bones evidence to prove that the Department of Homeland Security "staged" Ferguson in order to make the American public sympathetic to a militarized Police State-- while making the American public believe that anyone who takes to the street to protest is a dirty, no-good, garden-variety thug. Why? Because when America sees Ferguson burning, America will be begging for Big Brother to keep them safe.

Long before Michael Brown even thought about lifting cigarillos from a Ferguson store the drama was being staged by the DHS, not just in the St. Louis area, but in black communities all over the country. A Dept. of Homeland Security program known as the Urban Areas Security Initiative (UASI) focuses on the “unique planning, organization, equipment training and exercise needs of high-threat, high-density urban areas” vulnerable to civil unrest. According to a 2012 report by Oklahoma Senator Tom Coburn, the program handed out over $7.1 billion since 2003. The bulk of this money was used to purchase tear gas, Bearcat armored vehicles, sound cannons, and other tactical gear.


The bulk of this money also went to cities with a long-standing track record of friction between predominantly black citizens and predominantly white police departments. And when it comes to DHS money, Ferguson got more than its fair share.

An August 2014 article published by The Guardian revealed that the DHS pumped approximately $7 million into the St. Louis area this year alone, and a whopping $81 million in the last nine years:

One thing seems certain: If Uncle Sam buys the bullies in blue nearly $90 million worth of shiny new toys, the boys in blue will be itching to play with them. They just had to wait for the right time... and stoke the embers of anger in the process. And that is why the announcement to not indict Darren Wilson wasn't made until nightfall, that is why you didn't see any fire trucks racing to put out the fires, and that is why Governor Nixon kept the National Guard at arm's length until after the city of Ferguson devoured itself like a self-cannibalizing organism.

Speaking of fire trucks, it wasn't like there was shortage of them in Ferguson; In March 2011, FEMA awarded the Ferguson Fire Department $34,920 to purchase new equipment. In fact, since 2001, St. Louis area fire departments received several millions of dollars in FEMA Assistance to Firefighters Grants (AFG). Why it was decided to let the city burn on the night of November 24 is one of the many unanswered questions surrounding Ferguson. Many reporters have said it was because of gunshots in the vicinity, but who really buys that excuse? After all, firefighters spend their lives running headfirst into infernos. It's a dangerous job. That's what they do.

Interestingly, while the vast majority of white Americans side with the grand jury's decision, the rest of the world is watching the state of police abuse in America and asking "The fuck is going on over there?" Egypt's foreign minister has condemned Missouri's police response. As has China. Iran's deputy foreign minister Majid Takht-Ravanchi called the unrest a sign of "the phenomenon of racism" in the West. Hell, even North Korea has chimed in on police tactics in Ferguson! Now, how fucked up is that? When North Korea insists that America is becoming a police state, well it's time to limit your intake of FOX News, sit up, and take notice. Something is seriously wrong here.

Perhaps the scariest part of the entire story is that the Missouri Department of Homeland Security has decided to "Plead the Fifth" like a mobster on a witness stand when questioned about the need to pump millions of dollars worth of chemical weapons into black communities. When journalist Spencer Ackerman of The Guardian tried to get to the bottom of this mystery in August, this was the result:

The listed phone number for Missouri’s administrator of homeland-security grants was out of service, and neither the administrator nor his deputy returned email and phone messages.