Did the ancient Egyptians have airplanes? JOTB says no.


You can't watch a television show about "ancient aliens" or read an article about ooparts (an acronym for "out of place artifacts") without someone pointing to the famous wooden carving found in an Egyptian tomb. Ever since its discovery in 1898, this artifact, believed to have been made in the 3rd century BC, has been the topic of much conversation. Sometime around 1969, however, this artifact became even more famous when an Egyptologist named Khalil Messiha theorized that the wooden carving from a tomb in Sakkara depicted not a bird, but an airplane.

A recent article in the Epoch Times explores this theory, but fails to present both sides of the plane vs. bird argument. The article's author, Tara MacIsaac, includes a quote from John H. Lienhard, a mechanical engineering professor at the University of Houston. When questioned about the Sakkara oopart and its relation to other similar Egyptian artifacts, Lienhard says:

This is the most hole-ridden argument we have ever heard outside of an episode of Ancient Aliens on the History Channel! For starters, of course the wooden artifact is "aerodynamically correct"-- this would be true whether the carving depicted a bird, a plane, a UFO, a space shuttle, or anything else that flies through the air. Why? Because birds, for the most part, are aerodynamically correct! If a bird wasn't "aerodynamically correct", well, you'd have a penguin. And, as far as we know, penguins aren't spotted very often in Egypt.

Secondly, Professor Lienhard's comparison of the Sakkara oopart to other similar artifacts is extremely flawed. For instance, envision the following scenario: The year is 4550 AD and an archaeologist is digging through the 20th century remains of someone's house and stumbles across a collection of model airplanes. This collection may consist of a dozen 20th century fighter jets, drab gray in color, and one bright red WW1-era bi-plane, the plane flown by the Red Baron. Professor Lienhard's reasoning is no different than the archaeologist from 4550 AD who proclaims: "The other models had one row of wings, but this strange red model has two. The other models were all gray, but this strange model was bright red. The other models were pointy in the front, but the strange model had rotating blades attached to the front. Therefore, we must conclude that the red model depicted a terrible giant flying insect about the size of an F-14 that looked like a dragonfly with huge fangs!"

Let's just cut to the chase here, folks. The reason why Sakkara oopart looks more like a bird than an airplane is because (drum roll please)... it is a bird. And anyone with even the slightest ornithological background should be able to tell you exactly what type of bird it is. The "mystery" is really not much of a mystery; it's simply a wooden carving of white-faced storm petrel-- a bird very common to the geographical region where the ancient artifact was discovered.

Look at the side view of the wooden carving and look at the head of the white-faced storm petrel. You can easily see that the carving shows the white face and black "eyemask" which are the most identifiable signs of the storm petrel. The petrel's wings in flight are shaped very much like the wings of the wooden carving. And, sorry to disappoint you, Professor Lienhard, but lots of things in nature have the same shape as the cross section of an airfoil: bird's wings, shark's fins, and even the flippers of dolphins.

But what about the "missing legs" described by Lienhard? This is also a no-brainer. In flight, the storm petrel's legs are tucked in close to its body, making them virtually invisible. The artifact in question clearly depicts flight. Why take the time to carve such a trivial detail into a child's wooden toy? When standing the petrel has long thin legs, which would be impossible to carve (unless, of course, you prefer to believe that ancient Egyptians were buzzing around in jet planes and hovercrafts and surfing the Internet). 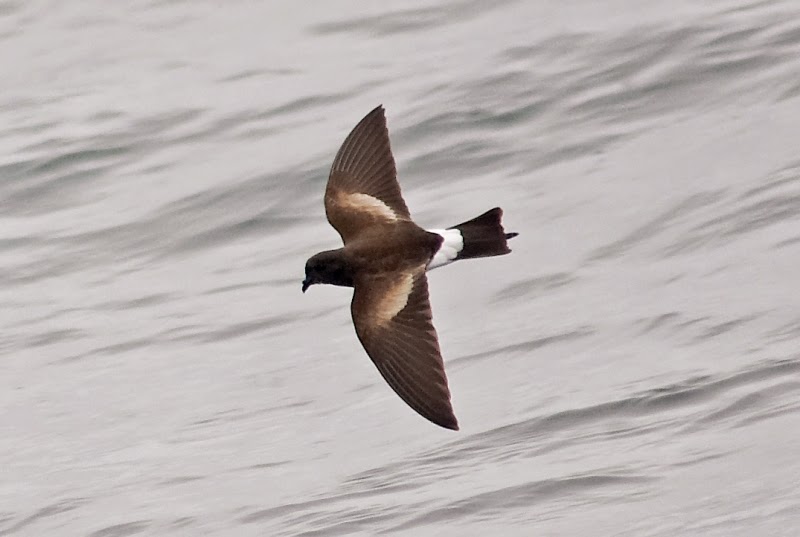 Finally, the geography corroborates our theory that the Sakkara oopart is, in reality, a white-faced petrel. The petrel is a sea bird, and the city of Sakkara sits close to not one, but two seas; the Red Sea, a few miles to the west, and the Mediterranean, a few miles to the north. Yes, I know what you're thinking: "A sea bird? Spotted in an area flanked on two sides by the sea? Preposterous!"