The Bilocation of Mary Renfrew 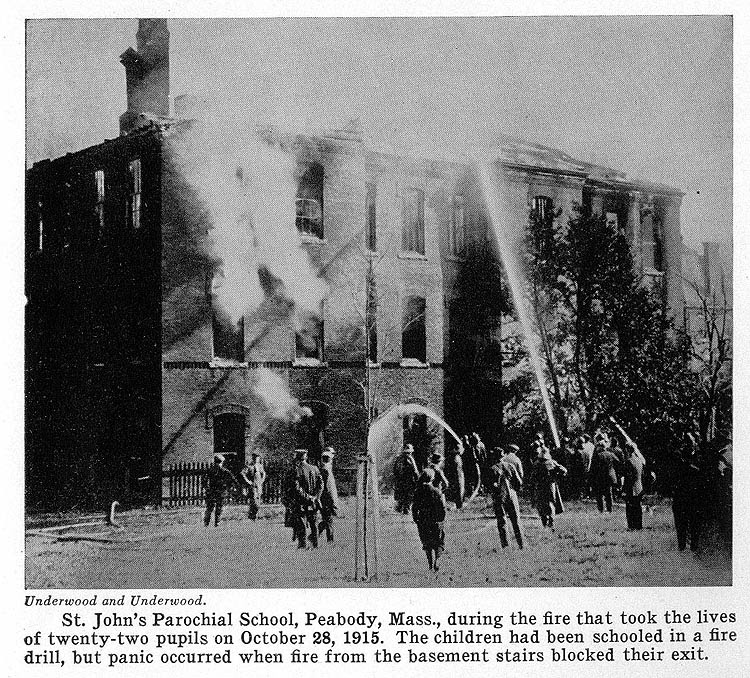 Bilocation is the supposed ability to appear in two places at the same time. Most frequently attributed to Christian saints, the power of bilocation was said to belong to individuals such as St. Anthony of Padua, St. Ambrose of Milan and, more recently, Padre Pio. Yet this strange phenomenon has been documented in virtually every time period, including the 20th century- as our following story indicates. It is the story of Mary Renfrew, a young girl whose very life was spared by this bizarre ability.

The morning of October 28, 1915, started out like any other Thursday in the city of Peabody, Massachusetts. Parents bundled their children in heavy jackets and scarves before sending them off to school. It was a frosty morning, but Mrs. Dorthea Renfrew wasn't worried about Mary; for it was a short walk, perhaps two or three blocks, from their Perkins Street home to St. John's Catholic School on Chestnut Street. Mrs. Renfrew, or "Dottie", as her friends called her, watched young Mary disappear from view before heading off to her job as a clerk in a bakery on Lowell Street.

No sooner had Dottie taken off her coat and took her place behind the glass case displaying loaves of freshly baked bread, she felt a strange compulsion to stand at the front door and press her nose to the window, and she was surprised to see a girl of about twelve running down the sidewalk. She was even more surprised to see that the girl was Mary, without her wool coat or scarf! Dottie was overcome with two emotions, and they were both the same; anger because Mary had played hooky from school, and anger because it was much too cold to be gallivanting around outside wearing just her parochial schoolgirl uniform.

"Mary Rose Renfrew!" shouted the mother from the doorway of the bakery. "You come here right this second!" When no answer came, Dottie ran to the end of the block and looked down Warren Street, then turned and looked down King. It was as if the girl had vanished into thin air. When Dottie returned to the bakery, the owner handed Dottie the telephone. "It's for you," said the old rosy-cheeked owner with her thick German accent. Dottie listened to the voice on the other end of the line for a moment, and then shouted, "It can't be! It just can't be!"

"What's the matter?" asked the owner of the bakery as Dottie returned to the counter, visibly shaken. Dottie explained that the call was from a family friend who lived across town. The gentleman, no stranger to the Renfrews, claimed that he had just seen a young girl running down Tremont Street who looked just like Mary Rose. She was wearing a St. John's school uniform.

This frightened Dottie to the point of exasperation; for she had just seen the girl not more than two minutes earlier. Even the faster sprinter in town couldn't cover a distance of ten city blocks in so short a period of time. She picked up the telephone and begged the operator to put her through to St. John's. Mother Superior Aldegon, who was in charge of the school, supplied Dottie with the most incredible news. "I was just getting ready to call you, Mrs. Renfrew," she said in astonishment. She explained that Mary Rose, just moments after entering the school, was overcome with a sudden illness and fainted just inside the doorway. A policeman, who always stood before the school to see that the children arrived safely, immediately transported Mary to the home of a physician a few blocks away. According to Mother Superior Aldegon, the policeman was currently on his way to the bakery to inform her of the news.

After waiting for what seemed like an eternity, Dottie asked the telephone operator to connect her with the police department. "I'm sorry, ma'am," explained the operator, "but we can't make the connection right now. We've been instructed to keep all of the lines open because of the emergency downtown."

"Haven't you heard?" replied the operator. "There was an explosion at St. John's. The school is on fire. It's horrific, just horrific..." The line suddenly went dead and Dottie looked out the bakery window to see throngs of men and women running down the street in the direction of the school.

As the students began their morning prayers, a gas explosion in the basement of the school started the inferno that would claim the lives of 21 girls ranging in age from seven to seventeen. There were no fire escapes, thus there was no escape from the fire. Blinded by the thick smoke, six hundred children and teachers ran for the front door at once, causing it to jam. It was the same doorway where Mary had fainted not more than thirty minutes before. The fire broke through to the vestibule and within five minutes the entire building was engulfed in flames. When it was all over, Chief Canfield of the Salem Fire Department made an astounding discovery in the rear of the building; a huddled mass of tiny bodies, charred beyond recognition. Other bodies, trampled and broken, littered the hallways.

Mother Superior Aldegon, of the Sisters of Notre Dame, was hailed as a heroine on that fateful day. In spite of the chaos, she managed to save dozens of lives by lowering children out the third story window. Miraculously, none of nuns lost their lives. Mary Rose Renfrew, unconscious after striking her head as she fainted that morning, had been in bed at the home of a prominent local physician the entire time.

There's a bizarre footnote to this strange story, by the way.

The day before the St. John's school fire, the Washington Herald astrologer wrote the following horoscope, which was published twelve hours before the tragedy:

Fires in philanthropic institutions will cause loss of life. One that is most serious will take place in New England.

But perhaps the most bizarre footnote is this: There was no telephone inside St. John's school. A telephone system would not be installed until the construction of a new school was completed a few years later. The call alerting the fire department was placed by an off duty fireman who happened, by sheer coincidence, to be walking past the school right as the explosion happened. Furthermore, Mother Superior Aldegon couldn't have spoken to Mrs. Renfrew because records indicate that, at that time Mrs. Renfrew placed her call, she was engaged in leading the fire drill.
astral projection bilocation Massachusetts