Named after the famed 6th century Irish monastic saint and explorer, Saint Brendan's Isle has been "missing" since 512 A.D. However, Journal of the Bizarre believes that the phantom island has finally been found, thanks to Google Earth satellite images which clearly show a submerged landform located west of the Canary Islands that matches the legendary island's depiction on a map from the early 18th century.

This island is named after Saint Brendan the Navigator (484-577 A.D.) who claimed to have landed on it in, along with 14 monks, in 512. The party reportedly remained on the island for two weeks, unable to be rescued because of a thick mist which obscured the isle. According to an ancient monk named Barino, Saint Brendan's Isle was a heavily-forested, mountainous mass of land inhabited by exotic birds and beautiful flowers.

By the 13th century, however, most scholars doubted the existence of this mysterious island paradise. In Planiferio de Ebstorf (1234), Spanish historian Marcos Martinez referred to the place as "the lost island discovered by St. Brendan but nobody has found it since".

Interest in St. Brendan's island paradise began to grow again during the 1400s, when the King of Portugal was informed that a sailor had seen the lost island of "San Borondon", but couldn't land because of poor weather conditions. The king sent out an expedition, but it never returned. As late as the late 18th century, numerous other expeditions went out in search of Saint Brendan's Island, but none were successful.

Yet many explorers firmly believed in the existence of Saint Brendan's Isle, or San Borondon. Christopher Columbus believed in its existence, as did Portuguese prince Infante Dom Henrique de Avis (better known as Henry the Navigator). It was Henry who organized the ill-fated expedition to the island in the 1400s. 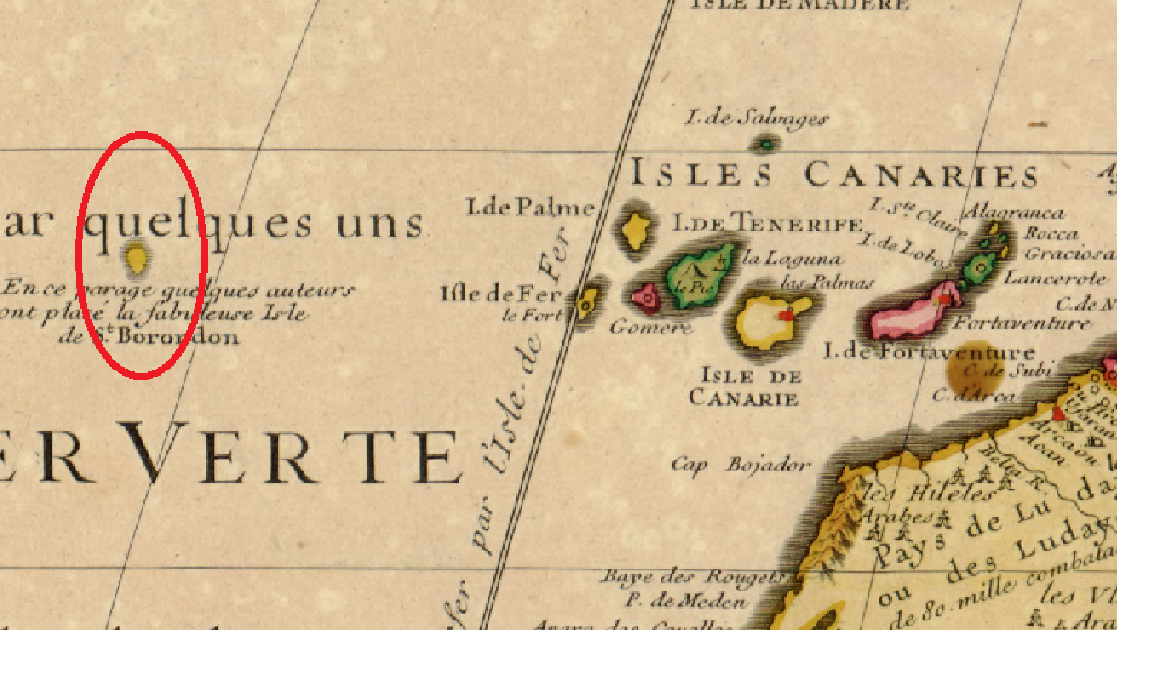 In 1707, French cartographer Guillaume Delisle published a map of Africa which shows the location of Saint Brendan's Isle, situated in the North Atlantic west of the Canary Islands and south of the Azores. Remarkably, a submerged land mass matching the island's shape and location can be seen on Google Earth, at the coordinates of 29.928676, -28.465576.

Although this particular landform, officially known as the Great Meteor Seamount, has been widely studied for years by scientists studying seismology and geology, no one has ever made the connection to Saint Brendan's Isle. This submerged land mass was first discovered between 1925 and 1927 by the German research vessel Meteor. At 4530 meters, this seamount would be the world's 345th highest mountain if it were on land (surpassing the Matterhorn, Mount Whitney, and Mount Ranier).

Judging by the satellite images, the submerged island is part of the Mid-Atlantic Ridge, which, although located underwater, is the world's largest mountain range. As you can see by the Google Earth pictures, Saint Brendan's Island, at one time, may have been the southernmost tip of a much larger "lost continent". Perhaps Atlantis?

So what happened to the island to cause it to "disappear"?

Since the 1950s, it has been a well-established fact that the central valley of the Mid-Atlantic Ridge (not far from Saint Brendan's Isle) is a hotbed of seismic activity and the epicenter of countless earthquakes. In fact, the Canary Islands themselves are a chain of volcanic mountain peaks rising up from the floor of the North Atlantic. The Mid-Atlantic Ridge separates the Eurasian and North American tectonic plates. Due to plate tectonics, the average spreading rate for the ridge is about 2.5 cm per year. During periods of intense seismic activity, it is possible that the spreading rate could have increased dramatically. Since the early explorers had no knowledge of continental drift, it's quite possible that by the time of the 15th century expeditions, the island wasn't located where it was "supposed" to have been located, as nearly 1000 years had passed since Saint Brendan and his monks landed on it.
Atlantis lost civilizations phantom islands Saint Brendan's Isle Strange History unsolved mysteries