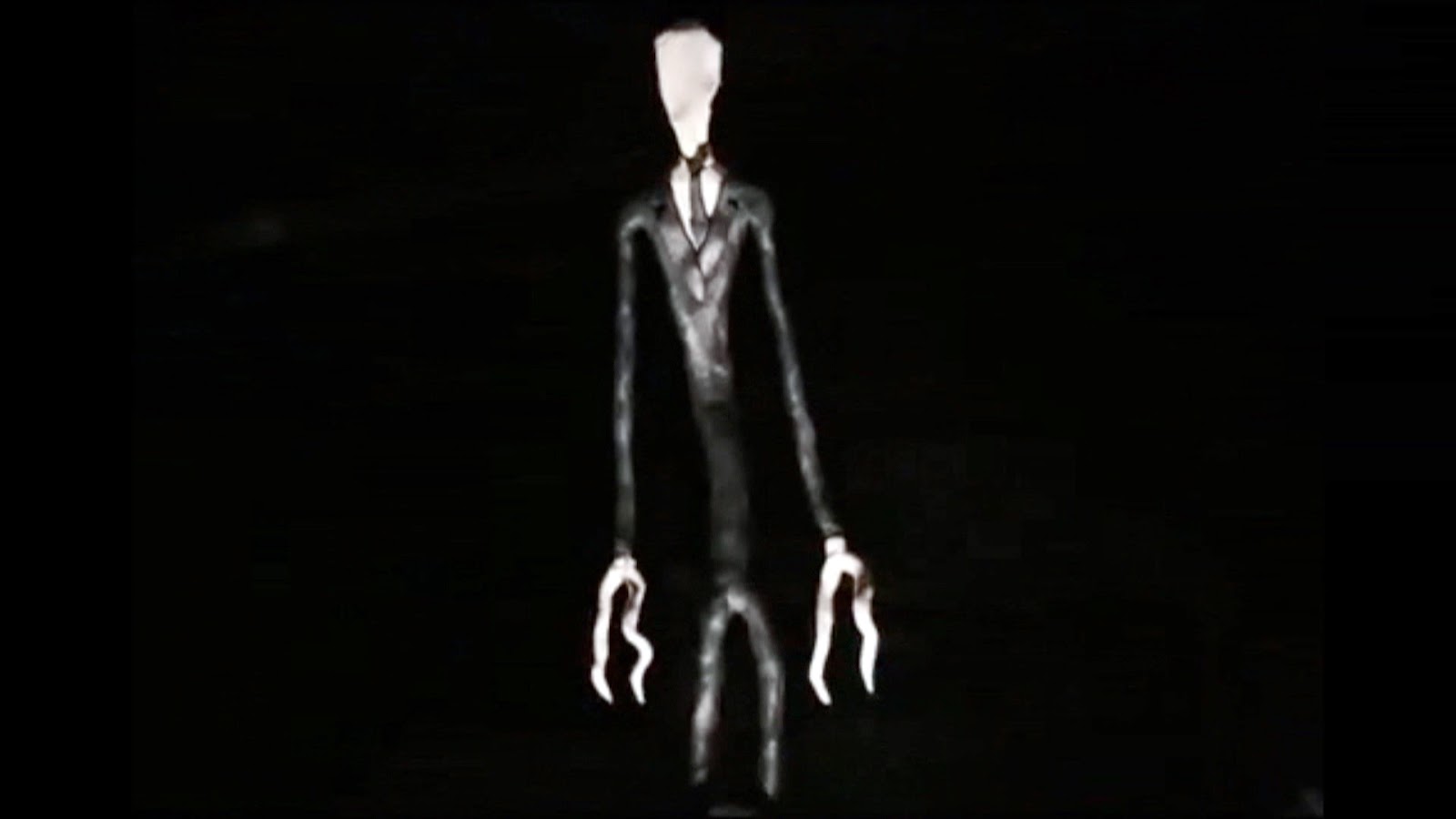 Since 2009, sightings of an apparition known as "Slender Man" have been on the rise throughout the world, with the majority of sightings coming from the UK. Many attribute the existence of this mysterious being to Eric Knudsen, who, in 2009 began sharing photos of this fictitious long-limbed phantom on the web community Something Awful. Despite being acknowledged as a Photoshopped hoax of the paranormal variety, numerous credible witnesses have described seeing an apparition which fits the description of Slender Man-- faceless, abnormally tall and thin, with spindly limbs and often fond of wearing a dark or gray suit.

In recent weeks, Slender Man has popped up in the news, with four recent sightings of this apparition taking place in the West Midlands of England. Nick Redfern, the legendary UFO/paranormal researcher and author of the 2008 book There's Something in the Woods, which features the testimony of a man who spotted a similar spectre in the Cannock Chase region of Staffordshire, has recently published an article on Slender Man in which he supports the theory that this mysterious spook really does exist. Considering that his book came out a year before Eric Knudsen's Photoshopped creations, it would appear that Redfern might be on to something.

We think he just may be on to something, too.

Apparitions of the Slender Man variety have been a fixture of folklore around the world for centuries. In Scotland, for instance, this spook is known as Fear Dubh (The Dark Man), and our very own paranormal detective par excellence (and unofficial Walking Encyclopedia of All Things Weird), Marlin Bressi, has shared with us a few historical newspaper accounts from the early 20th century, which he believes may shed some light on the history of Slender Man in Scotland.

The ghost of an Irish giant, nine feet high, has been vexing the inhabitants of Glanville, a little village near Galway, and the people of Galway city have been trying to lay it. A few nights ago a couple of young men were returning to their home in Galway from a party at Newcastle, at which it is said there were "spirits" of a different kind, when they saw the form of a man about nine feet tall advancing toward them along the railway line. They shouted and the apparition vanished, but reappeared a few minutes later about forty yards down the line, and they last saw it making off in the direction of Lough Corrib.

The young men brought the story into Galway and the next night a strong party, armed with shotguns and revolvers, and otherwise fortified, started for Glanville. They had not been long in waiting when the ghost appeared and one of the party raised a revolver to fire at it. He never fired the shot, however, for the revolver fell from his hand and he fell unconscious in the arms of his companions. The ghost, the others declare, laughed loudly and started for Lough Corrib again. There was no more ghost hunting that night. The young man who tried to shoot it was carried into Galway to a medical man who worked over him for more than an hour before restoring him to consciousness. The man then said that something seemed to paralyze his arm as he was about to fire. Other parties have gone out nightly, but have failed to meet the ghost again.

Fear Dubh was seen by numerous witnesses again one year later, haunting the same vicinity. And, once again, attempts to fire shots at this abnormally-tall spook proved futile. From the January 6, 1909 edition of the Barbour County (Ky.) Index:

Dublin-- A spectral figure, gray in color and about eight feet in height, is said to have haunted the railway line near Galway for nights. The apparition, which is described as "tapering toward the top", walks from the railway viaduct across the bank of the stream and then disappears.

A number of people have visited the place toward midnight, when the apparition is due to appear. One man declares that he saw it jump from the top of the viaduct into the Corrib, where it disappeared. It was not drowned, however, for on the succeeding night it was seen again by a number of students from Queen's college, Galway. One of the students volunteered to go over and talk to it, but when it appeared he changed his mind.

On a Sunday's evening a party of six men, armed with shotguns, revolvers and sticks, sallied forth to "lay the ghost". They had been in ambush but a short time only when the specter loomed up before them. One of the men raised a revolver, but before he could fire he fell in a swoon. The expedition was abandoned and the man was taken into Galway, where he was medically attended. These strange reports have created excitement in the district, and search parties are out nightly for the purpose of unraveling the mystery.

Some paranormal researchers, such as our good friend Lee Brickley, believe that the recent string of Slender Man sightings in the UK have a perfectly natural explanation: Sleep paralysis.

“To get so many sightings at roughly the same time is unusual,” said Brickley, in a recent article published by the Birmingham Mail. “One theory is that this has nothing to do with the supernatural and eye-witnesses are experiencing sleep paralysis, where individuals’ eyes are open but they are still in a state of sleep, and therefore unable to move." Many of these recent reports state that the apparition seemingly pinned victims to their beds, as if sitting on their chests.

Since three of the four latest Slender Man encounters occurred indoors, this may very well be a case of sleep paralysis. However, as Marlin Bressi points out, sleep paralysis fails to explain the Scotland sightings of the tall gray phantom seen in Galway in the early 20th century.

"One thing I find incredibly remarkable is Fear Dubh's ability to paralyze his victims," states Bressi. "Although the recent English sightings sound like sleep paralysis, the dozens of witnesses who encountered Fear Dubh in 1908 and 1909 were outdoors and wide awake." He adds that another interesting coincidence is that most encounters with this type of apparition take place during the winter. "The most recent sightings of Slender Man in the UK also took place in December, while the Galway sightings occurred in December and January, respectively."