They Put the "Art" in Fart: A Brief History of the Flatulent Arts


While toilet humor may seem like a relatively new phenomenon when viewed through the spectrum of human culture, it may be safe to assume that cavemen went around asking fellow Neanderthals to pull their finger. While history fails to document primitive man's opinion on farting, historical records show that mankind's fascination with flatulence dates back to at least the 12th century, when King Henry II hired as his jester a man known as Roland le Petour, or Roland the Farter.

In medieval England, no holiday season would be complete without a performance by Roland, whose contract as a jester obliged him to perform Unum saltum et siffletum et unum bumbulum (one jump, one whistle, and one fart) each Christmas before the king's court. Roland the Farter was paid handsomely for these services; the jester was given Hemingstone Manor in Suffolk and thirty acres of land. While Roland the Farter was not the first person to entertain a crown by passing gas, he was the first to make a full-time career out of it.

Until Roland came along, farting for laughs was a less-than-refined amateur endeavor. In the 4th century A.D., Saint Augustine wrote of Algerian street performers who had "such command of their bowels, that they can break wind continuously at will, so as to produce the effect of singing." By the time of Roland the Farter, this time-honored art form had flourished all over the civilized world. For example, the braigetoír of medieval Ireland entertained crowds by breaking wind. But, unfortunately for the braigetoír, the general consensus among the Irish was that these flatulists ranked pretty low on the entertainment scale, well below bards, pipers and harpists. In other words, they were the medieval Irish equivalent of a Def Leppard tribute band.

Thanks to entertainers like Roland, the reputation of flatulists soon soared like the very wind that was expelled from their intestines. In William Langland's famous allegorical narrative poem "Piers Plowman" (written between 1370 and 1390), the poet describes the qualities that make an entertainer exceptional, with farting on command nearly topping the list. In his poem, Langland laments: "As for me, I can neither drum nor trumpet, nor tell jokes, nor fart amusingly at parties, nor play the harp."

Remarkably, the reverence toward farting performers extended to lands far and wide, even in the most isolated of forbidden kingdoms. During the Edo period, a time in Japan's history marked by strict social order and isolationist foreign policies, these performers were known as heppiri otoko, and held in the same esteem as the geisha and performers of kabuki and bunraku theatre.

While flatulists ostensibly made (foul-smelling) waves from London to Tokyo, it should be no surprise that history's greatest fartiste hailed from the same country that gave the world such cultural icons like Paul Cézanne, Pierre-Auguste Renoir, Coco Chanel and Pepé Le Pew. This man, of course, was Joseph Pujol, better known by his stage name Le Pétomane. 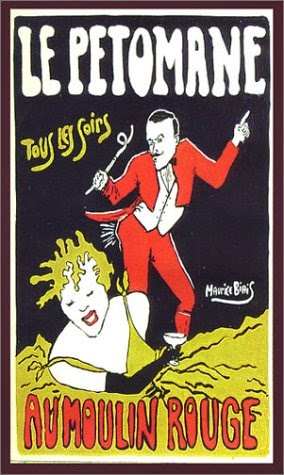 Born in Marseilles in 1857, Pujol was the son of a sculptor who discovered, while still a young boy, that he possessed a most remarkable talent. Little did he know at the time, however, that this unique talent would catapult him to superstardom all over the world. Pujol discovered his talent while swimming in the sea. When he held his breath and put his head under the water, young Joseph felt an icy cold sensation in his bowels. He ran ashore and was startled to see water gushing from his anus, the result of an accidental enema he had given himself by "inhaling" water through his rear end. He was scared shitless (no pun intended).

His debut performance took place in Marseilles in 1887 and was so well received that he decided to move to Paris, adopting the stage name "Le Pétomane"-- a combination of the   French verb péter, "to fart", with the suffix -mane, or "-maniac". Thus, Le Pétomane translates to "the fartomaniac".

By 1892, he was performing at the Moulin Rouge, where his act included such impressive feats as playing "'O Sole Mio" with an ocarina connected to his anus with a rubber tube, replicating the sounds of cannon fire and thunderstorms, and extinguishing a candle from several yards away. Now a celebrity, Le Pétomane's fans included the likes of the Prince of Wales, King Leopold II of Belgium, and Sigmund Freud. After a contract dispute with Moulin Rouge management, Pujol decided to create his own traveling show, which he named Theatre Pompadour. Joseph Pujol retired as a performer during World War I and resumed his career as a baker. He later opened a biscuit factory in Toulon, which he ran until his death in 1945 at the age of eighty-eight.

There are many flatulence artists still performing today, but none of them can hold a candle to Le Pétomane (much less extinguish it from across a stage). These self-described fartistes may appear regularly on shows like Howard Stern or Jackass, but they'll never be able to enthrall an audience like Le Pétomane or attract the attention of kings and nobility like Roland the Farter. History is fond of repeating itself, and once again the prestige of being a flatulist, like those braigetoír of medieval Ireland, has evaporated like gas in the wind.