Famous Phantoms of the Sea 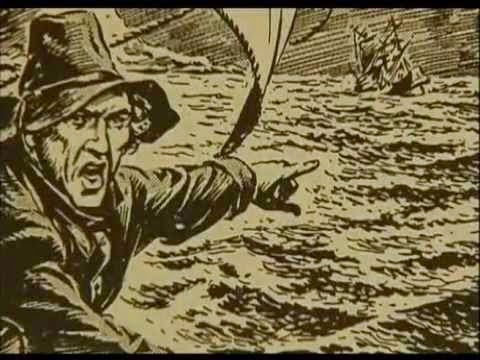 (The following is a reprint of an interesting article written by F.H. McLean, which appeared in the Washington Herald on June 2, 1909)

Sailors and fishermen are the most superstitious of men, as they are also the most sensitive to ridicule. On this account it is most difficult to get the old salts to relate the yarns of the ocean. For this reason, also, we on land hear little about the phantom ships and the ghosts of the sea. But on a recent trip along the coast of the British Isles, many legends were related to the writer which also recalled other phantom tales of the sea.
On the various parts of the British coast phantoms of the sea have frequently been seen. Cornwell, in the olden days, was notorious for wreckers, who worked their evil will along the ironbound cliffs. Priest Cove is still believed to be haunted by one of the gentry who, during his lifetime, preyed upon the spoils of ships lured ashore by a false light hung around the neck of a hobbled horse. On stormy nights the wrecker is seen, but now no longer on shore. He clings to a fragment of timber among the waves, and is finally dashed upon the rocks and disappears in the raging breakers.

Among the fishermen of the rugged coast of Kerry the following legend, connected with the fate of wreckers, is told. Early in the eighteenth century, one cold winter morning, a large ship, mastless and deserted, was founf wedged in among the rocks of that deadly coast. The wreckers immediately pushed off, and to their joy found that the galleon was laden with ingots of silver and other rich products of Spanish America. They filled their boats to the water's edge and were pulling back, when a huge tidal wave came rushing up out of the west and instantly swallowed them up. When the wave broke not a sign remained of the boat, men or ship, to the horrified watchers on the shore. The tragedy is said to be re-enacted upon each anniversary of the day.

Of all the ghostly wanderers the "Flying Dutchman" is probably the best known, and his story is the most familiar. The version usually accepted is that Cornelius Vanderdecken, a Dutch sea captain, was on his way home from Batavia when, in trying to round the Cape of Good Hope, he met with baffling head winds, against which he vainly struggled for nine long and weary weeks. At the end of that time, finding that his ship was in exactly the same position as at the beginning, Vanderdecken burst into a fit of impious passion and, falling upon his knees upon the deck, he cursed the deity and swore by heaven and hell that he would round the cape if it took him until the day of judgment. Taken at his word, he was then and there doomed to beat to and fro for all time, and sailors' superstition connects the appearance of his phantom ship with certain and swift disaster.

The present Prince of Wales, while cruising with his late lamented brother on the Bacchante in 1861, was a witness to the appearance of a phantom ship. The apparition has been described in these words:

"On July 11th, at four o'clock in the morning, the Flying Dutchman crossed our bows. A strange red light, as of a phantom ship all aglow in the midst of which light the masts, spars and sails of a brig two hundred yards distant stood up as in strong relief. Thirteen persons in all saw her, but whether it was Van Dieman or the Flying Dutchman, or who else, must remain unknown. The Tourmaline and Cleopatra, which were sailing on our starboard bow, flashed to ask whether we had seen the strange red light."

It is a curious fact that six hours later the able seaman who was the first to sight this terrifying apparition fell from the foretop-mast crosstrees and was killed.


There is another Flying Dutchman in the latitude of Cape Agulhas. This is Bernard Fokke, who lived in the latter half of the seventeenth century, and who was very different from the ordinary type of Hollanders. Fokke was absolutely fearless and reckless and boasted that his vessel could beat any other afloat. He cased her masts in iron and crowded more sails upon her than any ship dared carry to make good his boast. It is on record that he made the trip from Rotterdam to the East Indies in ninety days, a feat which in those days seemed miraculous. In his anxiety to beat even his own record, the story goes that he sold his soul to the Evil One, and Fokke and his ship both disappeared at his life's end. With no other crew than his boatswain, cook and pilot, transported to the scent of his exploits, he is condemned to strive endlessly against heavy gales that ever sweep him back.

The fact remains that whether the phantom ship be that of Vanderdecken or Fokke, nine tenths of all the reported appearances of phantom ships are between the fortieth and fiftieth latitudes. Rarely a year passes without some vessel sighting these ghostly wanderers of the sea. While spectre ships usually hail any vessel which they meet, all sailors believe it the height of bad luck to reply in any way.

The rocky coast of New England is haunted by several ghost ships. The story of the Palatine is a terrible one and her appearance flying down Long Island Sound is generally recognized by coasters and fishermen as a forewarning of a disastrous storm. The Palatine was a Dutch trader which went ashore on Block Island in 1752, lured by false lights exhibited by wreckers. Having stripped her, the wreckers fired her in order to conceal all traces of their crime. As she was lifted by the tide and carried, wrapped in flames, out to sea, shrieks of agony burst forth and a woman, supposedly a passenger who had hidden from the wreckers, appeared on deck amid the crackling blaze. In an instant the deck collapsed and she vanished.

Another phantom ship which is an omen of disaster is the vessel built at New Haven, which sailed on her maiden voyage in January, 1647. The following June, one afternoon there came a furious thunderstorm and after it was over about an hour before dark, the well known ship was sighted sailing into the river mouth-- but straight into the eye of the wind. The shore was soon crowded with people watching her, but while still a mile or more away she slowly vanished. The apparition, it was agreed, signified that the vessel herself had been lost and in fact she was never again heard of. Longfellow's poem, embodying the story, is well known, but one verse may be quoted:

And the masts with all their rigging
Fell slowly one by one;
And the hull dilated and vanished
As a sea-mist in the sun.

The flagship of the fleet sent by Queen Anne against the French still haunts the stormy Gulf of St. Lawrence. Just as the fleet reached Gaspe Bay, a fearful gale rose suddenly and the ships were driven, one after another, on the rocks and dashed to pieces or sank. Under the cliffs of the ill-named Cape d'Espoir, the flagship came to her end, and upon each anniversary of the wreck she appears. Her deck is seen covered with soldiers and from her wide old-fashioned ports, lights shine brightly. Up in the bow stands a scarlet-coated officer, who points to the land with one hand, while the other arm is around the waist of a handsome girl. Suddenly the ship lurches violently, the lights go out, her stern heaves upwards, and screams ring out as she plunges into the gloomy depths and vanishes.

Many of the phantoms of the sea are not easy of explanation and have ever remained a mystery, while others have been elucidated, as for instance the well known phantom ship of Cape Horn. Vessels on their way from Europe to Western America via Cape Horn, have been startles time and time again by the sight of a large ship with decks awash drifting in an almost impossible position beneath the giant cliffs of the Straits of Lemaire. At night or in storms this barque with her towering white sails has indeed a strange appearance. The Crown of Italy, attempting to go to the aid of the supposed derelict, ran upon a reef and was wrecked, and several other vessels met a like fate. At the request of the United States, the Argentine government sent a steamer to investigate. It was found that the supposed phantom was nothing but a rock, which by a freak of nature was white instead of black like those surrounding it, and bore the most startling likeness to a ship with sails set and deck just level with the waves.