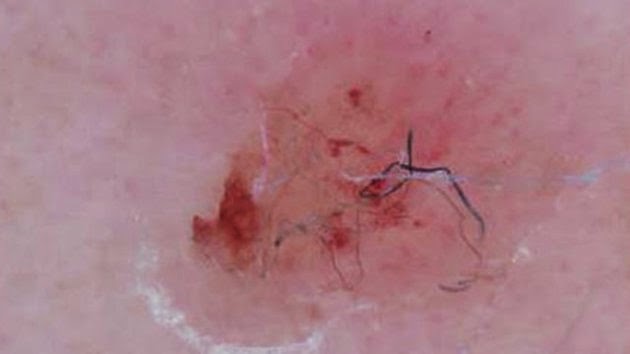 Of all the diseases and disorders that plague the human body, few are as strange and as controversial as Morgellons Disease, whose sufferers claim that things such as odd fibers, mysterious hairs and strings and other thread-like objects grow from their body or beneath their skin. Formally named in 2002, the medical establishment is of the consensus that this disorder- which predominantly affects caucasian women- is, in reality, a mental disorder.

This rebuff by the medical establishment, however, does nothing but infuriate those who suffer from Morgellons, who feel that they are being ridiculed and "written off" by the very same people who have been sworn to help them under the Hippocratic Oath. Robert Bartholomew, a sociologist who has studied the Morgellons phenomenon, has even gone so far as to state that the "World Wide Web has become the incubator for mass delusion and it (Morgellons) seems to be a socially transmitted disease over the Internet."
Because of the lack of information and research into this intriguing topic, many Morgellons sufferers have come to believe in bizarre explanations for their situation, ranging from "implants" embedded into their body by extraterrestrials or super-secret government organizations, to the effects of eating genetically modified foods. Still others insist that there is a government conspiracy afoot, as the Centers for Disease Control released a study in 2012 indicating that there were no disease organisms present in Morgellons patients. The CDC ultimately concluded that the condition was "similar to more commonly recognized conditions such as delusional infestation".

With so many Morgellons patients posting photographs of objects they've actually pulled from their skin, this "official explanation" doesn't hold water. So, then, what's the deal with Morgellons?
Our theory is that Morgellons is not a disease at all, nor it it the result of delusion. It is merely the natural method by which the human body rids itself of foreign objects which the sufferer has "consumed" (put into their bodies) at some point during their life. This, of course, explains why the multi-year study conducted by the CDC found no disease organisms in Morgellons sufferers, and also explains why people really do appear to be pulling weird objects out of their own bodies.

Perhaps the most misleading information about this phenomenon comes from the selfsame researchers who attempt to debunk Morgellons (without offering any suitable explanation themselves). Most sources claim that the symptoms associated with this disorder have not appeared until recent years. For example, a 2005 article written by Benjamin Chertoff in Popular Mechanics asserted that no reports of strange fibers exuding from the skin predate the formation of the Morgellons Research Foundation, while a 2006 article in the LA Times insists that the Internet is solely to blame.

This is not the least bit true.

Even the medical establishment of the 19th century was vaguely aware of the body's ability to "spit out" foreign matter, which led to many surgeons abandoning the use of silk sutures and favoring catgut and other materials which the body can absorb. Surgeons of the 19th century frequently wrote about the human body "spitting silk", sometimes years after the operation had taken place. In many of these incidences, the patients experienced threads and fibers growing from their bodies, often times from parts of the body that were nowhere near the original operation site.

The body's ability to transport foreign objects has been well documented for over a century. In 1896, a 51-year-old man named David Cummings felt a strange pain in his shoulder. After the pain relocated to his hip he visited a doctor, who prescribed a topical ointment. A few days later, Cummings saw something black extruding from the sore spot on his hip. He pulled it out and discovered a sewing needle, which had somehow entered his body without his knowledge. In 1917, a Dr. Congdon from Wenatchee, Washington, removed a needle that was growing out of the leg of a woman named Mrs. A.F. Franz, which she had accidentally swallowed as a child more than thirty years earlier. Even more remarkable is the case of Charles Fisler of Harrisburg, Pennsylvania. In 1905, Fisler went to the hospital complaining of an itch on his right arm that was driving him crazy. After a full battery of tests and X-rays, surgeons finally removed from his body a bullet which had been inside his body for more than ten years. More remarkably, however, was the fact that the surgeons did not find the bullet in Fisler's itchy right arm, but in the tip of his left toe!

One would be surprised to discover the amount and variety of foreign material that can collect inside the human body over the course of a lifetime: lint and fabric fibers that have entered the body through inhalation, tiny bits of plastic and cellophane or particles of metal that have entered the body through accidental ingestion, or by entering through an open wound. Even hair, which the body cannot digest, accumulates inside the stomach until the day we die. Not all of this debris is expelled from the body by "normal" means.

The fact is that human skin was designed to be permeable. Even desmosomes- the molecular "glue" that holds the cells of our body together- have spaces between them of about 30 nanometers. If these desmosomes are not functioning properly, layers of skin can pull apart, which will allow abnormal movement of fluid within the skin- a perfect "river" for transporting trapped foreign objects from one part of the body to another.

Ultimately, neither the medical establishment nor Morgellons patients are correct about the nature of this condition, since Morgellons Disease is neither a disease nor a psychological disorder, but rather a basic function of the human body resulting from the very design of our skin. To label this phenomenon a disease is the equivalent of labeling sneezing, coughing, and urination as medical diseases or psychological disorders.