on July 14, 2015
Is a secret Navy program to blame for the recent surge in shark attacks? 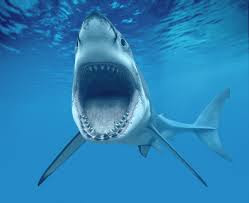 Editor's Note:  Over the years we've received numerous emails from people making outrageous claims; we've been contacted by alleged UFO abductees, Sandy Hook conspiracy theorists, self-proclaimed psychics, and even so-called "black-eyed children". The following is an outrageous claim made by a gentleman from San Diego who claims that the ever-increasing frequency of shark attacks, not just in America but around the world, is the result of a secret "black budget" Navy program conducted between 1962 and 1969. This gentleman (who wished to be identified simply as "Hans") claims that he was employed as a marine biologist working for the Navy, first at a research facility at Point Mugu, California and later at a naval research facility at San Diego. The project, he alleges, involved the selective breeding of sharks in order to increase their aggression. These "angry sharks" were then released back into the ocean and permitted to reproduce, with each subsequent generation becoming more aggressive toward humans.

The following article is condensed from a series of emails we received from Hans between May and July of this year, edited to remove typographical errors and formatted to improve readability. We at Journal of the Bizarre make no claims as to the veracity of Hans' confession; we are simply presenting his most unusual story.


After completing my studies at the University of Heidelberg in West Germany in 1961, I defected and obtained a teaching position in Bremen. Around this time I was contacted by the United States Navy and asked to take part in a research project in California. I was told that this project may give the United States, Germany, and other NATO allies, a crucial advantage in the Cold War.

I was assigned to a brand-new naval research facility that had been built at Point Mugu, about ten miles south of Oxnard. The facility was built on a narrow sandbar and by all appearances seemed rather innocuous. During the construction of the facility, the press were told that our objective was to study dolphin intelligence. Dolphins were indeed a focus of much of our research at Point Mugu; we attempted to train them and put them to work detecting land mines and delivering coded messages. We proved this could be done a few years later in 1965, when we trained a dolphin named "Tuffy" to transport messages. This experiment, of course, was part of the SEALAB II project, in which I played a very minor and insignificant role.

Naturally, as you can imagine, I had very little exposure to dolphins in Heidelberg and Bremen, so dolphin intelligence did not fascinate me. My expertise was in genetics. In Bremen I had overseen a research project that centered around the selective breeding of chickens, in attempt to make them "meatier" and more resistent to disease. This was an important project because East Germany had a very rational fear of food shortages at this time. Strangely, it was my work with chickens that caught the attention of John P. Craven, who would later be appointed Chief Scientist of the Special Projects Office for the Navy.


Craven was, to put it bluntly, a mad man. He had wild ideas. One of his pet projects was weather modification, and he would later go to work on secret weather modification programs under President Carter. But, when I first arrived in California, Craven was fascinated with sharks.

Craven theorized that selective breeding could be used in order to populate certain geographical areas with super-aggressive sharks. For instance, one of the Navy's key concerns was the Strait of Florida, which divides Key West from Cuba. After the failed Bay of Pigs invasion in 1961, it was feared that members of Castro's Revolutionary Armed Forces would attempt to retaliate by covertly sending guerilla fighters across the strait and into Florida. Another concern was Brigade 2506 (the CIA-sponsored paramilitary group comprised of Cuban exiles). It was feared that members of this guerilla brigade, having been let down by the U.S. and marked for death by Cuba, would attempt to re-entry into the United States. The CIA, who did not want the American public to know about its secret involvement with Brigade 2506, wanted surviving members of the brigade "liquidated". While at Point Mugu, I even heard one crazy rumor that Castro, in tandem with the Russian KGB, might attempt a primitive form of biological warfare against the U.S. by infecting Cuban prisoners with anthrax and sending them floating across the narrow strait on everything from rubber rafts to wooden doors. What can I say? It was an era of crazy rumors. But in 1961, these things seemed perfectly plausible.

Other areas where the sharks would be released included the Bering Strait, the Strait of Tiran, and several points in the Gulf of Suez. The latter two operations were to be carried out by the Israeli military.

The genetically-modified sharks would be kept contained by use of an underwater "electronic fence" of sorts, similar to the invisible fence used today by dog owners. The apparatus, which was being developed in Point Loma, California, under the direction of the U.S. Navy Electronics Laboratory (presently known as Space and Naval Warfare Systems Center Pacific) utilized ultrasonic acoustic frequencies.

And this is how Project Lamia was born.

(Editor's note: In Greek mythology, Lamia was the daughter of Poseidon who had an insatiable appetite for children. The mother of sea-monsters Skylla and Akheilos, Lamia was often depicted as a vicious shark.)

From the beginning, Project Lamia was classified as a black budget program. As our project grew in size, my team (there were six of us involved in Project Lamia; myself and two other West German biologists, one Swiss geneticist, and one other American geneticist) required a larger facility, and so the Navy moved us from Point Mugu to Point Loma, where we worked under the direction of Space and Naval Warfare Systems Center San Diego. By 1967, our entire spectrum of operations was classified as black budget, including the U.S. Navy Marine Mammal Program- those scientists studying dolphin intelligence. People often ask me why dolpin intelligence was considered "top secret" and classified as a black budget program, and the reason was because several of us who worked on Project Lamia also worked and shared facilities with the mammal program.

By injecting shark pups with various hormones, we were able to accomplish two things: bring them to sexual maturity at a younger age, and significantly shorten the gestation period. During my seven years working on Project Lamia, we were able to produce four generations of genetically-modified bull sharks and blue sharks, and three generations of great whites and tiger sharks- with each subsequent generation more aggressive than the last. This was accomplished by placing the newly-born pups into a large tank and observing their behavior. Pups that did not display signs of aggression were released, while the aggressive male pups were injected with hormones and brought quickly to sexual maturity and then bred with adult females. After each birth the cycle was repeated.

I would like to say that our work involved state-of-the-art scientific equipment and complex chemical compounds, but that was not the case; in reality, it was insanely easy to achieve our objective. So easy, in fact, that we were suprised other nations weren't already conducting their own similar experiments. In seven short years, we turned poodles into pit bulls.

Project Lamia ended in 1969 due to the intensification of the war in Vietnam, but not until our third and fourth generation of genetically-modified sharks were already released into the world's oceans. One of my former colleagues decided to carry on the project independently after our funding had been cut by the Department of Defense, with the continued support of the CIA. As late as 1973 he was engaged in selective breeding species of freshwater sharks, such as the glyphis gangeticus, which he hoped to introduce to the Rio Grande as a deterrent to illegal immigration. However, I believe he never succeeded in this endeavor, as glyphis sharks do not fare well in captivity.

The reason we are seeing such a surge in shark attacks today is because of Project Lamia. Of this I have no doubt. While we were able to expedite the reproduction process in a controlled environment, we cannot control nature. In their natural habitat, the female great white shark does not reach sexual maturity until 30 years of age. This means that the third-generation genetically-modified sharks we released into the ocean in 1969 began to reproduce on their own sometime around the year 2000. This also means that their male offspring- now the 4th generation of male great whites and the 5th generation of male bull sharks and blue sharks- are just now coming into sexual maturity and, therefore, are at the peak of their aggression.