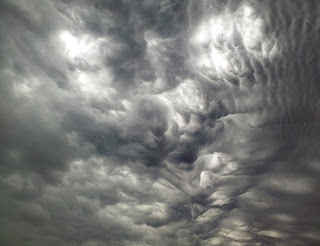 In the summer of 1914 bizarre objects and unexplained lights were seen by multiple witnesses in the skies near Berwick and Mifflinville in central Pennsylvania. Some described the object as a "floating mansion", with thousands of white-clad children riding in it. The light it produced, according to one witness, lit up the night sky as if it had been daytime. Yet another witness, a 16-year-old girl, claims that she saw the form of an angel.

So what exactly appeared over Columbia County that summer? A UFO? A religious apparition? An omen? Was it simply a case of mass hysteria? Read the following newspaper accounts and draw your own conclusion. The following excerpt comes from the July 31, 1914 edition of the Danville Morning News:

A Mansion, Marching Children and Angel Appear Before Hetlerville Residents.

Residents of Hetlerville, a village in Mifflin Township, Columbia County, have been interested to a point bordering on superstitious fear by the stories told by well known and entirely responsible parties of peculiar sights which they have been seeing in the sky.

On Friday night last* Harry Huddleson was going home from Nescopeck when his attention was attracted to the sky, and he was startled to see a picture vividly outlined in the heavens of an immense house filled with children dressed in white and each child having about its arm a black band. And while he looked the children came out of the house in columns of two dividing at the door with a column going in opposite directions. The sight was too plain for him to be mistaken and he was not dreaming, Mr. Huddleson declares, with emphasis. Greatly impressed by the sight he told the family but said little elsewhere until on the following Sunday, Mrs. Rush Lutz, a resident of that place, related a similar and equally remarkable experience.

Mrs. Lutz went into the yard at eleven o'clock Saturday night to take from the line the clothes she had washed that day when she also was attracted by the appearance of the sky. An immense house was shown vividly with an effect that she describes as wind waving through a rye field or as a picture would be on a screen if the canvas was being blown about. Mrs. Lutz is also equally positive. She wondered at the phenomena and hurried into the house. The sight remained for ten minutes or more.

The description Mrs. Lutz gives of the building she saw pictured in the sky and that of Mr. Huddleson are remarkably similar. Neither offered any solution and together with everyone to whom they told their experiences both were greatly mystified. That some sign was meant was the usual interpretation with thoughts at first of some terrible happening or disaster. Still another, Miss Pearl Pursel, declares that she saw in the heavens the form of an angel.

A possible solution is that it was a mirage. On the ocean and on a desert the reflection is frequently seen in the skies of objects far away. This is explained by the particular state of the atmosphere and the conflicting air currents that give a reflection. That it is a mirage that each of the Hetlerville residents saw is a possibility and unusual weather of this summer may give some substantiation. Whatever the phenomena there is no doubt of its being full and thrilling reality to the persons mentioned and generally by the residents of Hetlersville and section adjacent as the occurrences are being widely related with general wonder expressed.

From the August 4, 1914 edition of the Danville Morning News:
More People See Sights in Skies

Visions Continue Before People of Columbia County Villages
There is almost anything to be seen in the skies up in Columbia County these days if you look at the right time! Following the experiences of Hetlerville folks, as given in these columns the other day, Scottown residents declared they likewise saw strange sights and in large numbers during the latter part of last week they viewed the phenomena.

The sights they saw nearly duplicate those of Mrs. Rush Lutz, who went into details in discussing the phenomena, after her first experiences got into print. Said she:

"The light that I saw in the sky made it light enough in the yard for me to see to wring out clothes. It was from an object in the sky that appeared bright almost as the sun. I can't explain it and don't try to. Anyone who has a solution to explain it.  The light was there. It was the strangest thing that I ever saw or expect to."
Mrs. Lutz spoke with an emphasis that showed her to have been profoundly moved by the strange experience. She continued. "I had some clothes to wring out. I lighted the lantern and lamp to go out to the well and when I was working the light appeared. It was light enough for me to work. As I looked across the fields I could see the wheat stubbles as plainly as in the day time and every object in the fields. I looked with awe at the heavens. It seemed to start at a point over Nescopeck Hill and swing across the heavens until it got to a point near the mountain and would go out, reappear and swing back. It did this three times across the skies. I ran into the house and upstairs and awakened my husband. It was a dark night. The sky was filled with stars but there was no moon. When the light disappeared it was perfectly dark. The light appeared to be like the front of a house. It was there a good many minutes. I was not fooled, was not dreaming and my eyes are not bad. I was thinking of nothing but my washing and would not have noticed the sky but for the fact that it grew so light about me that my lantern and lamp were not needed. I don't know what caused it or what it means, but it was there. God only knows."

Harry Huddleson, who saw the mansion in the sky and the smiling children, was driving to his home in Hetlerville from Willow Grove when he declares he saw the strange sight to which reference was previously made.

Going into more detail, Huddleson declares the sight he saw was that of a building outlined in a blaze of white. Then appeared two children, one entering and the other coming from the building. Both were dressed in white, although the bows in which their sashes were tied were different. Alongside the house were apparently thousands of children, each smiling. The faces of two became so distinct, he declared, that he would know them again.  Fearing he would be ridiculed he only told his wife and not until the Lutz and Huddleson families met, when Mrs. Lutz related her experience, did he make known the sight he had seen.

Miss Pearl Pursel, aged 16, who lives beyond Nescopeck and who saw the form of an angel, was deeply affected by the sight. She took it as an omen and couldn't get it off her mind. When she saw the strange sight of the skies she told no one other than her mother, likewise fearing ridicule.

Peter Eddinger, of West Berwick, declares that in the daytime he saw outlined in the skies an exact reproduction of a flag of perfect bars of black, red and a tint that resembled a light bluish green. There was not a cloud in the sky at the time and upon going home looked in the encyclopedia to see if there was any nation that had a flag like it, but found none.

That there has been some phenomena in the skies seems likely, for Scottown citizens whose attention was directed to the flashes that resembled those seen by Mrs. Lutz declared there could be no mistake as to what they had seen with their own eyes.

It is perhaps interesting to note that the apparitions first appeared on Friday, July 24, 1914-- just four days before the assassination of Austrian Archduke Franz Ferdinand in Sarajevo, which marked the beginning of WW1. Could the visions of white-robed children with black armbands (a symbol of mourning) signify the thousands of innocent children who would lose their lives in the conflict?