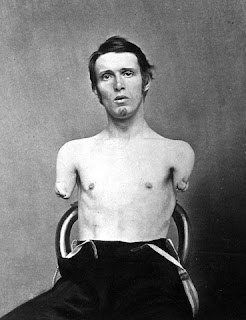 The feeling of sensation where a limb used to be has been documented for hundreds of years, although the term "phantom limb" didn't appear in medical texts until the latter half of the 19th century. Popularized by Civil War-era doctors like S. Weir Mitchell and French physician Albert Pitres, the phenomenon because the topic of much superstition well into the 20th century.

It was generally believed that in order to prevent phantom limb sensation, it was necessary to bury the severed limb as far away from the patient as possible, preferably with full funeral rites. This led to some rather interesting burials. For instance, one newspaper article from 1909 relates a strange event in Illinois:

J.H. McNinch of Rock Falls and James Borges of Maywood, who lost their right arms Saturday morning in a wreck of a Northwestern passenger train near West Chicago, implored that the amputated right arms should be properly embalmed and then shipped to the respective family burying grounds of McNinch at Rock Falls and Borges at Maywood. Dr. Isherwood, their physician, familiar with the strange superstition, obeyed the orders of the injured men to the letter and Untertaker C.E. Norris of West Chicago embalmed the two right arms, had them packed in wood caskets and Wednesday they were shipped with instructions that they be buried with funeral rites.- Belvidere Daily Republican, Sept. 6, 1909.

Although this superstition was practiced extensively in America, there are several accounts in which limb burials failed to achieve the desired result. In some cases, it even made things worse. One of the strangest stories involving phantom limbs took place in Kansas in 1881, and involved a boy whose arm had been amputated and buried.

A singular incident is reported by The Emporia Ledger of a young man who recently had his arm amputated while under the influence of chloroform. The arm was amputated and buried some twenty miles from Emporia, and the young man taken to the latter place. At times he complained of feeling a pain in the hand of the buried arm on account of the fingers being closed upon the thumb. The arm was exhumed, and the fingers found just as the boy had described. Again he said it pained him, because the fingers were bent. This was found to be true also, and the hand was straightened out and buried again, when all the pain ceased and the boy said he rested better.- The Leavenworth Times, Oct. 15, 1881.

This type of mysterious phenomenon has been well-documented:

-A man whose right leg had been amputated and buried complained of cramps in his left leg, and when the leg was exhumed it was found to be in a bent position. After the exhumed leg was straightened, the man's cramps went away. (1)

-An Oklahoma oilman named Anderson Pugh had his leg amputated and soon began feeling cramps in his phantom leg. He implored the church sexton to dig up the leg and straighten it out, which the sexton did. Pugh's pain immediately went away. (1)

-Another Oklahoman named Elmer Mize lost an arm in a railroad accident and experienced phantom pains in the hand of his severed limb, claiming that the hand was bent doubled. The arm was exhumed and the hand was indeed doubled, as Mize had claimed. Unfortunately, so much time had elapsed that that it was impossible to straighten the hand of the decayed limb, and Mize's phantom pains never went away. (1)

Similar incidents were reported by several leading physicians of the day, including Professor Pitres, who recalled meeting an old soldier who had lost both feet. The old man would sit for a half hour at a time massaging the ends of his shoes, where his corns used to be. "There's going to be a change in the weather, my corns are hurting me," the old man would declare. On being reminded that he no longer had corns, he would say, "Nevermind! I feel 'em all the same!" (2)

While research into phantom limbs is still taking place, modern science has failed to come up with many definitive answers as to how or why this phenomenon occurs. Could it be possible, at least in the cases mentioned above, that there is some form of telepathy involved? How else could one explain how an amputee can feel the pebbles between the fingers in his buried hand, or how a boy can perfectly describe the position of a severed arm that was buried twenty miles away?


Marlin Bressi is a freelance writer, creator of the Pennsylvania Oddities blog, and author of the book Hairy Men in Caves: True Stories of America's Most Colorful Hermits.