The curse of Claudius Smith's boots 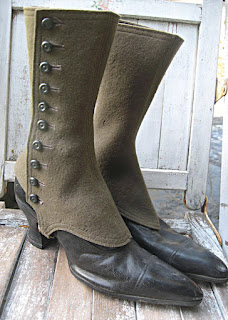 In Orange County, New York, three men died while wearing a pair of boots once worn by an outlaw who hanged on the gallows. The following is a true story based on accounts that appeared in newspapers in the closing years of the 19th century.

The story begins during the Revolutionary Era with an outlaw named Claudius Smith, a Loyalist guerilla leader who, along with three of his sons and other gang members, terrorized a part of Orange County known as Smith's Clove. Although Smith was regarded as a folk hero, historians agree that he never killed anyone. However, one of his men did rob and kill someone- an American patriot hero, Major Nathaniel Strong. In October of 1778, Governor George Clinton posted a reward for Claudius Smith, who was captured and hanged in the town of Goshen on January 22, 1779.

After he was escorted to the gallows in Goshen, he kicked off his boots just as the rope was placed around his neck. His last words were, "My mother said I would die like a trooper's horse, with my shoes on. I will make her out a liar."

Being viewed by many as a Robin Hood of sorts, curiosity seekers gobbled up every souvenir they could find, including the dead man's boots. The boots eventually passed into the hands of Brainard Pierson, a local farmer.

"But, of course, you're not going to wear them, Brainard?" everyone asked.

"Ain't I? Well, but I am, though, most surely!" Pierson would reply, not caring that the famed boots of the infamous outlaw were said to be cursed. Pierson stated that he would wear the boots the following day during a long cattle drive he was planning on taking to New Jersey.

The following morning Pierson started out for New Jersey with his cattle. Near Ramapo Pass, a man heading toward Goshen observed a large drove of cattle, but with no drover to be found. He continued down the road and, about a quarter of mile later, stumbled over the body of a man. It was Bainard Pierson, with a dead rattlesnake at his feet. The dead man's face was black and swollen, and it was believed that Pierson had killed the rattlesnake just moments before he was overcome by its venom. One of the snake's fangs was missing.

The boots remained in the Pierson family, unworn, for ten more years until the Pierson house was robbed. Among the property stolen were the boots. Two days after the robbery George Pierson, Brainard's son, was hunting on Seven Springs Mountain and discovered a man's corpse near one of the springs. The dead man's face was also black and swollen. George immediately recognized the boots that the dead robber was wearing, and when he removed them he saw a tiny purplish-red puncture wound on the man's right ankle.
George searched the woods and eventually found a bundle of items that had been stolen from his home. He returned home with his stolen property and the boots that had once belonged to Claudius Smith. The dead robber was never identified, and was buried in an unmarked grave on the mountain. The boots once again remained in the Pierson family for several years.

Many years after the death of Brainard Pierson, a distant relative from Ringwood Valley came to visit and became fascinated by the cursed boots. He wanted to buy them but the Pierson family refused to sell, warning him about the curse of Claudius Smith. The relative insisted that there weren't any rattlesnakes in the valley where he lived, and the Piersons decided not to sell the cousin the boots, but instead gave them to their cousin as a gift.

Not long afterward the father-in-law of the relative, who was unaware of the curse, put on the leather boots and went for a walk, staggering home a short while later. Within an hour he was dead, with a black and swollen face. He, too, had been bitten on the right ankle by a rattlesnake, even though there was not a rattlesnake in all that part of the valley.

The "mystery" of the curse was solved by the doctor who examined the father-in-law. He removed the boots and slit them down to the ankle. Something small and white fell from the ankle of the right boot onto the floor. It was the fang of a rattlesnake, believed to be from the same snake that had bitten Brainard Pierson during his ill-fated cattle drive. The doctor examined the fang and concluded that there was still enough venom left in the channel to kill another man. The fang had embedded itself in the leather of the boot and had broken off the snake's mouth when Brainard grabbed it and killed it.

Were the three deaths a curse from beyond the grave or just a coincidence caused by a fang embedded in the leather?

Marlin Bressi is a freelance writer, creator of the Pennsylvania Oddities blog, and author of the book Hairy Men in Caves: True Stories of America's Most Colorful Hermits.
Claudius Smith cursed