A visit from beyond the grave? 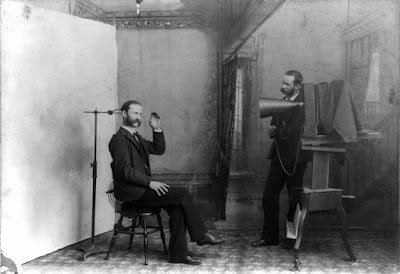 Since its inception in 1892, the Society for Psychical Research has published innumerable papers on paranormal phenomena from around the world, while being one of the first organizations to catalog and archive reports of the strange and unusual. One of its earliest cases, which took place at a London photography store in January of 1891, still stands as one of the most unusual.

On Saturday morning, January 3, 1891, a photographer named James Dickinson arrived at his London studio around eight o'clock, and a little while later a young man by the name of Thompson stopped in to inquire whether or not his photograph was finished. Dickinson looked into the matter and informed Thompson that his photograph was not yet finished, but informed the customer that he should have it ready later that afternoon.

"But I've been traveling all night," the customer complained, "and I can't call again." Thompson unhappily left the studio without another word, and Dickinson chased after him. "Shall I put them in the mail?" the photographer called out, but there was no reply. Not knowing what else to do, Dickinson jotted the man's name and address onto a piece of paper with the intention of mailing Thompson the finished photograph.

Dickinson then went upstairs and asked his assistant, a young woman, to fetch Mr. Thompson's negative, intending to print it right away. A few minutes later the assistant returned with the negative. Dickinson examined the negative thoroughly, and then remarked, "Yes, that's it. That's the chap who came by this morning".

When Dickinson went to print the negative, he dropped the old-fashioned photographic plate and it broke, thus rendering the negative useless. He then wrote to Mr. Thomspon apologizing for the accident and asked him to come in for another sitting at no charge.

Six days later a man who identified himself as Thompson entered the London studio and explained that he had received a strange letter from Dickinson. The letter was strange, said Mr. Thompson, because he had never sat for any photograph.

"You're not the same man," agreed Dickinson. "He was much younger than you." The photographer concluded that he had mistakenly sent the letter to the wrong person. It would have been a strange coincidence, he thought, that both men shared the same last name. But the young customer had given him the address. Perhaps it was some sort of poractical joke, Dickinson wondered.

When Dickinson described the young man, Mr. Thompson said, "Yes, that must have been my son who lived at the same address. But he died suddenly."

"Died? Well, it must have been very sudden. He was in here last Saturday."

"You must be mistaken," answered Mr. Thompson. "It must have been before that".

"But my son died very early Saturday morning. At the time you say he was here, he had already been dead several hours."