The Ghost of Jimmie Welsh 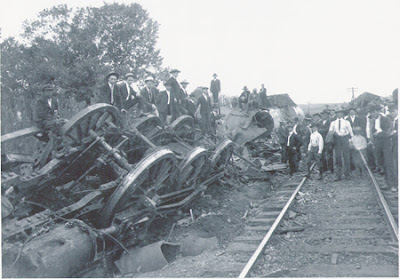 In 1890, a terrifying apparition haunted the tracks of the Lake Erie and Western Railroad. The ghost-- who appeared to be looking for his lost head-- was believed to be that of Jimmie Welsh, a train conductor who met his unfortunate end in November of 1889.

The following newspaper story about the ghost of Jimmie Welsh appeared in the Chicago Tribune on March 19, 1890.

Trainmen on the Lake Erie and Western railroad between Findlay, Ohio, and Fostoria are greatly disturbed over what they claim is the ghost of a dead freight conductor. The conductor was killed one night last November, at Arcadia, about eight miles east of this city, by his train breaking into two sections in such a manner that he was thrown to the track from the car on which he was standing and beheaded by the wheels before the train could be controlled.

The accident occurred at a point where dense woods nearly arch the track, above the rails, and here it is, the trainmen assert, the ghost of the mutilated conductor- who was known in life as Jimmie Welsh- makes its appearance nearly every night as the midnight train going west from Sandusky reaches the spot where Welsh met his fate. The engineer and other officials of the train say that when these woods are reached an object looking like a headless man comes walking slowly out towards the track with a lantern in its hand, which it waves backward and forward as if searching for something.

The trainmen are positive that it is the ghost of Welsh hunting for the head which was severed from the body by car wheels. They insist that this object is plainly visible until the engine passes by, when the phantom slowly turns and fades away among the trees.

Two crews have already abandoned this run and have been transferred to other divisions of the road on account of this alleged ghost, and the engineer who brought this train through a few nights ago was so terrified over encountering this headless conductor that when he reached this city it was with difficulty that he was persuaded to stay on his engine until relieved at Lima. He said that he could not pass through another such experience for any sum of money.
ghosts Ohio railroad disasters