Was a Bigfoot skeleton unearthed in Oregon in 1912?

on December 01, 2015
The Mystery of the Ellensburg Giant 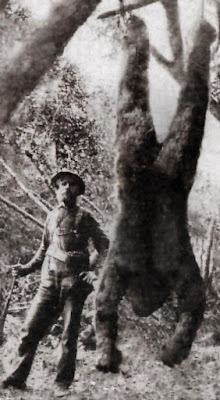 In early 1912, workmen discovered a most unusual skeleton near the Oregon coast, while digging in the present-day city of Gold Beach (formerly known as Ellensburg). It was the skeleton of a veritable giant, measuring nearly eight feet in height. While many archaeologists of the era were unearthing strange skeletons of human giants all across the United States (leading many to believe that an ancient race of giants once roamed North America), the Ellensburg Giant-- as it came to be known-- was rather different.

The most curious feature was the skull, which featured a sloping ape-like forehead, along with not one, but two rows of teeth in its upper jaw. Unlike many of the other giant skeletons unearthed in the 19th and early 20th centuries, the skull of the Ellensburg Giant did not feature the high, prominent cheekbones that were the hallmarks of Native American heritage.

The earliest recorded account of this startling archaeological discovery comes from May 16, 1912 and can be found in a small rural newspaper from Washington State called The Newport Miner. It reads:

Ellensburg.-- A skeleton of a primitive man, with forehead sloping directly back from the eyes and with two rows of teeth in the front of his upper jaw, was uncovered here when contractors were excavating for an apartment house. The skeleton was found in the cement rock formation, over which was a layer of shale rock. The rock was perfectly dry and doctors say that the skeleton could have remained in that formation hundreds of years without rotting. The jaw bone, which broke apart when removed, is so large that it will go around the face of a man of today. The other bones are also much larger than that of ordinary men. The femur bone is 20 inches long, which, according to scientific men, would indicate that the man was 80 inches tall, or approximately six feet and eight inches.

Subsequent stories about the Ellensburg Giant appeared in newspapers all across the country; however, by the end of summer, the skeleton was reported as being a full eight feet in height. Perhaps, like a folk legend, the skeleton grew larger as the story wound its way from the Pacific Northwest to the East Coast. Or perhaps the giant's height was revised when the bones were studied by better-trained experts beyond sparsely-populated Curry County.

In any event, later newspaper stories shed additional light on the strange skeleton found at Ellensburg. The following, which originally appeared in the Portland Telegram, is a story about the giant that was published in numerous American papers throughout the fall of 1912:

The discovery of the bones of a human giant at Ellensburg is one of the most interesting anthropological finds made in the northwest, according to L.L. Sharp, chief of the general land office. "I just returned from Ellensburg," said he, "where I had opportunity to view the bones unearthed. The skull, jawbone, thigh and other parts of the largest skeleton indicated a man to my mind of at least eight feet high. A man of his stature and massive frame would weigh fully 300 pounds at least. The head is one of the most remarkable I ever have studied among prehistoric skulls. It is massive, with enormous brain space.  While the forehead slopes down somewhat, not averaging the abrupt eminence of our present race, the width between the ears and the deep, well-rounded space at the back of the head and convincing testimony of high intelligence for a primitive man. The cheekbones are not high, like those of the Indian, nor has the head any resemblance to the Indian skull. I am convinced that this skull is of a prehistoric man who was one of a remarkable race of people who inhabited this part of America some time prior to the Indian control.

"The bones were uncovered fully 20 feet beneath the surface. There is the usual gravel formation on top, then the conglomerate, a stratum of shale, and in a bed of concrete gravel beneath the shale were the bones of the giant and of a smaller person. The shale would indicate tremendous age, perhaps more than 1,000,000 years, for the deposit in which the skeleton was found. But this I deem impossible, and presume that the bones were put beneath the shale by means of a tunnel perhaps, or some other system of internment. I cannot think it possible that a human being of the advanced stage indicated by this great skull could have existed at the period when the shale was formed."-- Portland (Ore.) Telegram

One cannot think about the Pacific Northwest without entertaining thoughts of Sasquatch, but since the very word Sasquatch would not even be coined for another decade (by Canadian journalist J.W. Burns), there would be very little reason for Oregonians to connect the strange skeleton to the mythical cryptid. And yet, Curry County and surrounding areas have a rich tradition of Bigfoot sightings, which establishes the possibility that the Ellensburg Giant very well might have been an actual Bigfoot.

According to the Bigfoot Field Researchers Organization (BFRO), Curry County has nine documented Bigfoot sightings and reports going back to 1969. Of these, many took place near the Rogue River, upon which the city of Gold Beach now sits. Neighboring counties also have a higher-than-average number of Bigfoot sightings; Coos County has 7, Douglas County has 17, Josephine County has 21, and neighboring Del Norte County in California has a whopping 27.

Unfortunately, the final whereabouts of the skull of the Ellensburg Giant have been lost to history and, with it, perhaps the most crebidle evidence supporting the existence of one of the world's most famous legendary creatures.