Haunted Ships: The Mystery of the Mirabel 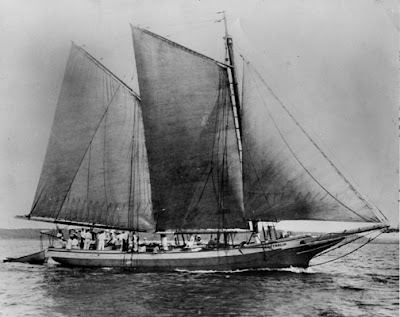 On March 15, 1892, the schooner Mirabel arrived in Philadelphia after a journey from the Cuban port of Matanzas. When she pulled into port, it was evident that something was wrong. Very wrong. What follows next is a strange, unbelievable, but entirely true tale of the briny deep.

The first indication that something was amiss aboard the Mirabel was that the entire crew, except for the captain, was entirely new. It was not the same crew that had departed from Matanzas on January 20, and Captain Joseph Sims was deluged with questions from those who anxiously waited on the docks for the return of their seafaring husbands and sons.

When the Mirabel had left Cuba, the schooner was manned by thirty experienced sailors, mostly Englishmen. Nearly all of them had served on the Mirabel for a number of years. However, before setting sail for Matanzas several new crewmen had been taken on. Captain Sims was delighted to discover that these new men proved to be capable sailors and hard workers. Except for one man.

This sailor turned out to be addicted to the bottle and drank continuously, from morning until night. Captain Sims looked the other way at first, however, because the drinking did not seem to interfere with the sailor's work. But the captain grew more concerned when he realized that, sooner or later, the sailor's bottle would grow empty. He implored the sailor to give up his habit.

"He did not drink anything the next day, but it was very hard on him and I felt very sorry for the poor fellow," said Captain Sims. "He was on watch that night from midnight until daylight. The last thing I said to him before he went on deck was, 'Remember, Bilson, about the liquor', to which he replied that I need not fear."
Two hours later, the captain was awakened from his slumber by a tremendous noise on deck.  Hastening above, he saw two of his crewmen struggling with Bilson, attempting to hold him down. They explained that Bilson was trying his hardest to throw himself overboard.

"On inquiring what was the matter I was told that the fellow was suffering from delirium tremens and wanted to drown himself," explained Captain Sims. The sailors eventually subdued the delirious crewman and placed him in irons. He howled and raved the entire night. Bilson, unable to recover from his delirium, died the following afternoon. The crew kept his body until the following day, when they wrapped it in a canvas sheet and buried him at sea.

Two nights later Captain Sims was awakened by a knocking at his door. It was the midnight watch, and his face was as white as chalk. The watchman informed the captain, in a trembling horror-stricken voice, that he had just seen Bilson on deck, sitting atop a coil of rope in the stern of the boat. The captain told the sailor that he must have been dreaming. The watchman adamantly insisted that he had not been asleep-- and then said that he could prove it. "He's still there, Captain. Go see for yourself."

Captain Sims reached the deck and looked aft, his own face turning the same shade of white as the night watch. There, upon a coil of rope, sat Bilson, with his head erect gazing fixedly at the sea. The captain called out to him but Bilson did not move. The captain approached the phantom but as soon as he reached the pile of rope Bilson vanished.

The following night Bilson once again made his appearance, and the dead sailor continued to haunt the pile of rope for several days, until every man on board saw it. The crew of the Mirabel grew restless and demanded to abandon the ship as soon as it reached Matanzas.

"The last time Bilson's ghost appeared was the night before we got to Matanzas," said Captain Sims. "At the usual hour we were all on hand waiting for the apparition. We had not long to wait, for in a short time the ghost appeared, from where no one could tell, and took its accustomed seat on the rope. After gazing into the water a short time it arose and pointed its finger in the direction of the town we were approaching. It then walked noiselessly to the deck rail and, looking into the water, shuddered. It again turned and looked toward Matanzas, then gave a leap and disappeared beneath the waves without a sound."

As soon as the Mirabel pulled into port every sailor abandoned the ship, except for Captain Sims, who was now forced to find a new crew for the return voyage. The ghost of Bilson did not reappear on the return trip from Cuba to Philadelphia. When interviewed by reporters, Sims theorized that Bilson might not have been dead when his crew buried him at sea, and may have reappeared as a ghost in order to alert Mirabel crew to this fact.