The Blue Man of Spring Creek 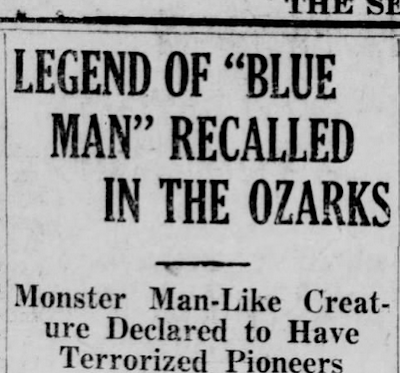 The legend of "The Blue Man of Spring Creek" has been circulating throughout the Ozarks of Douglas County, Missouri, since the times of the Civil War. Those familiar with the legend will note the striking similarities to Bigfoot. However, since the "Blue Man" predates most North American accounts of Bigfoot and Sasquatch, could it be possible that this mysterious creature was the true "missing link"? Might the "Blue Man" possibly be the patriarch of all Bigfoots?

The legend can trace its roots back to the winter of 1865, when a hunter named Sol Collins stood on the ridge between Big North Fork and Spring Creek. Collins, an experienced and expert hunter, was following wild game tracks in the snow and came upon a track he had never seen before. It was similar to that of a bear, but longer and much broader, and imprinted in the snow were marks indicating long, deadly claws.
Assuming he had stumbled across the tracks of the biggest bear in Ozark history, Collins tirelessly followed the footprints for hours, following the tracks north to Indian Creek and then westward, until he completed a great semi-circle and found himself above the Big North Fork. As he climbed up the north slope of Upper Twin Mountain he heard a noise on the hillside above him. It was a boulder tumbling down the hillside, and Collins jumped out of the path of the enormous rock just in time to save his own life.

As he sheltered himself behind a tree, a second boulder followed, and then a third. The last boulder struck a nearby tree with such tremendous force that it shattered into splinters. The startled hunter peered from behind his shelter and saw something that made the blood in his veins run cold. There, on the hillside, towered a gigantic humanoid figure, stark naked except for an animal skin around its waist. The creature was covered in a tightly curled coat of black hair, so dark that it almost appeared to have a bluish tint in the sunlight. Collins estimated that the creature was at least nine feet in height. The creature was said to be carrying a ten foot long wooden club. 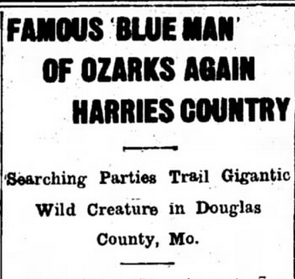 According to Collins, the creature put down the club and picked up another gigantic boulder, which he hurled at Collins with deadly force. The giant then made the hills echo with an ear-splitting scream, more terrifying than anything Collins had ever heard before. Collins, a grizzled veteran of the Civil War, was not a man given to cowardice, but after the monster screamed, he took to his heels and fled for his life.

Upon returning home, Collins gathered several friends and neighbors and spent the following several days tracking down the giant. The posse caught glimpse of the creature time and time again, but the giant sped through the woods with a deftness and speed which the hunters could not match. The hunt continued for nearly three weeks.

In the following days and weeks, the creature was seen by numerous witnesses and its blood-curdling yell was heard by many more. Farmers began noticing that they were missing sheep and pigs, and some of them claimed to have found bloody fragments of their lost animals scattered throughout the woods. Thus was born the legend of the Blue Man.

Sightings were scarce over the next nine years but, in the fall of 1874, word spread throughout the county that the Blue Man had returned. Livestock once again went missing and hunters assembled search parties in a vain attempt to track down the frightening beast. The Blue Man's reign of terror lasted about a week, and then he disappeared as suddenly and mysteriously as before.

In August of 1915, Douglas County once again erupted in a wave of Blue Man sightings. As usual, the creature was said to lurk the hillsides along Big North Fork, Indian and Spring Creeks. However, this time witnesses observed that the creature's blue-black coat was now iron gray, leading locals to believe that the creature did not have much longer to live. "In the course of nature, the Blue Man cannot be expected to live much longer," proclaimed the Moberly Weekly Monitor on August 10, 1915. "Whether he ever will be caught or whether the secret of his long absence and mysterious returns will ever be solved is doubtful".
While Bigfoot sightings throughout the Ozarks continue to the present day, the original boulder-hurling "Blue Man of Spring Creek" seems to have disappeared after 1915. Might this legendary creature have been the father, grandfather, or even great-grandfather of the Bigfoot-like creatures being spotted in the Ozarks today?