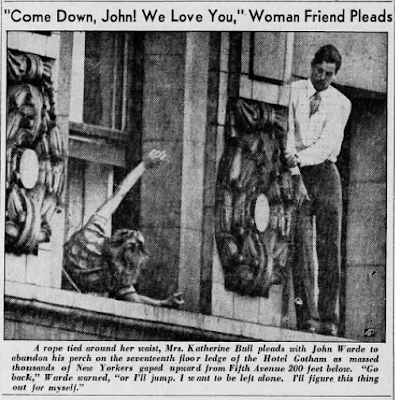 It's impossible to imagine what thoughts were going through John Warde's head as he leaped to his death from the seventeenth floor of the Gotham Hotel on July 27, 1938, but it's safe to assume that he never thought his spectacular demise-- caught on camera by dozens of reporters-- would catapult him to national celebrity. But that's what happened. 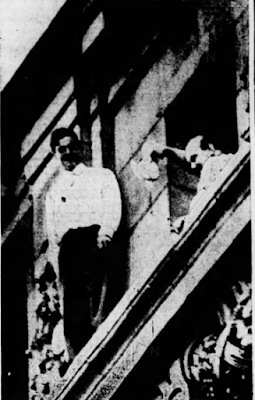 What makes John Warde's death so remarkable is that it occurred during the height of newspaper sensationalism, when fedora-clad photographers went to great lengths to get the shot they wanted, no matter how shocking or distasteful. After all, this was the tail end of the Great Depression and newspapers across the nation were shutting their doors and shuttering their windows. Those who survived lived by the simple mantra: sell newspapers, no matter what it takes. 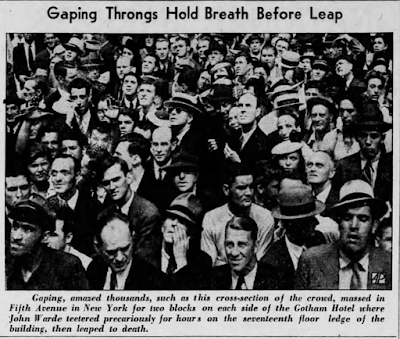 John Warde wasn't the first person to commit suicide by jumping from a New York skyscraper and he certainly wasn't the last. But he was probably the only suicide victim whose entire ordeal, from the ledge to the sidewalk, was caught on camera and distributed en masse for the entire nation to see, in all its gruesome glory.

John William Warde was a 26-year-old unemployed bank teller who endured nearly eleven hours perched on a narrow ledge contemplating his fate. Crowds of thousands gathered around the Gotham Hotel. They watched from the street, from the tops of buses and cars, from the windows and rooftops of neighboring buildings. Some of them called up to the despondent bank teller in an attempt to dissuade him from jumping; others shouted for him to leap. Some cried; others cracked jokes.

"With the coming of night he had become a pale blur as darkness crept up the limestone wall of the Hotel Gotham, Fifth Avenue and Fiftieth Street, a blur sometimes lost in the gloom, sometimes faintly picked out by the spark of a freshly lighted cigarette."

Police commandeered a cargo net they had borrowed from a ship and attempted to hoist it up the building, but all the devices and contraptions the police and fire departments could think of had failed. His mother and sister appealed to Warde from an adjacent window. So did a priest and a several psychiatrists. But it was to no avail. 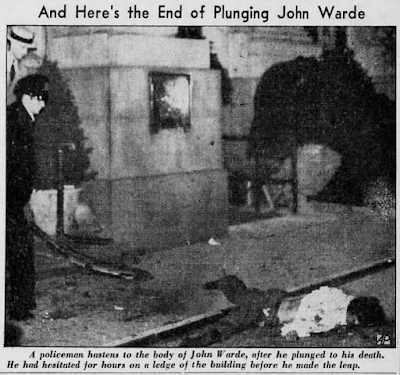 "The pale blur detached itself from the gloom high above. A horrified gasp, then a scream from the crowd, and Warde plunged to his death."

In death, John William Warde obtained the fame he never attained in life. A camera crew filmed his leap, making Warde's death the first televised suicide, while Fox adapted Warde's ordeal into the 1951 film Fourteen Hours, with Richard Basehart playing the role of the despondent bank teller. Of course, the film has a classic Hollywood ending, with Basehart's character grabbing a net to save his life.