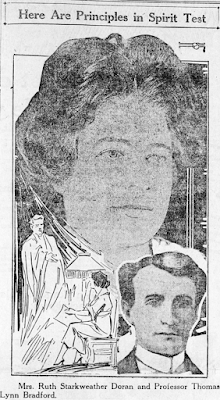 Today marks the ninety-fifth anniversary of the death of one of the most unusual-- and certainly the most committed-- paranormal researchers in history. That man, of course, is Thomas Lynn Bradford, a student of the occult whose name is still remembered today not because of his successful experiments regarding the afterlife, but for his final experiment, in which he committed suicide in order to find out just what happens after we die.

His body was found on Sunday, February 6, 1921, inside a small rented room at 2500 Howard Street in Detroit, in a boarding house owned by Patrick P. Marcotte. The gas had been turned on, suffocating the life out of the forty-eight year old man. Dropped from the hand of the lifeless Bradford were several typewritten pages, the first bearing the title:

"Can the Dead Communicate With the Living?"

Meanwhile, somewhere in the depths of Detroit was a young woman awaiting proof of Professor Bradford's strange theory.

Although his calling card proclaimed him as being a professor, Bradford's training was in the dramatic arts. He was a graduate of Chicago's Columbia College of Oratory, and was known to be a dramatic reciter and impersonator. He was a charismatic and persuasive lecturer; so persuasive, in fact, that he was able to talk himself into taking his own life for science.

The son of a farmer, Thomas Lynn Bradford was born in Detroit, one of seven brothers. He had developed a passion for the supernatural and the occult and soon dedicated himself to solving some of mankind's most curious questions. Shortly before his death, he remarked to Marcotte that he was going to have his body sent to the Michigan Medical Institute. His friend and landlord, however, thought little of the strange comment at the time.

But Marcotte's concern about Bradford began to grow when he discovered that Bradford began running advertisements in local newspapers, seeking those who were interested in participating in an experiment concerning communication with the dead. One of Professor Bradford's advertisements was answered by a young widow from Detroit named Ruth Starkweather Doran.

Mrs. Ruth Doran was so intrigued by the proposition that she visited Bradford at his apartment, where they discussed the subject of life after death. Bradford concluded that there was only one way to solve the mystery. Two minds, properly attuned, must participate in the experiment, and one of these minds had to be willing to make the ultimate sacrifice.

Bradford went to bed early on Friday night, asking Marcotte to tell any visitors that he was out of town and would not return until the next day. Marcote didn't see Bradford at all on Saturday and became cornerned. Around midnight, he and his wife went up to Bradford's room, and were alarmed to discover gas puring from under the door. Marcotte opened the door and discovered his friend and tenant lifeless in bed.

Attention now turned to the partner in Professor Bradford's bold experiment, Ruth Doran. In an interview she granted to newspapers the following day, Mrs. Doran said that she was certain Bradford would communicate a message to her. Doran was at first shocked to hear the news of Bradford's death, and offered to pay for his bural expenses herself rather than to see Bradford's body given to a medical school. Doran stated that she moved to Detroit from Duluth, Minnesota, after the death of her husband and admitted to being a student of theosophy and spiritualism. At the time of her meeting with Bradford, she doubted his sincerity and thought he was merely being dramatic. (2)

Perhaps as a result of the unwanted publicity, Mrs. Doran began to distance herself from Professor Bradford. By the following day she vehemently denied having entered into any agreement with Bradford, even though police had found her name in a letter that was discovered next to his body. Furthermore, Doran denounced Bradford as a cynic and misogynist, and even doubted whether or not he was really a spiritualist at all. When asked by the New-York Tribune if she expected to receive a message from the departed Bradford, she firmly replied, "Certainly not". (3)

She then disclaimed any friendship with Bradford, although she admitted to visiting his apartment at 2500 Howard Street, in response to a newspaper advertisement taken out by one "Professor Flynn" announcing the organization of a class in psychology. "I answered his advertisement through a simple desire to know more about a thing in which I was little versed," Doran told reporters. "I am not a Spiritualist, nor a believer in the psychic." (4)

Strangely, Mrs. Doran's opinion seemed to once again change a week later. On February 12, Mrs. Doran announced that she had a "vague presentiment" that she would hear from the dead professor later that evening. She instructed all like-minded individuals in the city to concentrate on Thomas Lynn Bradford at precisely nine o'clock that evening, to "accelerate the return of his spirit". Spiritualists from throughout Detroit gathered at Ruth Doran's home to await Professor Bradford's message from beyond the grave.

At the appointed hour, just one week after Bradford's death, Mrs. Doran stood in the parlor of her home with three witnesses, all of whom denied believing in the supernatural. The curtains were drawn, and a single lamp dimly illuminated the room. For several moments there was silence. Then Doran spoke.

"I feel a strange presence. I believe it to be the spirit of the professor. A week ago I scoffed at such a thing. I wonder if there are many concentrating their thoughts on this now? I wonder-- "

She then placed her hands on her temples and called for the lamp to be extinguished.

"I hear his voice!" said Doran. "It is faint, but it grows more distinct. It is the professor!"

Doran then demanded a pen and paper and, in short staccato sentences, dictated the professor's message:

"I am the professor who speaks to you from the beyond. I have broken throigh the veil. The help of the living has greatly assisted me. I simply went to sleep. I woke up and at first did not realize that I had passed on. I find no great change apparent. I expected things to be much different. They are not. Human forms are retained in outline but not in the physical.

"I have traveled far. I am still much in the darkness. I see many persons. They appear natural. There is a lightness of responsibility here unlike in life. One feels full of rapture and happiness. Persons of like nature associate. I am associated with other investigators. I do not repent my act.

"My present plane is but the first series. I am still investigating the future planes regarding which we in this plane are as ignorant as are earthly beings of the life just beyond human life."

Ruth Doran then affixed her signature to the message to vouch for its authenticity. According to those present at the seance, she then fainted, but was soon revived. After regaining consciousness, she was asked, "Are you certain, beyond doubt, that you heard from Bradford?"

"I am convinced," replied the widow. "I never heard a spirit voice before. That was the professor, without doubt." (4)

Ruth Doran then became a celebrity of sorts, claiming to receive messages from Bradford daily. "The spirit of Professor Thomas Lynn Bradford visits me constantly," she told curious reporters in late March of 1921. "The man who killed himself so as to be able to prove that the physically dead can talk with the physically alive has revealed to me many wonders of the spirit world." (5)

The messages Mrs. Doran received from Bradford in 1921 were published in newspapers throughout the United States, eventually crossing oceans and attracting the attention of Sir Arthur Conan Doyle, who believed them to be authentic. Some of the messages include:

"Through spiritism the world will be reclaimed; sin will be vanquished, suffering will end. The physical in man will cease to be and physical death- and that is the only death- will be no more. Men will live on earth forever, even as they live forever in the spirit world."

"When men no longer idolize the material and honor the spiritual the troubles of earth will cease. When men realize that they can be guided and helped from the beyond their troubles will cease to be."

"As I have said before, the outlines of the human form are retained here, but not the physical. Men and women wear raiment such as they wore on earth, that is, astral clothing which, to us, has all the realness of material garb. Spirit bodies of men wear evening dress, even as their earthly bodies did in physical life. Spirits of women wear the kinds of hats that suited their earthly natures."

"There is no time or space here, as known on earth. There are spirits here from Mars and other planets."