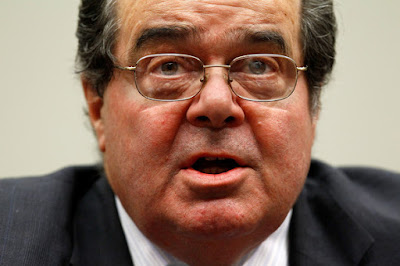 The recent death of conservative icon and Supreme Court Justice Antonin Scalia seems tailor made for conspiracy theorists, especially ones with an axe to grind against President Obama. After all, Scalia represented the crucial tie-breaking vote in notable SCOTUS decisions past, present and future. In terms of ideology, he was the right-wing yin to Obama's left-wing yang. With the sudden and unexpected death of the 79-year-old jurist during Obama's last full year of the presidency, now paired with the very real possibility of a new Supreme Court justice who may tip the scales in favor of liberalism, Scalia just may be the best thing to happen to conspiracy theory since Adam Lanza. Maybe even better.

For starters, there's a perfect foundation for conspiracy: No autopsy was performed on Scalia, and Presidio County Judge Cinderela Guevara pronounced Scalia dead of natural causes by telephone-- without seeing the body. In a statement issued on Sunday, February 14, the U.S. Marshals Service said that Scalia had declined a security detail while at the ranch. Scalia's son was expected to accompany him on the trip to Cibolo Creek Ranch, but backed out suddenly without explanation.

And, of course, there were the rumors that Antonin Scalia was found by ranch owner and Texas billionaire John Poindexter with a pillow over his head.

Yes, it's enough to get any conspiracy theorist's juices flowing.

As for the possibility of smothering, this seems far-fetched. Even novice police officers are able to identify the tell-tale physical signs of asphyxiation (which, for instance, is how we proved that Sandra Bland was not murdered, as some conspiracy theorists believe). Reports also indicated that Scalia was clothed in clean, unwrinkled pajamas. I don't know about you, but if someone was trying to smother me with a pillow, I'd do enough twisting and writhing to get myself quite wrinkled. Hell, I might even soil myself.

Of course, the death-by-smothering theory could be correct if Scalia had been drugged first, and thus unable to fight off the attack. The remote 30,000-acre expanse of the Chinati Mountains provides habitat for numerous medicinal plants whose effects can be deadly. It is the home of plants like oleander and lily of the valley, which can cause cardiac arrest in humans. If I wanted Antonin Scalia out of the way, I'd brew him a tea or serve him a meal with medicinal plants, roots or mushrooms that would render him unconscious, before changing him into clean unwrinkled pajamas (to make his death look natural), and then finish the deed by smothering the unconscious victim with a pillow. Knowing that it would be a royal pain in the ass to get anyone to investigate on a long holiday weekend (Sunday being Valentine's Day and Monday being President's Day) I'd feel quite confident in getting away with murder. If authorities wouldn't even call for an autopsy, I'm likely to believe they would never think to test for oleander poisoning.

So, yes, I suppose the death-by-smothering possibility could be possible. There's just one wrinkle in that plan: Ranch owner John Poindexter later clarified that the pillow wasn't quite "over" Scalia's head. It was somewhat above his head, between the top of the dead jurist's head and the headboard. It most definitely was not in the position many conspiracy theorists claim it was-- directly over his face.

However, one truly begins to salivate over the possibility of murder when one examines the man behind the Cibolo Creek Ranch, the Vietnam veteran-turned-Wall Street investment broker John Poindexter.

Poindexter's company, which specializes in leveraged buyouts of manufacturing businesses, earned him so much wealth that he was able to purchase 46,000 acres of Big Bend Ranch State Park from the Texas Parks and Wildlife Department-- for the paltry amount of around $2 million. The negotiations between Poindexter and the TPWD were held in secret, thus drawing the ire of conservationists, who couldn't help but wonder how Poindexter managed to buy roughly 1/6th of one of Texas' largest parks for pennies on the dollar.

Conservationists were also aghast at his "improvements" to the land, which were largely conducted with pesticides and bulldozers. The widow of one former director of the Texas Historical Commission testified that her husband and a team of archaeologists had witnessed significant damage to valuable archaeological sites at Cibolo caused by Poindexter's bulldozers.

Yet, in spite of his mistreatment of the land, Poindexter was somehow rewarded with a prestigious "stewardship" award handed out by the state of Texas. Yes, even though Poindexter constructed a 5,300-foot airstrip on his ranch, he is still regarded by many Texans as some sort of environmental hero.

Hmm. If Obama really wanted Scalia out of the way, you couldn't really pick out a better place than a vast wilderness ranch with its own airstrip, or a better time than a holiday weekend. Reports indicate that the extended holiday weekend resulted in a slower-than-molasses response by law enforcement, and may have contributed to Guevara's decision to confirm Scalia's death via telephone. It would have afforded ample time for the assassin to make a clean getaway; by the time the local authorities arrived, a private jet helmed by a CIA assassin could've flown all the way from Texas back to Washington D.C. All without the prying eyes of a security detail.

Oh. And there's one more interesting thing about John Poindexter. He was a big-time donor to the Democrat party, at least according to DCwhispers.com.

I still happen to believe that Antonin Scalia died a natural death, but, you gotta admit, this case has all the ingredients for a gourmet conspiracy meal.