The Lady in Black

on February 24, 2016
When a black apparition appeared in Cleveland in the fall of 1899, death followed in its wake. 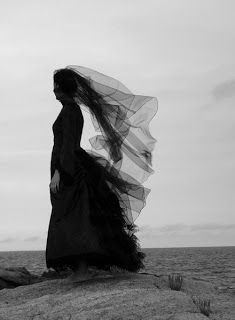 The following hair-raising story appeared in the December 3, 1899 edition of the St. Louis Post-Dispatch:


CLEVELAND, O., Dec. 2.-- Who is "The Black Lady"? That is the question which worries Mrs. Mary Corley, who lives at 22 Old River street.

Each time Mrs. Corley saw The Black Lady she threw up her hands and screamed and she fell in a faint. Mrs. Corley is unable to explain the strange phenomenon, according to the story she told her friend. The features of the apparition, or whatever it may be, can be plainly seen by Mrs. Corley, although she cannot remember the face as resembling that of any friend who had died.

On each occasion the figure appeared at the same window of her home on Old River street. The window opens into a sitting room which is now but little used on account of this fact. Mrs. Corley is deathly afraid of The Black Lady and would not go into the room alone for the world.

The figure is described as being dressed in solid black and always in the same costume. A hood is worn over the head and her eyes are black and piercing in their intensity. Mrs. Corley says the figure has a sallow complexion (so pronounces as to give the figure a deathlike appearance). The "woman" looks into the window and the moment Mrs. Corley looks in that direction is disappears.

Patrick Riley, who died Sept. 16, left an estate of about $50,000. Last summer he took his daughter, Mrs. Corley, to Europe. A few days after their return Mrs. Corley claims she saw "The Black lady" looking into the window. She went to a well-known undertaker who is a friend of the family and told him, it is said, that he would soon be needed by the family.

"Why?" asked the undertaker.

At that time Patrick Riley was apparently in good health. About a week later he was taken suddenly ill and died in a few days. Mov. 7 Mrs. Corley sent for the undertaker to settle up some business matters.

"I suppose you will be needed again soon," said Mrs. Corley to the undertaker. In response to a question Mrs. Corley replied: "I have seen The Black Lady again". At that time Mrs. Corley's husband was enjoying good health. Three days later he died.

Mrs. Corley is not naturally superstitious. She is a strong, healthy woman, about 30 years of age. She enjoys robust health. A reporter called on Mrs. Corley at the home of her uncle, Councilman M. Riley, on Washington street. Miss Riley, a daughter of Councilman Riley and a teacher in the Detroit Street School, received him.

"It's all due to her nerves," said Miss Riley. "Such things don't bother me, because I never had any nerves."

Mrs. Corley was finally persuaded to come into the room, but she firmly refused to discuss the matter at all. She declared that she did not care to have the matter get into the newspapers. She did not deny that she had seen the figure, which she called "The Black Lady", but she refused to say anything about the matter.

While Mrs. Corley declined to say anything for publication with reference to the strange apparition, the story has been told to several friends of the family. Mrs. Corley is in deadly fear of the visitant. On bothe occasions when she says she saw the woman at the window Mrs. Corley fainted. She never goes into the sitting room along after night. She does not believe in things supernatural. She declares she saw the face and figure if a woman clearly outlined. Each time she predicted a death in the family would follow. Her prediction came true in both instances.
black eyed people ghosts Ohio premonitions Strange History unexplained