The Legend of Chester Bedell's Grave

on February 09, 2016
Ohio atheist challenges God, but did God have the last laugh? 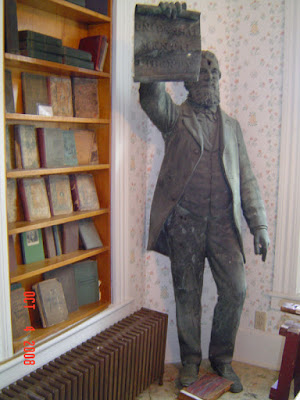 A century ago, the grave of a wealthy farmer from the tiny village of North Benton was one of the most popular tourist attractions in the state of Ohio. Visitors to the grave of Chester Bedell would gather in droves to gaze upon the lifelike bronze statue "Chet" had commissioned before his death in 1908. Stern and commanding, the statue held in its upraised hand a scroll bearing the words "Universal Mental Liberty", while Bedell's left foot trampled another scroll, labeled "Superstition". When they were done gazing upon the bronze likeness of Chester Bedell, visitors would then keep their eyes peeled for a snake. Or two. Or a dozen.

Hartzell Cemetery: Come for the Statue, Stay for the Snakes!

Cantankerous and ornery, Chester Bedell was an outspoken atheist who scoffed at religion and delighted in debating his position. He could quote Scripture better than most preachers and, in spite of his beliefs, ministers from all over Deerfield Township would visit Bedell and discuss theology. Bedell, who was the wealthiest man in North Benton, usually got the better of these visiting preachers. While few ministers could best him in theological debate, all seemed to have a certain kind of respect for old Chet.

Chester Bedell died at the age of 81 in 1908 from a massive stroke. But before he passed, he made a bold statement-- one that would catapult him to regional fame:

"If there be a God or any truth in the Bible, let my body be infested with snakes."

As it turned out, that's exactly what happened.

Those who still tell the legend of Chet Bedell insist that no snakes were ever noticed at Hartzell Cemetery prior to his bold declaration. But nearly everyone who visited the old atheist's grave agreed that, from the day old Chet was laid to rest, snakes and reptiles descended upon the country graveyard like locusts upon Egypt. Garter snakes, green snakes, blue racers and blacksnakes slithered through the grass and climbed over the headstones, turning Hartzell Cemetery into a tourist hotspot.

In his letter published in the Pentecostal Quarterly in 1931, Reverend E.P. Lehman of Franklin, Pennsylvania, wrote of his visit to the atheist's grave. He was told by the cemetery sexton that he killed as many as twenty snakes in a single day. Lehman further described the cemetery as being strewn with reptile skins.

Rev. Gerald Winrod, of Wichita, also visited Bedell's grave in the 1930s and counted six snakes. His companion, Mr. E.E. Flowers, killed one of the serpents, while Winrod photographed another. 'We took other pictures. The sexton told us he had killed four that morning, has killed as high as 20 in a single day. Finally he said, 'I don't know, maybe the Lord did have something to do with it.' '' wrote Winrod.

But some say that there was a logical explanation for the infestation-- hoaxery.

In the early 1930s, an enterprising restauranteur from North Benton claims that he paid local children to catch snakes and place them in the cemetery. He then printed up postcards and sold them to tourists. Other locals came forward and claimed that they had been paid to "infest" Bedell's grave with snakes.

Of course, this doesn't exactly rule out Divine Intervention. After all, Chet Bedell didn't specify whether or not the snake infestation had te be a natural occurrence. They do say that God works in mysterious ways, and maybe part of His divine plan was to work through hoaxers. No matter how you look at it, the fact remains that the old atheist's grave did indeed become infested with snakes.

At any rate, the bronze statue became the target of vandals and Bedell's heirs removed the statue and placed it into storage in the early 1950s. It was later donated to the Berlin Center Historical Society and can still be seen today, fully restored to its original grandeur, at the historical society's Weidenmier House. Bedell's grave, which was relocated in the 1940s to make way for the Berlin Reservoir, can still be seen at the Hartzell Cemetery.