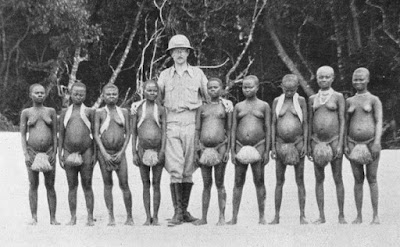 In April of last year we published an article about an ancient race of pygmies that once inhabited America. Archaeological evidence supporting this theory was championed by several leading researchers of the 19th century such as Joseph Henry, who served as the first Secretary of the Smithsonian Institution, and John Haywood, the renowned Tennessee historian and lawyer. These men pointed to the amazing discoveries unearthed near the central Tennessee town of Sparta in 1820, when several adult human skeletons-- approximately two feet in length-- were unearthed during an excavation. Astonished by this discovery, Henry sent his own team of Smithsonian archaeologists to Sparta, where, on October 7, 1876, they unearthed a 26-inch long skeleton of an adult male.

We recently decided to follow up on this strange race of American pygmies and came across other interesting finds which offer further proof of this mysterious tribe.

In 1896, a farmer from Waynesburg, Pennsylvania, named John Lupping made an extraordinary discovery while plowing his fields. The following report appeared in the Leader-Democrat (Springfield, MO) on May 29, 1896:

A RACE OF PIGMIES

Dispatches received here from Williamsport, Pa., announce that John Lupping, a farmer living near Waynesburg, has unearthed what are undoubtedly the skeletons of a race of pigmies. He was plowing up an old orchard. The stones that cover the graves are about 10 inches under the ground, and are the only stones found in the field.

Two days ago a party of men went to the field and opened several of the graves. The first one was covered by a stone two feet wide and three feet long. The vault measured 18 inches in widthm 2 feet in length and none inches in depth.

The second grave contained the skeleton of a child. It was about six inches in length, and a small finger ring could be slipped over the femur bone, which was not more than an inch in length.

Other graves will be opened and first perfect skeleton discovered will be sent to the Smithsonian Institution. Everything in the neighborhood indicates that his burial ground is near a townsite of prehistoric people. Pieces of broken pottery, clay, flint implements, etc. are found in large numbers. In every instance the face of the skeleton has been found turned toward the east and the body is in a cramped, doubled-up position.

In October of 1899, construction workers digging on King Hill in northwestern Missouri uncovered a prehistoric graveyard, containing bones of both giants and dwarves. The following account of the discovery appeared in the Massachusetts newspaper, the North Adams Transcript, on October 24, 1899:

Workmen terracing King hill, an old landmark of northwestern Missouri, which is to be converted into a residence suburb of St. Joseph, have unearthed a prehistoric cemetery. The remains of a race of dwarfs not allied with any tribe known to have inhabited this territory and unaccounted for by Indian legendary repose on the summit of King hill, which rises abruptly from the Missouri river bottom to a height of 600 feet at a point just north and distant about 300 yards from the packing house district and stockyards of South St. Joseph.

A feature remarkable in itself and especially marked in connection with the dwarfish remnants of prehistoric man found in this summit is the discovery of human bones, evidently those of a giant, probably more than seven feet tall and big boned, says the Chicago Record.

Low, flat heels, with small intelligence and marked animal propensities characterized this people. Heavy jaws and strong, well preserved teeth carry the record of their lives forward. Brutes, human, but inhumane, self reliant, they were savages of a lower order than any we know today. Yet they honored their dead. Shells such as are found on the banks of many inland streets, plentiful on the sand bars of the Missouri overlooked by King hill and stones of unusual hues, worthless in the commercial marts of today, the playthings of children, were deposited in the graves, collections gathered in loving tribute to the memory of those unknown, even in race, to the historians of today.

The ravage which time has wrought has left but fragmentary parts of the skeleton, which crumble into ashes upon exposure and handling. The big plow and the scrapers, with the trampling of horses, usually crush the brittle forms until it is difficult to restore them to human semblance. One of the plows recently overturned a bunch of human hair, which, however, fell to pieces upon being handled. As preserved, it presents the unmistakable evidences of hair from the head of a human being, although much of it has fallen into fine powder.


Similar discoveries occurred well into the 20th century, from the gravel pits of South Dakota to the tar pits of California. The following article was published in the Wilkes-Barre Record (PA) on August 5, 1907, and describes a pygmy burial ground discovered in South Dakota:

Oacoma, S.D., Aug. 4-- A remarkable prehistoric burying ground has been cut into by railroad graders east of here and the remains of what appears to be a pigmy race have been discovered. The burying ground is now a great deposit of gravel, and it is in this that the bones are found. In the neighborhood of fifty skeletons so far have been unearthed. These are of a race of dwarfs about four feet tall, and physicians have pronounced them the remains of adults, not children. The burials took place with the bodies standing or sitting, not lying down.

One of the skeletons is that of a giant more than eight feet high. Near this skeleton were found a number of copper implements, as well as several of bone. In one of the graves were two copper idols about eight inches tall. The University of South Dakota is expected to send an archaeologist to investigate the finds.

In 1912, Professor Farnsworth of the British Museum, along with Professor Yakishi of the Imperial University of Tokyo, were exploring the famed Florissant fossil fields when they discovered evidence of a similar race. From the Indianapolis News on July 18, 1912:

Colorado Springs, Colo., July 18.-- Evidences that Colorado was inhabited by a race of human pigmies, not easily distinguished from apes, have been discovered by Professor Farnsworth, of the British museum, and Professor Yakishi, of the Imperial University of Tokio. The bones are so small that they could not have belonged to a person over three or four feet in height.


Less than two years later another remarkable discovery was made at the asphalt beds of La Brea in California. A pygmy skeleton, believed to be approximately 200,000 years old, was unearthed and sent to the Smithsonian. From the February 12, 1914, edition of the Nevada State Journal:

Los Angeles, Cal., Feb. 11.-- The skeleton of what appears to have been a prehistoric pigmy, less than three feet in height, is on its way today from the asphalt beds of La Brea to the Smithsonian Institution in Washington. If the genuineness of the find is verified there, the La Brea skeleton will take place in the history of anthropology as the first remains of antedeluvian men found on the North American continent.

"To my mind," said Director Frank Daggett of the Museum of History, Science and Art, under whose direction the excavations have been carried on, "there can be no doubt that these bones are those of a man. To what geological period he belonged must be a matter of conjecture. Only very careful researches yet to be made can determine the truth."

Indications are that the skeleton belongs to the pleistocene period, roughly placed at 200,000 years ago. First was found the skull, last Friday. Since then the remainder of the skeleton, said to be in an excellent state of preservation, have been scraped from their casing of asphalt with the most minute and painstaking care.
Nearby was the trunk, still erect, of a tree, the summit of which was overlaid by 20 feet of asphalt. Close to the tree trunk were the bones of a mammoth bear, of a species already classified as belonging to the pleistocene period.

Scientists of the University of California have contended that North America and Asia were at one time joined and that, geolocially speaking, the backbone of the continent is the Aleutian islands. Across this neck of land, they believe, came the Eohippus, the little two-toes progenitor of the domestic horse. The find at LaBrea, if it proves what it seems, will strengthen their contention that there since was an interchange of life between two continents.

So who were these ancient people? Where did they come from? And what caused them to die out? While the answers to these questions remain unsolved, there is enough credible evidence to prove that they did indeed exist.