Can ghosts from the future haunt the present? 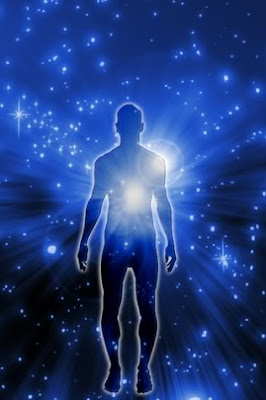 From quantum physicists and parapsychologists to philosophers and ordinary people, there are many who refuse to accept the linear concept of time. To these individuals, the past, present and future are all the same, taking place concurrently within a single moment of existence. In other words, these individuals believe that the past is never really past, but happening as we speak, and will continue to happen for all eternity. Thus, the future has already happened, and will continue to happen, in this very moment, which lasts forever.

Many have attempted to explain paranormal phenomena using the theory of non-linear time, speculating that most hauntings are not interactive experiences but rather energy imprints left behind by a deceased person. Even though the dead soul of the deceased may not even be aware that his or her ghost still haunts the earthly realm, the imprint continues to appear over and over again, trapped in time and playing in a continuous loop, until it is vanquished or set free by some parapsychologist, clergyman or medium. Some people who share this point of view claim that the existence of such ghostly "residue" proves that time is not linear, and that it does not flow like a river from point A to point B, but recirculates like the water spouting from a fountain. In fact, this seems to be the main current of paranormal thought rather than an oddball theory. After all, it gives us comfort to believe that time, along with the spirit itself, is infinite and eternal.

And, yet, there is something obviously and patently wrong with this theory of non-linear time.

If we accept that the past continues to happen in the present (as repetitive hauntings seem to suggest) and that the present will presumably continue to happen in the future, then, as a rule, we must also accept that the future has already happened. But this couldn't possibly be the case-- otherwise, we would be haunted not just by the ghosts and apparitions of people who have long since died, but also by ghosts and apparitions of of those who have not yet been born!

Think about it. If time is not a fixed position, then Joe Smith, who will be born in 2020 and die in 2090, has already died. In fact, he would have died an eternity ago. So why, then, do we only see ghosts clad in outdated clothing, or ghosts of people who died in the past (by "past", I'm referring, of course, to our commonly perceived notion of the past)?

Out of the millions of documented ghost sightings which have taken place in every corner of the world throughout history, there has never been a documented sighting of a ghost from the future. Nobody who was alive in 1952 ever saw the ghost of a young woman in yoga pants who died at the age of 19 in 2018 (which, if you believe in the concept of non-linear time, should have already happened). Nobody who was alive in 1889 was ever haunted by the spectre of a flapper from the 1920s.

This overlooked detail proves that time is indeed fixed and linear.

One could attempt to argue that maybe, just maybe, certain unexplained phenomena are the "ghosts from the future".  Take shadow beings, for example. Many believe that these dark featureless phantoms are interdimensional beings; but if you believe that time is a dimension, then it could be argued that shadow beings are capable of crossing the barrier of time-- perhaps even capable of traveling backwards in time. Yes, it is possible that shadow beings are the ghosts of people who have not yet died because they have not yet been born (even though the concept of non-linear time tells us that they have already lived and died, since the future has already happened).

If entities like shadow beings are the ghosts of the not-yet-born, then how does the present (which has simultaneously already happened and is still waiting to happen) figure into the picture? If time is indeed non-linear, then those of us who are living right now have already died (because we died in the future, which has already happened). And if we have already died, then where are our own ghosts?

Maybe doppelgangers are the ghosts of the living?

That would be a strange theory, but an even stranger one might be that we, who are presently alive, might very well be our own ghosts who are haunting those who are presently living in the future (which has already happened anyway).

Let's suppose that, right now at this very moment, you are walking down the street, wearing the latest fashions. Based on the concept of non-linear time, it is also conceivable that, also at this very moment, somebody from the year 2656 is walking past you on the very same street. You view this person as a black, featureless blob (a shadow person), while the living being in 2656 sees you as an old-time ghost, wearing the outlandish, outdated, ridiculous clothing of 2016.

For all we know, this just might be the case.