My Strangest Experience: The Haunted Piano 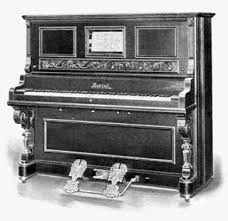 Today's installment of "My Strangest Experience" comes to us from Emily Burkholder of Moorcroft, Wyoming. She admits that the story you are about to read was told to her by her mother, Nedra Washburn, when Emily was a college student. Although Emily states that she cannot authenticate the story (the incident took place a month before Emily was born), she has no doubt about her mother's honesty or sincerity.

The following story, which took place in 1978, is in Emily's own words.

I never knew my father, who deserted Mom when he discovered that she was pregnant. In those days, illegitimate children were something to be ashamed of, and so Mom moved away from Ann Arbor, Michigan-- where she had been born and raised-- and began a new life for herself in Wyoming, where she rented a tiny house from Uncle Artie, who resided in Gillette with Mom's sister, Georgette.

It was an old house, I guess you could say, though not terribly old. It was pale yellow, one story, with one large bedroom, one extremely small bedroom, a kitchen, bathroom, and a modest living room. I believe Uncle Artie told me once that the house was built in the late 1920s or early 1930s and that he had purchased it for a song sometime around 1966 from the railroad, who had been using it as an office of some sort. But nothing strange or unusual ever happened in that house until the summer of 1978, when Mom decided to buy a used piano.

It was on old player piano. Mom saw an ad for it in the local paper and decided to buy it. I think she paid $20 for it, and it was delivered to her house in the back of a pickup truck by the seller, who said that it had originally belonged to a bordello in Laramie in the 19th century. There was an ugly furrow gouged out of the left side, which, according to the seller, was supposedly the result of a bullet fired by a drunken cowboy sometime around 1912.

My mother had no musical talents whatsoever, by the way. She once told me that the only reason she bought the piano was because she couldn't afford any real living room furniture, and she thought the cheap piano would take up a lot of space and make the house appear less empty. She also liked the sound of piano music and, much to her delight, the piano came with a box of a dozen or so scrolls, each one containing three or four different songs. The scrolls were made of a thick paper material with perforations, and the piano would "read" each hole in the paper and produce a note. The seller showed Mom how to insert the scrolls and how to get the piano to play. Mom listened to the same handful of scrolls hundreds of times,m until she knew every note of every song by heart. Pregnant and single, without a steady income or a radio or television, the player piano was her only source of entertainment.

Mom had gotten hired as a part-time server at a local restaurant, and she would listen to the piano for about an hour each evening when she came home from work, as she soaked her sore, swollen feet in a basin of hot water and epsom salt. It was her nightly ritual, she said.

One night, as she was soaking her feet on the living room sofa, she fell asleep, but was suddenly awakened by a beautiful melody, one that she did not recognize. Even though the scroll she had put into the piano was one she had listened to countless times before, the song emanating from the piano was one she had never heard before. She thought little of it, however, figuring that there must have been an extra song on the scroll that someone, perhaps the manufacturer, had forgotten to print on the label. She assumed that the reason she never heard the song before was because she always removed the scroll after the third song, unaware that there was another tune remaining to be played. At the completion of the beautiful melody she removed the scroll and inserted another, and then she went into the kitchen to prepare dinner for herself.

She hummed along to the familiar tunes in their familiar sequence, but she nearly jumped out of her skin when the third song began. The song should've been "Buffalo Gals", but instead of that upbeat, lively tune, the piano began to play the same strange, lovely melody that had roused her from her nap not more than an hour before.

Mom spent the rest of the evening examining each scroll, looking for the smallest detail she may have missed, but nothing appeared out of the ordinary. She could not find the name of the unfamiliar song on any of the scrolls or labels, nor could she find the title written on the dusty wooden box in which the scrolls had been kept. The incident was slightly unsettling, so Mom avoided the piano for a few days, but then she went back to her nightly routine of playing the scrolls and she swears that, after that one evening, she never heard the piano play that lovely song again. The incident soon faded from her memory, and was eventually forgotten.

About three months later, just a couple weeks before I was born, Uncle Artie and Aunt Georgette invited Mom over for Sunday dinner, which they did every Sunday since my mother had arrived in Wyoming. After they had eaten, they retired to the living room to watch television. As was their normal routine, Uncle Artie turned the dial to The Lawrence Welk Show, while Aunt Georgette put on the coffee and sliced up a pie. Sometimes it was a coffee cake or an angel food cake, but Mom distinctly recalls having cherry pie that day, because just as she put a forkful into her mouth, she heard that same beautiful song the piano had played on its own accord three months earlier! The song was being performed by a duo on The Lawrence Welk Show, and she listened attentively, but must have missed the introduction.

"Artie, what was the name of that song?" she asked.

"The one that just ended? Why, that was 'Waltzing Matilda'", said Uncle Artie. He explained that it was a very popular traditional ballad from Australia. In fact, he told her that it was kind of like the unofficial national anthem, sort of like the Australian equivalent of "Yankee Doodle" or "America the Beautiful".

A couple of days later, Mom tracked down the man who had sold her the piano. She was desperate to learn more about the piano's history and where it had come from. Unfortunately, the seller didn't know very much and all of Mom's leads turned out to be dead ends-- for the piano was made in Boston out of a North American species of wood and the scrolls had been manufactured in New Jersey. She then turned her attention to the brothel. She visited library after library and scoured old newspapers. Finally, she hit paydirt.

As it turned out, at least according to my mother, back in 1912 a young cowboy with a reputation as a show-off was attempting to shoot a cigar from the mouth of a friend who was sitting on the piano's bench at the frontier bordello. The trick shot, to the delight of the dozens of patrons and prostitutes who had gathered to view the spectacle, was a success. However, the cowboy's aim was off by a hair, and instead of lodging itself into a bale of hay that had been positioned in front of the brick wall, the bullet grazed the side of the piano, causing it to alter its course. It ricocheted off a brass spittoon next to the hay bale and lodged itself into the breast of one of the prostitutes who had gathered in the saloon to view the sharpshooting exhibition. A doctor was called, but he lived five or six miles away, and the young woman succumbed to her injury before had arrived.

The unfortunate woman? The newspaper identified her as a nineteen-year-old girl who, just one year earlier, had emigrated to America with her grandfather-- aboard a steamer from Australia.


If you'd like your story to be considered for a future installment of "My Strangest Experience", include your story in the body of an email (no attachments please) and send it to annanewburg@yahoo.com.
ghost stories