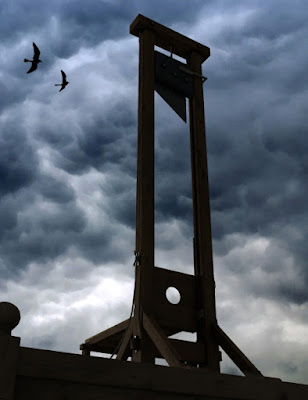 Ever since the first decapitation, mankind has universally wondered what goes on inside the heads of the headless after their heads have been beheaded. Can decapitated heads speak? Or think? Or feel pain? The topic of "post mortem intelligence" has been debated among physicians and philosophers for centuries; as a result, history has provided us with a remarkable record of instances of decapitated heads performing all kinds of marvelous feats.

As fate (and the guillotine) would have it, many of these records come from France, where all manners of scientific experiments were performed upon the heads of executed criminals. Since executions were performed by beheading, there was no shortage of subjects. In 1894, right before French priest Albert Bruneau was executed for the murder of another priest in the village of Laval, a scientist named Monsieur Dominique visited Bruneau in his cell and convinced him to take part in an experiment. The men agreed that Bruneau would attempt to communicate with Dominique by way of a pre-arranged signal the moment after Bruneau felt the blade of justice on his neck. "When I lifted his head from the basket," stated Dominique, "doing it so quickly that even the sawdust had no opportunity to attach itself to the bloody neck, the eyes were wide open and looking at me with every appearance of intelligence and understanding." He then shouted at the severed head to give the signal, which was the winking of the left eye.

"As I uttered those words," continued Dominique,"the eyelid of the left eye drooped spasmodically and raised again. I hesitated a second and repeated my words, but there was no motion, and I exclaimed, 'For God's sake, reply again!'. There was a quivering in the eyelid and the lashes seemed to waver as though stirred by the wind, but there was no motion." Monsieur Dominique speculated that, if consciousness remained within the decapitated head, it had passed after six seconds.


In 1887, the Italian murderer Pranzini was executed by decapitation. Physicians attempted to rescuscitate the killer's head and torso by rushing the corpse into an operating room and applying powerful electrical current to its nerve centers. The experiment, of course, failed.

These experiments were performed, in part, because of several myths and legends that have perservered throughout the ages. In the thirteenth century, Conradin of Swabia and Frederick of Baden were executed in Naples after the two princes invaded the kingdom and were captured by Charles of Anjou. Prince Frederick was the first to be executed and, as his head fell, several spectators gasped as his lips cried out "Maria! Maria!" Conradin, in awe of what he had just seen, picked up Frederick's head, kissing it and pressing it to his breast as he awaited his own beheading. Ellis' Letters of English History records that, in the sixteenth century, after the beheading of Mary, Queen of Scots, the queen's lips "stirred up and downe a quarter of an hower after her head was cut off".

During the early seventeenth century, a criminal named Sprot was accused of taking part in Scotland's Gowrie Conspiracy (which involved a plot to kidnap King James). Sprot was hanged, but before his execution he stated that he would give a sign to prove his innocence. It was reported that after Sprot's body was cut down from the scaffold, it clapped its hands together three times.

Perhaps the most intriguing example of post mortem intelligence can be found in the case of the Austrian bandit named Schaumburg who, along with four companions, was sentenced to death in 1680. According to the official report of the chief of police, Schaumburg's final request was that his companions should be placed in front of him, in a straight line, several feet apart. He asked that the lives of his friends should be spared under a very strange condition: After Schaumburg's head had fallen to the ground, his body would walk past each comrade in turn. The judge agreed that if such a miracle should happen, then he would grant clemency to the four condemned friends. The execution proceeded and Schaumburg kneeled before the executioner. After his head had fallen to the ground, the bandit stood up straight and walked up to his four friends, each one in turn, before his own body finally fell to the ground. The judge immediately granted amnesty to the four men.