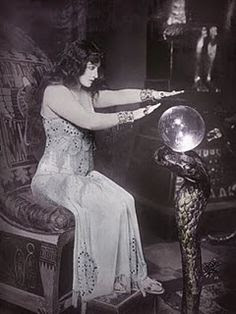 From the late 19th to early 20th centuries, people from all over the world were enamored with all things paranormal. This insatiable hunger for occult knowledge and thirst for the unknown gave rise to Spiritualism, Theosophy and a host of other religio-philosophic movements. As a result, newspapers from Boston to Tulsa to San Francisco (and all points in between) were flooded with ads for psychics, mediums, palmists and clairvoyants.

While most of these esoteric practitioners were flat-out frauds and hucksters looking to cash in on the paranormal craze of the times, their advertisements make for entertaining reading even today. Here are some of the better ones we've been able to uncover.


If only somebody had the foresight to stage a "World's Greatest Clairvoyant" competition, then perhaps newspapers of the era wouldn't have featured thousands of ads by psychics all claiming to hold the same title, such as Prof. W.J. Martin. According to his ad, the Professor is said to be "recognized by the press". However, thorough research has failed to turn up any mention of this self-described "brilliant star of his profession". And what's with the 45 Years in St. Louis claim in the headline? Our guess is that this statement was intended to convey: "Hey, unlike many of the other quacks claiming to be psychic, nobody has attempted to run me out of town yet, so I must be the real thing!"


St. Louis was also home to Madame Martell, the "world's most noted clairvoyant" (obviously, the world's greatest clairvoyant title was already taken by the fellow above. And, much like Prof. Martin, Madame M. Martell also wanted to let readers know that she wasn't operating a fly-by-night scam; her ad states: Remember, Madame Martell is permanently located. Take that, you sneaky gypsies!

When all others fail, see Leon. Why? Because he's been a resident of Chicago for five years, that's why. Best of all, he can "diagnose diseases of all descriptions". Sounds like money well spent to us.


Prof. H. Best of Leavenworth, Kansas, was a con artist of the highest order. Two weeks after placing this ad, the esteemed "professor" was arrested for swindling a young man named Arthur Moorehead out of $165-- a substantial sum of money in those days. The clairvoyant was released from jail after he agreed to return the money to Moorehead. Unfortunately, the young man never stopped to wonder, "Gee, what is the sitting president of the New York Occult Society doing in Kansas?" (Not surprisingly, our crack team of researchers could find no evidence that this organization ever existed. It also appears that Professor Best arrived and departed from Leavenworth in September of 1903, never to be heard from again... at least not under the same name).


At one time, the nation's capital boasted more psychics than any other city in the United States. Although history doesn't provide much information about Prof. Leon DeVoux, we think it's safe to assume he was a fraud. After all, there aren't many native Hindus named Leon.

When a clairvoyant advertises that he is the cheapest (and is based out of a hotel to boot), there's a pretty good chance that he's a fraud.

At various times throughout his illustrious career as a scammer, Karnovah operated in Illinois, Wisconsin, California, South Dakota and Washington, D.C., where he claimed to have told the fortunes of presidents Roosevelt, McKinley, Harrison and Cleveland. The infamous Karnovah seldom stayed in one location for more than a year-- a tell-tale sign of a fraudulent psychic. In 1902, a San Francisco judge issued a warrant for the arrest of Karnovah on a charge of felony embezzlement, after he and an "unidentified female accomplice" (presumably the same Madame Karnovah who was also operating in the same cities during the same period) swindled a woman named Hulda Jacobson out of her life savings, which amounted to $750.

Karnovah fled San Francisco in September of 1902 and opened a new business at 521 Broad St. in Beloit, Wisconsin, the following year. He found his way to the mining boom town of Lead, South Dakota, one year later and then relocated to nearby Deadwood. He must have had a compelling reason to leave South Dakota in a hurry; the local paper, which printed the names of addressees with unclaimed mail accumulating at the post office, listed the name "G.H. Karnovah" for years afterward. By 1905, he had set up shop in Topeka, billing himself as "Chicago's favorite clairvoyant" and two years later he was plying his trade in Syracuse.