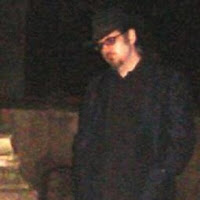 One of the most rewarding aspects of running a website like Journal of the Bizarre is that you get to meet all sorts of interesting people. Since its not every day we get to pick the brain of a professional stage magician and paranormal debunker, we couldn't pass up the chance to speak with Rumanos the Conjurer, otherwise known as Daniel Rumanos.

Whether you know him as an illusionist, entertainer, author of "The Weird Adventures of Daniel Rumanos" occult mystery series, or as the president of the Dracula Society of Maryland, one thing is clear-- he's one of the most fascinating people we've ever had the pleasure of interviewing.

So now, without further ado, let's get inside the mind of the man described by Tim Weisberg (of SpookySouthcoast) as "The voice of the other side of the paranormal".

JOTB: If so many people didn't readily believe in the "unbelievable", the world would have no need for debunkers. Why, in your opinion, do so many people have such an easy time trusting psychics, clairvoyants and so-called paranormal researchers? It seems that, in today's society, many of us are sorely lacking critical thinking skills.


JOTB: Obviously, you've encountered your share of phonies and frauds. When it comes to paranormal frauds (such as clairvoyants or psychics), are these individuals intentionally duplicitous? Or do some of them fervently believe that they possess genuine abilities?

Rumanos: There are both. Human beings are infinitely capable of deceiving themselves without even realizing it. I have for instance, myself known people who started out as fake, carnival tent-show “evangelists” who ended up believing they were actually on a mission from the Almighty.

Rumanos: People believe what they want to believe. They most obviously faked photo in the world will always have its champions, swearing it proves their pet theory or whatever. It is a shame, really, as the
preponderance of cameras now could have otherwise easily proven or disproved such things as the UFO phenomena, Bigfoot, the Loch Ness Monster, and so forth. Instead, due to the possibilities of such easy
fakery, it has just become all the more muddled.


JOTB: What are your thoughts on E.V.Ps (Electronic Voice Phenomena)? It seems to me that out of all possible forms of paranormal "evidence", E.V.P.s would be the easiest thing to fake.
Rumanos: Anyone who wants to know what “EVPs” really are can do this: Get a white-noise machine and turn it on with the idea that you are going to hear “voices” in the sound -- and you will! It is the human mind
struggling to make patterns out of chaos, just as you can pretend to see a picture of a face or whatever in a random design in the carpeting. I have never heard a supposed “EVP” (aside from obvious
intentional fakes) that is anything but this.


JOTB: Now for a "chicken or egg" question. From Harry Houdini to James Randi to Penn and Teller, it seems that trained stage magicians have a fondness for exposing fakes and quacks. Is there something about a magician's training that awakens this desire to debunk? Or do you think that people who are naturally skeptical simply just gravitate toward magic?

Rumanos: There is also the factor that magicians are entertainers, and therefore ultimately concerned with the happiness of the public. Fake psychics/mediums/paranormal frauds of all types tend to seek fame, money, adoration or whatever by frightening people, not by offering straight-off enjoyment. Debunking paranormal claims could perhaps be, to those of us who do so, a form of fighting against psychological terrorism.


JOTB: I've always been fascinated by hoaxers, con artists and frauds because so many of them show remarkable cunning and ingenuity. From your own personal experiences, have you come across any truly remarkable or ingenious methods or techniques used to trick the public?

Rumanos: Certainly, but they don’t really seem so remarkable or ingenious to me because I am an old carny type and have seen it all before, presented as what is: entertainment.


JOTB: Let's talk a little about the Dracula Society of Maryland. According to your website, the Dracula Society is "a non-profit organization dedicated to the serious study of Classic Horror Films, Gothic Literature, and the Supernatural". What can a person gain by studying classic horror films?

Rumanos: Supernatural horror films and literature teach us that no matter how scary such things seem, they are fantasy and illusion. They fulfill a certain need for thrills in a safe way, unlike certain forms of entertainment that claim to be “reality”.


JOTB: I'm sure many of our readers are fans of horror films. Got any personal favorites you'd recommend?

Rumanos: The Hammer Films of the 1960s are, for me, the epitome of what horror cinema should be. The studio was not high budget, and solved this problem by using good acting, writing, and so on. I know of some independent filmmakers whose approach to doing horror is to use their whole budget on special effects and then get amateur actors who will work for free. That is precisely the wrong way round!


JOTB: Finally, let's go back to paranormal debunking. Was there ever a situation where you had to admit that an authentic paranormal occurrence had taken place?

Rumanos: No, but I do maintain and open mind, and do not consider myself a professional “skeptic” by any means. I am still willing to be convinced.