The Canton Church Apparition: A Minnesota Miracle or Hypnotic Hoax? 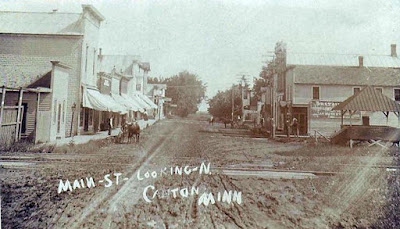 In 1892, residents of the tiny village of Canton, Minnesota, noticed something strange about one of the windows of the village Catholic church. Believed by the residents to be a genuine religious apparition, the bishop was called in to investigate. What ensued next is still, more than a century later, a topic of conversation in Fillmore County. Was the Canton apparition an authentic miracle? Or, as some believe, was it the result of a charlatan priest's "power of suggestion"?

The following appeared in the Philadelphia Times on October 1, 1892.

An Apparition on the Window

It Startles the Inhabitants of a Minnesota Town

Winona, September 30.-- The peculiar manifestations in a window of the village church of Canton, Minn., which have been creating considerable excitement among the Catholics in that section, are to be scientifically examined by Bishop Cotter, of the diocese of Winona, within whose jurisdiction the so-called miracles exist.
Several weeks ago the inhabitants of Canton were startled by the announcement that a portrait had, by divine means, been imprinted on a window of the Catholic church there. The news spread and thousands visited the village daily. At first the apparition appeared to consist of a woman with an infant in arms, and at times a dim halo was discernible about her head. The story then took the form that this was a portrait of the Virgin Mary and the Christ child, and the crowds of visitors increased tenfold. Paralytic cripples and other afflicted persons came in droves and, after a glimpse of the pictures, threw away their crutches, exclaiming that they were cured.

Then the apparition took new form, and visitors claim that about 4 o'clock in the afternoon four figures were discernible, bearing resemblance to Biblical characters. These would gradually fade away, giving place to the original mother and babe. The matter finally attracted such widespread attention that Bishop Cotter visited the church in company with Father Coyne, of Lanesboro, and Father Perrine, of Brownsville.
The window, which was in the north gable of the church, was removed and the Bishop brought it to Winona, where he will give it a thorough examination in company with other prominent Catholic clergymen. The Bishop is of the opinion that the glass, which shows a slight discoloration, was once a church window, and that the attraction of an adjacent building allowed the light to strike it at an angle which rendered the figures visible.

Nineteen pairs of crutches are nailed to the church walls, the result of alleged cures performed by the Virgin Mary, whom the pilgrims firmly believe is present and helps the sick who come to the church. Crowds are flocking to Bishop Cotter's residence, but he declines to let any one see the window until after the examination has been made.


On November 1, Bishop Cotter ordered the closing of the Church of the Assumption in Canton so that all of the glass windows could be replaced with plain pine boards. But that didn't stop the supernatural claims; in fact, numerous witnesses claimed to have seen similar images on the boards. By the summer of the following year, Catholics from all over the country descended upon the Canton church.

One reporter from the Associated Press even went so far as to declare that the pastor of  the church, Rev. Jones, used "hypnotism" to fool the church visitors. From the Chicago Inter-Ocean, July 20, 1893:

A very good man by the name of Jones has been the priest at this Catholic church. Mr. Jones is the celebrated magnetic and spiritual healer known throughout the East, especially in Philadelphia, and who, it is claimed, performed some good work in relieving pain for a short time. At this business he continued until he attained a large fortune, not in charges but in gifts, for it was his method to take what was offered.

The majority of his patients were credulous and looked upon his "miraculous" powers as those from another world and an omnipotent hand. Losing a large amount of his patronage, however, he came here as a priest... Fearing he would lose his pastoral mission, Father Jones and his followers invented, it is said, this picture on the window scheme. There is in reality nothing to be seen on this board or on the front of the altar, but Father Jones is possessed of that power known as hypnotism... This is true, for those who see this apparition are riveted to the spot and cannot turn away from the "vision" until the "operator" has brought them out of the hypnotic state, at which time the "appearance" vanishes.

Whatever the claim may be regarding this "wonderful face on the board" there is nothing in it, for your correspondent thoroughly investigated and knows the whole thing is hypnotism.

Unfortunately, "Father Jones" seems to have disappeared from the records of local history, leaving his life story-- and the so-called Miracle of Canton-- a Minnesota mystery.
miracles religion unsolved mysteries