The Paranormal Experience of Telly Savalas 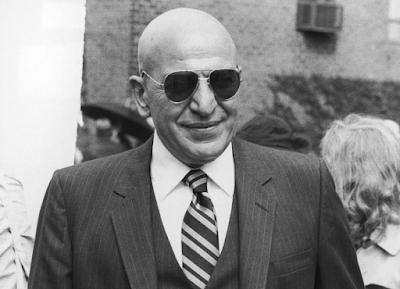 "Something happened in my life which scared the hell out of me," the late actor of Kojak fame told an Australian television show, The Extraordinary, in 1993. "For something like that to happen to me, is something I can't understand to this day." Less than one year before his death, the famous actor appeared on a paranormal television show to talk about his strange brush with the unexplained.

According to Savalas, the incident took place in Long Island, long before the actor made a name for himself. It was around 2 o'clock in the morning and Savalas was on his way home after a date when his car ran out of gas. Savalas walked to a  White Castle restaurant to ask for directions to the nearest gas station. The restaurant employee told Savalas to cut through a wooded area until he reached a highway, where he would find a service station that was open all night.

The actor began to walk towards the woods when he heard a voice from behind, offering to give him a ride. Savalas turned around and saw a man in a Cadillac. He was wearing a white suit, recalled the actor. He got into the Cadillac and asked the driver to take him to the gas station.

When they got there, Savalas realized he didn't have money for gas. As he fumbled around his pockets, the stranger in the white suit offered to give him a dollar. Savalas accepted the money, but insisted on getting the man's name and address so that he could pay him back when he got a chance.

Savalas filled up a gas can and he and the stranger drove back to the Telly's car. That's when things began to get strange. Out of nowhere, the driver in the white suit said that he knew a very well-known baseball player, an infielder for the Boston Red Sox. Savalas thought this was weird, since neither of the men had been talking about sports or baseball. "It's so bizarre he would say that-- and in the spookiest voice I ever heard," recounted Savalas.

The stranger helped Savalas refuel the car and even helped push the vehicle in order to get it started. Telly thanked the stranger and went home.

The next day Savalas went to his job-- he was employed by the US State Department after serving a three year stint in the army during WW2-- and while he was on his way home he heard a news report about a baseball player who died. It was the same player the mysterious stranger claimed to know-- the infielder for the Boston Red Sox.

Savalas was so rattled that he told his mother about the experience. While re-telling his story it suddenly dawned on Savalas that he still had the paper in his pocket; the scrap of paper upon which the stranger had written down his name and address so that Telly could repay him the dollar he had borrowed. A telephone number was written down. The actor called the number, and it was answered by a man. "Jimmy's Bar," he answered. Savalas asked to speak to the man whose name was written down on the scrap of paper. "Just one minute," replied the voice.

A woman came on the phone and asked what he wanted. When Savalas told the woman the name, she said he wasn't there. "When will you expect him?" Telly asked.

Savalas couldn't get over the strange incident, and eventually got in touch with the woman again. She agreed to meet him in New York, although she lived in Boston. They talked, and Savalas described in detail everything about the man who had given him a ride that night-- the clothes he was wearing, the car he was driving, every little detail that Telly could remember.

But there was one strange difference, however. Savalas told the woman that Jimmy had a high-pitched voice. The woman insisted that Jimmy had a low, deep voice. Savalas told The Extraordinary that he later learned that the stranger in the white suit and Cadillac had committed suicide-- by shooting himself in the neck.

Editor's Note: Many skeptics claimed to have debunked Telly Savalas' story, insisting that baseball records do not show a player named "Jimmy" who committed suicide during this time period, or a player from the Red Sox who fit the description given by Savalas. However, further research seems to suggest that Telly simply got his names and cities mixed up-- after all, he didn't go public with this story until decades after the event supposedly happened.

The fact is, there was a player during this time period who actually did commit suicide in the manner described by the late Kojak actor. That player was Hugh Casey, who, in 1951, ended his life with a shotgun blast to the neck after his wife accused him of fathering a child with another woman. This event would have occurred shortly after Savalas earned his first radio hosting gig in New York, where the incident supposedly took place. In Telly's story, the player's widow said her husband had been dead for two years, which places this story in 1953-- a full six years before Telly's first acting gig. Casey played much of his career in New York, pitching with the Brooklyn Dodgers and the New York Yankees.