Why most battlefield hauntings aren't real 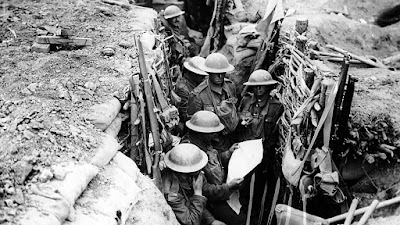 Soldiers fighting in the trenches during WW1 were the first to popularize the idea of haunted battlefields. In France, the region known as "No Man's Land"-- the geographical area between the trenches of opposing armies-- was said to be plagued by ghosts. Soldiers from both sides described the phantoms of No Man's Land similarly; as luminous cloud-like forms that slowly rose from the ground and then hovered and danced above it.

Stories about the ghosts of the battlefield were so common during the war that the United States government actually investigated the claims. One expert who researched the hauntings was Professor Charles E. Munroe, of George Washington University, who was also the government's chief expert on explosives.

Munroe's chemical analysis of the human body revealed that the body of a man of average size contained approximately 55 ounces of phosphorus, seven-eighths of which are in the bones. Munroe concluded that phosphorus was the secret to the hauntings which hundreds of soldiers claimed to have experienced in the trenches of France.

As the unburied body of a dead soldier decomposes, the calcium from the bones reacts with the phosphorus and, if enough moisture is present, creates a gas that is luminescent. On still, damp evenings, when there isn't enough of a breeze to disperse the gas, it rises from the ground and lingers in the air. Munroe speculated that the highly excited imaginations of stressed-out soldiers were responsible for interpreting the clouds of glowing gas as human forms.

Munroe proved his theory by performing an experiment. He manufactured a "corpse light" by placing a scrap of phosphide of calcium into a saucer filled with ordinary water. A weird and spectacular effect was produced, virtually identical to the strange objects seen over No Man's Land.

Prof. Munroe also discovered that there are three other substances in the human body that could create spooky effects when released into the atmosphere: nearly two ounces of magnesium, and two and a half ounces each of sodium and potassium. Munroe estimated that a single human body, in total, contains sixty ounces of substances that could produce glowing apparitions similar to those seen by the soldiers.

Munroe was not the first to theorize that ghosts were composed of glowing gases, however. That distinction goes to a professor named Washington Jefferson McGee. Dr. W.J. McGee was a well known ethnologist of the late 19th and early 20th centuries, and once served as the president of the National Geographic Society (he was also the magazine's associate editor). Dr. McGee was fascinated with stories of graveyard hauntings, and resolved to solve the mystery with science.

McGee encountered many graveyard ghosts during his research, but was puzzled why these "phantoms" always seemed to disappear whenever he attempted to approach them. McGee never solved this part of the riddle, but observed that the same "disappearing act" took place whenever people approached a will-o'-the-wisp, which is nothing more than luminous gas produced by decaying vegetation.