Did Aliens Sabotage SpaceX Launch? Our Money is on the US Gov't. 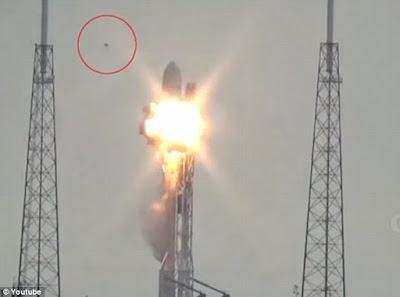 September came in with a bang... at least for Elon Musk and his ill-fated SpaceX Falcon 9 spacecraft, which burst into flames on its Cape Canaveral launchpad during a routine check, taking a $200 million Facebook satellite along with it. Elon Musk, CEO of SpaceX, stated that the explosion originated around the upper stage oxygen tank of the 604-ton rocket. Musk is still scratching his head over the cause.

Conspiracy theorists, however, have speculated that there may be a connection between the explosion and a strange "anomaly" which appeared to fly over the rocket before, during and after the explosion. This unidentified flying object has led many to believe that the explosion was caused by an alien air strike.

While one individual claims to have seen the UFO hover over Falcon 9 with their own eyes, others insist that the anomaly in question is a bird. However, a man claiming to be one of the welders at Kennedy Space Center claims that he observed "strange lights" above the launchpad prior to the launch.

Journal of the Bizarre has an alternative theory.

Our guess is that the anomaly in question is nothing more than a U.S. military drone equipped with EMP technology, as part of a government experiment to see if it was possible to detonate an ICBM via unmanned aerial aircraft.

Hey, if you ask us, that explanation is far more plausible than little green men from outer space.