David Rice Atchison: The Man who was President for One Day 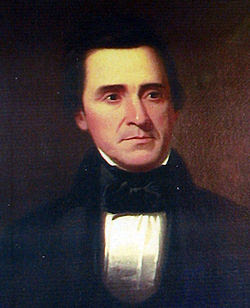 Being that today is Election Day I thought it would be fitting to write about something presidential. And, being a website devoted to the strange and bizarre, the logical choice would have been to write about something spooky, like White House ghosts or some other aspect of Washington's haunted history. But, as entertaining as they may be, those types of stories have already been done to death.

Instead, today's post is about my favorite U.S. president. No, I'm not talking about Honest Abe or Thomas Jefferson or FDR. I'm not even talking about John Tyler (he was our 10th president, in case you had forgotten). I'm talking about David Rice Atchison-- a man forgotten by most, but remembered by few as the man who was "President for One Day".

Atchison was born in Kentucky in 1807 and studied law at Transylvania University in Lexington, where his classmates included several future prominent American politicians and the future President of the Confederacy, Jefferson Davis. In 1830 he relocated to western Missouri and set up a law practice. As a lawyer, Atchison was enormously successful and he represented numerous high-profile clients of the era. Perhaps his most famous client was Joseph Smith, who turned to Atchison for representation involving Mormon land disputes.

Atchison entered politics in 1834, when he was elected to the Missouri House of Representatives. He was instrumental in negotiating the Platte Purchase of 1836, which extended the state's boundaries (if you've ever looked at a map of Missouri and wondered about that little nub projecting from the state's northwest corner, you can thank David Rice Atchison for that). He won re-election in 1838 and became a circuit court judge three years later. Tiring of the limelight, he moved to Platte County and earned a modest living as a county commissioner in 1843.

By this time, Atchison probably thought his best political days were behind him. Little did he know that he was about to make history, even if his lasting legacy was destined to be nothing more than a footnote in a book of political curiosities.

On October 3, 1843, the much-beloved United States senator from Missouri, Lewis F. Linn, died of a heart ailment at the age of 46. Atchison was appointed to fill the vacancy. Even though he was considered by many a political has-been, at 36 he was still young enough to make a comeback. He won re-election to the U.S. Senate in 1849 and gradually won the support of his Democratic colleagues, who chose him as President pro tempore of the Senate. This placed David Rice Atchison third in the line of succession for the Presidency of the United States.

President James K. Polk's term expired at noon on March 4, 1849, which happened to fall on a Sunday. Being a man of strict religious conviction, the newly-elected President, Zachary Taylor (who was also Polk's Vice President), refused to be sworn into office on a Sunday. With Polk and Taylor technically out of office, the role of the Presidency fell upon the President pro tempore of the Senate-- David Rice Atchison.

Atchison is my favorite American president not just because of his anonymity, but because of the way he spent his few hours as President of the United States of America-- largely, in bed sleeping like a log. In a newspaper interview, Atchison described his activities on the day of March 4, 1849:

"There had been three or four busy nights finishing up the work of the Senate, and I slept most of that Sunday."

While most historians disagree, I believe this makes David Rice Atchison the most successful president in American history; having spent the entirety of his term in a state of unconsciousness, Atchison didn't have an opportunity to fuck anything up. On Atchison's watch, not a single war was fought and not a single tax was raised. Since he didn't even run for the position, he had no opportunity to break a single campaign promise.

And if that doesn't make David Rice Atchison the best damn president this country has ever seen, I'm not sure what does.