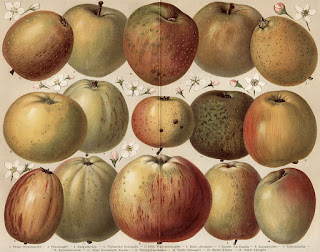 From the Granny Smith to the red delicious, there are hundreds of varieties of apples-- but only one of them recalls the legend of a blood-chilling murder.

This particular variety of apple comes from New England and traces its roots to Norwich, Connecticut. It has fair, firm yellow skin and excellent flavor and each individual apple, when cut in half, exhibits a red speck, like a drop of blood. Known locally as the "Mike" apple, this variety is named after a 17th century farmer named Micah Rood.

Micah was the son of Thomas Rood, one of the earliest settlers of Norwich. As a youth he dutifully tended and cultivated his father's fertile acres but one day his habits changed. He became gloomy and restless and began shirking his duties in favor of whiskey. He lost interest in his work and stopped attending church. He was shunned by his neighbors, many of whom believed that Micah had fallen under a witch's spell.

One spring, after winter melted away and the countryside burst into blossom, somebody noticed that the flowers of one particular tree had inexplicably changed from white to red. It was Rood's tree, and it was a tree the young man was fond of sitting under. Micah, it is said, had developed a peculiar fondness for this particular tree, although nobody knew why. August came and the red blossoms grew into fruit. When the large yellow apples from the tree were harvested and cut open, each one was found to contain a red bloodlike globule inside.

These strange apples created a sensation around Norwich and deepened the mystery of Micah Rood's unusual behavior. It was soon recalled that, during the previous fall, a traveling peddler had passed through the area, spending the night at Rood's house. The visitor was never seen nor heard from again. A rumor began to spread that the young farmer had killed the peddler for his money and buried the body beneath the apple tree.

Search was made for the body, but in vain. None of the missing peddler's possessions were found in Micah's house. But still the locals believed firmly that Rood had murdered the man, although Micah never confessed to the crime.

Rood's farm gradually fell into disrepair and decay. The fields became grown with weeds and the barn grew bent and twisted beneath the weight of its sagging, neglected roof. Micah Rood, his mind and fortune gone, became a wandering recluse and a penniless drifter until the day of his death in 1728.